Get the app Get the app
Get the latest news on coronavirus impacts on general aviation, including what AOPA is doing to protect GA, event cancellations, advice for pilots to protect themselves, and more. Read More
Already a member? Please login below for an enhanced experience. Not a member? Join today
News & Videos Santa Monica compass rose proposed as historic landmark

An iconic aviation image painted on the pavement of a California airport could be designated a historic landmark if a municipal board approves a pilots’ proposal at a Sept. 9 hearing. 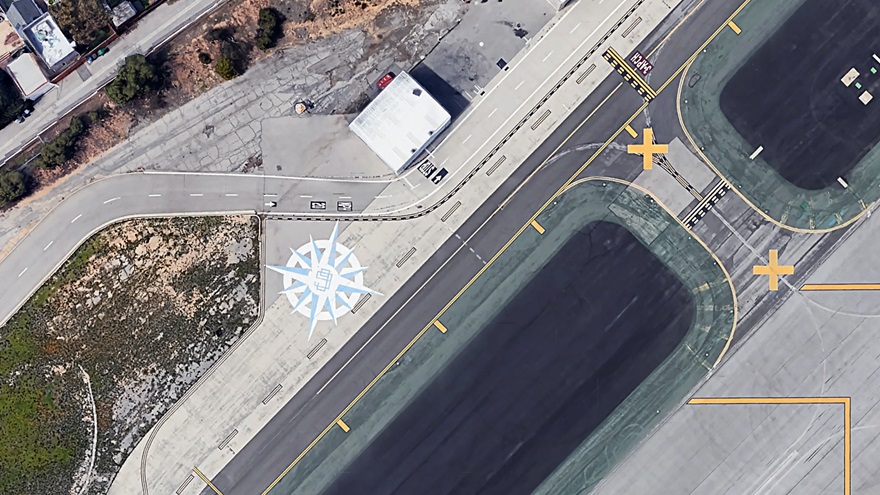 AOPA has written a letter of support urging the Santa Monica Landmarks Commission to approve the Los Angeles Chapter of The Ninety-Nines International Organization of Women Pilots’ application to confer historic-landmark status on the compass rose located near the southwest corner of Santa Monica Airport.

Protecting the rose became a priority for area aviators after work associated with a controversial runway-shortening project infringed on the image. The hearing will be held at Santa Monica City Hall, 1685 Main Street, at 7 p.m. on Sept. 9.

The Santa Monica compass rose, maintained by The Ninety-Nines, has a diameter of approximately 50 feet and a circumference of 160 feet. In its center appear two blue interlocking “9” numerals enclosed in a white circle. The compass rose was first painted in its current location in 1988, although compass roses have been a feature of the airport since 1929, according to the application.

“The International Ninety-Nines’ Compass Rose logo and monogram was designed by Los Angeles chapter member Wilma Fritschey in 1939, and is still used today,” the Los Angeles Chapter notes on a page on its website publicizing the preservation effort.

“The Compass Rose also provides a unique, significant and historical ground feature as pilots traditionally calibrated their compass according to the orientation of the markings on the ground. The Ninety-Nines logo is prominently featured at the center of the Compass Rose and has been so displayed for many decades,” it adds.

In his letter of support, AOPA Senior Vice President of Government Affairs Jim Coon noted that the aviation industry played a significant role in the development of the city of Santa Monica, with “legendary aviators” once active at the airport including Amelia Earhart, Pancho Barnes, Bobbi Trout, Blanche Noyes, and Phoebe Omlie.

“The Compass Rose is emblematic of over 90 years of the history of women in aviation, with roots grounded in Santa Monica,” he wrote, urging the landmarks panel to act on an opportunity to “save a cultural and historic Landmark identified with historic personages” that “embodies the use of a unique design in a unique location.”