Get the app Get the app
Get the latest news on coronavirus impacts on general aviation, including what AOPA is doing to protect GA, event cancellations, advice for pilots to protect themselves, and more. Read More
Already a member? Please login below for an enhanced experience. Not a member? Join today
News & Videos Baker tells Senate AOPA still against privatization 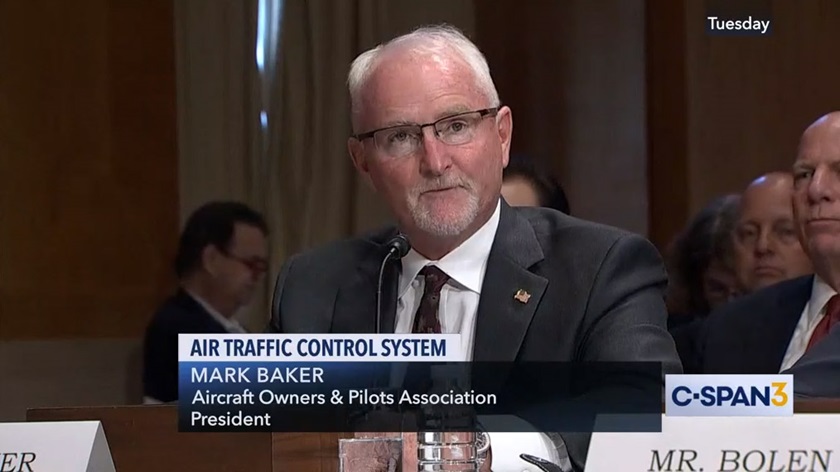 Baker told members of the Senate Aviation and Space subcommittee on Sept. 24 that private control of an air traffic management system that handles more than 44,000 flights a day would do nothing to reduce delays, lower ticket prices, or speed up modernization. He said it also could have devastating consequences to small and rural airports.

“As you know, the past two years were spent dealing with a proposal calling for the privatization of our ATC system,” Baker told the subcommittee during the hearing held to consider air traffic control improvements.

“I don’t want to speak for others here today, and I could be wrong, but I don’t believe anyone wants to revisit the issue that has and will continue to divide us,” Baker said. “We have seen where ATC privatization hasn’t worked well for general aviation in other countries and we don’t want to go down that path.”

Senator Ted Cruz (R-Texas), chairman of the Subcommittee on Aviation and Space, wants to “reset” the conversation on ATC reform and not "rehash old fights."

“I want to make clear from the start that, while I'm sure the air traffic control reform efforts of previous Congresses are on the minds of all of our witnesses today, that's not what this hearing is about," Cruz said in his opening remarks. "While those efforts and the members who engaged in them—including the ranking member of this subcommittee—showed bold leadership in challenging the status quo, we are not here today to rehash old fights. The purpose of the hearing to examine the current landscape, to discuss what works and what doesn't, and what you, the stakeholders, like and don't like, and to open a new avenue for dialogue.”

Airlines for America pushed for privatization efforts in the last Congress, but testified that the organization accepts that Congress chose not to go down that path. Sharon Pinkerton, the organization's senior vice president for legislative affairs and policy, made that clear in her own testimony:

“To address the proverbial elephant in the room, it is widely known we supported efforts (during the) last Congress to transform the governance and funding structure of the FAA’s Air Traffic Organization  to a commercialized nonprofit model," Pinkerton said. "That being said, we are political realists and accept that Congress chose not to adopt that proposed solution. As a result, we are now challenged to fill the void left by a lack of transformational reform and instead are focusing our efforts on making the best of the status quo. As the largest users of the system, we will continue to work collaboratively with all stakeholders on implementation plans for system improvement.”

Baker told the subcommittee that AOPA shares a desire to improve efficiency and reduce cost, and that “we are ready and willing to work with all industry stakeholders and Congress to advance the consensus needed to improve our current system.” As part of AOPA’s efforts to support ATC modernization, Baker said he has had the privilege of serving on the FAA’s NextGen Advisory Committee, commonly referred to as the NAC, for nearly six years, and it is “one of the best government-industry collaborative efforts that I am aware of or have been associated with.”

Baker also noted that the primary NextGen challenges that remain are the need for GA operators to equip their fleets with Automatic Dependent Surveillance-Broadcast Out technology, controller training on new systems and procedures, and continued flight path routing procedure development (commonly referred to as Performance Based Navigation). In response to a question from Senator John Thune (R- S.D.) on the ADS-B Out 2020 mandate, Baker said he would urge the subcommittee to encourage the FAA to provide another round of rebates that would further spur the GA equipage rate.

Baker also took the opportunity to remind senators that aviation remains a workforce engine that offers vast potential to create jobs for the next generation of pilots, controllers, and technicians. He called on lawmakers to fully fund the aviation workforce development programs created in the 2018 FAA reauthorization act.

“As the Committee is aware, in order to meet bold challenges, we need bold initiatives. Recognizing this, I am hopeful the Committee will work with Senator Jim Inhofe of Oklahoma and others to establish a National Center for the Advancement of Aviation,” Baker said. “We strongly believe standing up such a center will facilitate cooperation, collaboration, and coordination across all sectors of aviation—civil, commercial, and military—and which is so desperately needed.”