Get the app Get the app
Already a member? Please login below for an enhanced experience. Not a member? Join today
News & Media Great experiment

The Canadian prairie is a harsh place in winter. Whipping, sub-zero winds roar down from the arctic, and nothing in the flat, featureless terrain even slows them down. But it’s here, at an oil-patch town in Saskatchewan, that AOPA found its 2020 Sweepstakes RV–10—a diamond in the rough that will undergo a transformation—giving AOPA members new insights into the performance, technology, and value that can be found in Experimental/amateur-built aircraft. 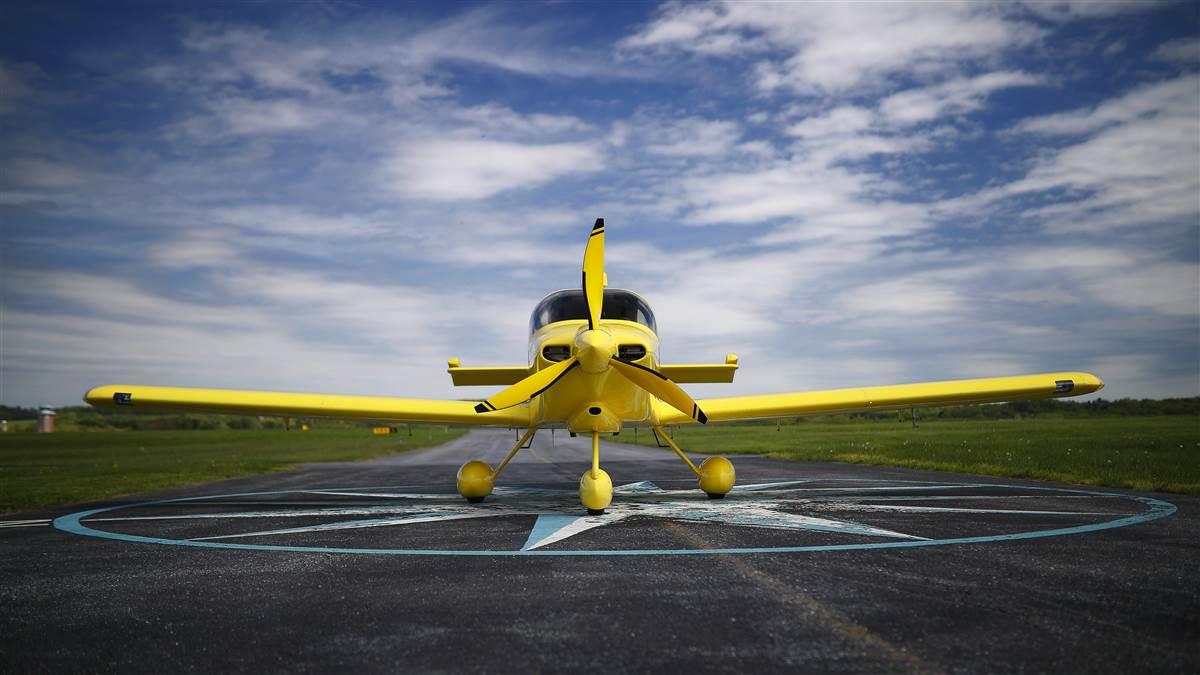 Kits, plans, and thousands of hours in your garage

Although AOPA’s tradition of giving away an airplane goes back decades, the Van’s RV–10 is AOPA’s first Experimental/amateur-built sweepstakes aircraft. Experimental/amateur-built aircraft are built from kits—as is the case with the popular RV line designed by Richard VanGrunsven—or plans, and may not be used for commercial purposes (see “Build, Train, Fly,” p. 45). Because they are registered in the Experimental category, they are not subject to the same costly certification requirements as FAR Part 23 aircraft, but they still must be registered with the FAA, be issued an airworthiness certificate, and go through a condition inspection every 12 months. The lower certification costs for Experimental avionics and parts allow many builders to install safety-enhancing equipment much more cheaply than installing similar equipment on certified aircraft. Not to mention the significant cost savings on the airplane itself—if you’re willing to put in the sweat equity. The Experimental Aircraft Association estimates an average homebuilt aircraft will take 1,000 to 3,000 hours to complete. —Sarah Deener

“This airplane was built in 2007 and it’s been flown regularly and well maintained during the time I’ve owned it,” said Rod Benning, a Canadian trucking company operator, who owned the Van’s RV–10 for more than six years before selling it to AOPA in early 2019. “But as you can see from the chips in the paint [where gravel hit the leading edges], the airplane hasn’t been babied. I learned to fly in it, and so did my partner, so it’s done more than its share of takeoffs and landings—and not all of them were things of beauty, if you know what I mean.”

Benning, 55, is stocky and gruff, has a thick beard, drives a Ford F-250 pickup, and seems impervious to cold. He wears a short-sleeve Harley-Davidson shirt and no jacket on a 20-degree Fahrenheit day and calls the weather “mild, bordering on a heat wave.”

Benning is quick to laugh, particularly at his own foibles; seems to know just about everyone in Estevan, his hometown of 10,000 people a few miles north of the North Dakota border; and his accent could have made him a character in the movie Fargo.

He breezed through flight training, then used the RV–10 primarily for cross-country trips to visit a daughter in Edmonton, about 600 miles away. But when his daughter and her family moved closer to home, Benning’s rationale for owning an airplane disappeared.

“I’ve got to have a purpose to fly, and that purpose went away,” he said. “I know that if I kept the airplane it would end up sitting in a hangar, and that’s no good. Better to let it go where it will keep flying.”

Benning bought the airplane with a partner who also received dual instruction in the airplane and soloed in it. But his partner never followed up with the knowledge test or checkride and didn’t become a private pilot.

“He was the perfect partner in a lot of ways because he paid half the costs and hardly ever flew,” Benning said. “But I would have felt better if he would have taken the checkride and completed the process. He was just too busy with work and family life, I guess.”

My first impression of the RV–10 is that it sure is yellow—but not just one yellow.

Even under the fluorescent lights in the dim T-hangar, it’s obvious the wing tips and fuselage are different shades. The tips are banana, the fuselage is mustard. Black and green accent marks on the fuselage are vinyl, so I disregard them since they’re sure to be peeled off early in the restoration process.

More than 33,000. Number of amateur-built aircraft certified by the FAA.
10,467. The number of RV aircraft completed and flown, as of May 9.
51 percent.  Portion of the aircraft that an individual must build for the aircraft to be registered in the amateur-built category.The airplane’s metal work appears excellent, the fiberglass fit and finish is very good, and the plexiglass is free of crazing. The airframe seems almost perfectly straight and well rigged, and the fixed trim tab on the rudder is barely deflected.

The 260-horsepower Lycoming IO-540 from Aero Sport Power in British Columbia was installed new when the airplane was built, and it has flown about 620 hours since then. It also had a top overhaul with six new Lycoming cylinders about 250 flight hours ago when some of the exhaust valves showed unusual wear. The three-blade MT propeller appeared normal, other than the fact that it, too, was painted yellow. 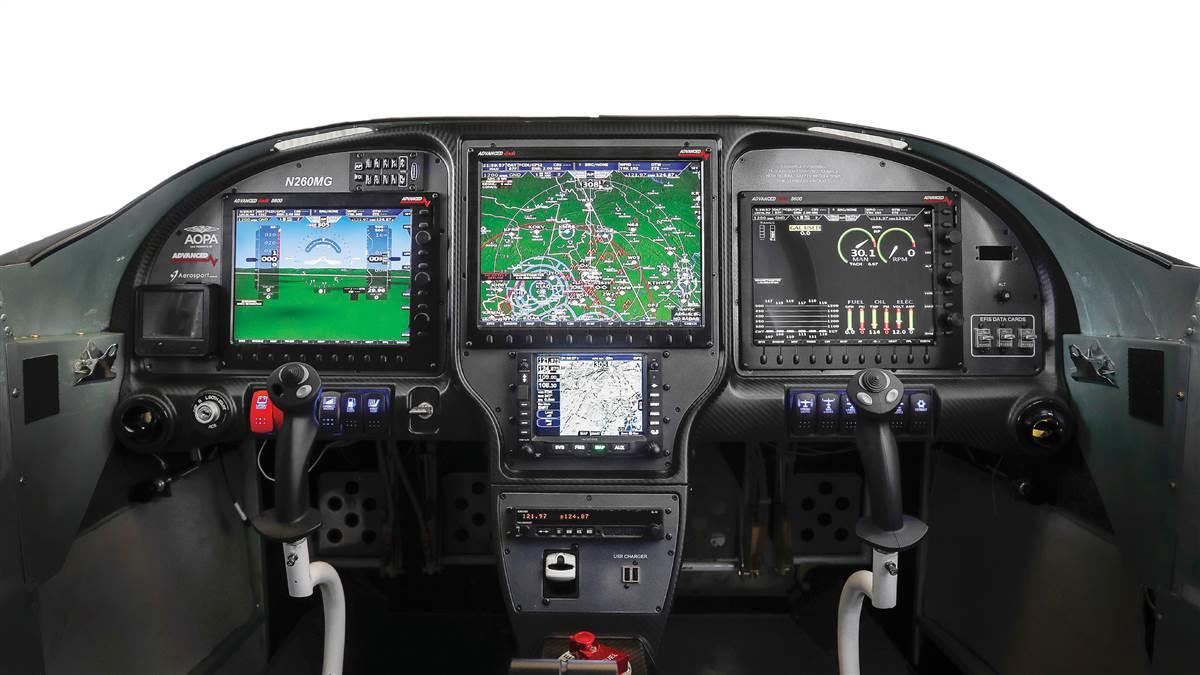 AOPA updated the panel with three big, bright screens by Advanced Flight Systems that provide graphical information about the airplane and its surroundings, including flight instruments, engine health, weather, traffic, terrain, and navigational information. An Avidyne IFD 550 supplies the avionics suite’s brain power—and it can also show GPS-based synthetic vision on its own touch screen. Pilots can customize the screens. 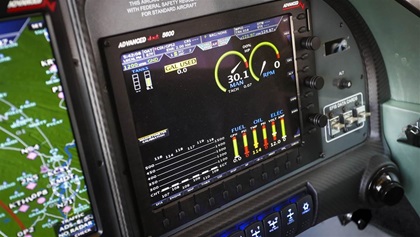 Inside, the bare-bones interior was functional with comfortable, cloth-covered memory foam seats. The instrument panel was state of the art at the time it was built, with three 7-inch GRT screens and a Garmin 496 portable GPS. But the pace of improvement in avionics is so rapid that the panel seemed quite dated. AOPA has since upgraded to a digital panel by Advanced Flight Systems with instrument flight rules capability, and will complete a full refurbishment of the aircraft before giving it away in 2020.

Brushing up and noting differences

Mike Seager is the dean of flight training in Experimental aircraft, having provided many thousands of hours of dual instruction in the Van’s Aircraft RV series.

The low-key pilot and aircraft builder has logged more than 12,000 flight hours teaching in RVs during the past 20 years—and the training looks and feels much like what you’d expect in any other fixed-wing aircraft. Take off from his home airstrip, a turf field at Vernonia, Oregon, (05S) or the Van’s Aircraft factory at nearby Aurora (UAO), climb to a safe altitude, and practice slow flight and stalls. Then return to the airport and spend the majority of your time and effort on takeoffs and landings.

The vast majority of Seager’s transition students are builders or buyers of Van’s Aircraft RVs. If they’re going to fly a side-by-side RV, Seager puts them in the left seat of the training aircraft. If they’re preparing to fly a tandem RV with front and rear seats, Seager puts them on the right side so they’ll have the stick in their right hand and the throttle in the left just as they will in an RV–3, –4, or –8. (Van’s only uses side-by-side airplanes for training.)

I buckle into the four-point harness in the right seat while Benning uses a tow bar on the free-castering nosewheel to pull the airplane outside over the crunchy, dry snow. He opens the gull door on the left side and climbs into the roomy cockpit. Even with his broad shoulders, the 48-inch-wide cockpit is roomy enough to keep us from bumping.

We taxi to Runway 26 at the nontowered airfield and “backtrack,” as the Canadians say, to use the full length. Despite the airfield elevation of 2,000 feet msl, the cold, dry air lowers the density altitude to a negative number: minus 1,300 feet.

The ceiling and visibility are limitless, so the razor-sharp delineation between blue sky and white ground is remarkable in all directions.

Benning hands over the controls and I go through the usual get-acquainted maneuvers: slow flight, stalls, steep turns, and the full range of flap settings. The RV–10’s thick wing is incredibly benign with a gentle, power-off stall break and slight left wing drop at just 48 KIAS. Normal cruise at 75 percent power was 172 knots true airspeed (KTAS) at 5,500 feet with fuel consumption of 11.5 gallons per hour. Economy cruise at 65 percent power was 165 KTAS at 9.2 gph. Normal approach speed at full gross weight is 75 KIAS.

The engine/prop combination is exceptionally smooth.

I brought an electrically heated jacket for what I expected to be a cold and drafty cockpit but, perhaps not surprisingly, this Canadian airplane was fitted with a highly effective heater. In fact, I started to regret wearing a jacket at all.

After a few takeoffs and landings, there seemed no doubt that this RV–10 was an excellent example of the versatile line of Van’s Aircraft designs that dominates the Experimental/amateur-built market with more than 10,000 registered and flying. That initial impression was confirmed the next day when Benning and I made a short hop to Minot, North Dakota, to clear U.S. Customs. Then we flew 1,350 wind-aided nautical miles to Maryland in two legs that totaled seven flight hours.

Tucked away in a hangar at AOPA’s home base in Frederick, Maryland, Benning patted the RV–10 on the cowl and silently thanked it for helping him become a pilot, and carrying him, his family, and friends on hundreds of hours of memorable flights throughout their rugged homeland. 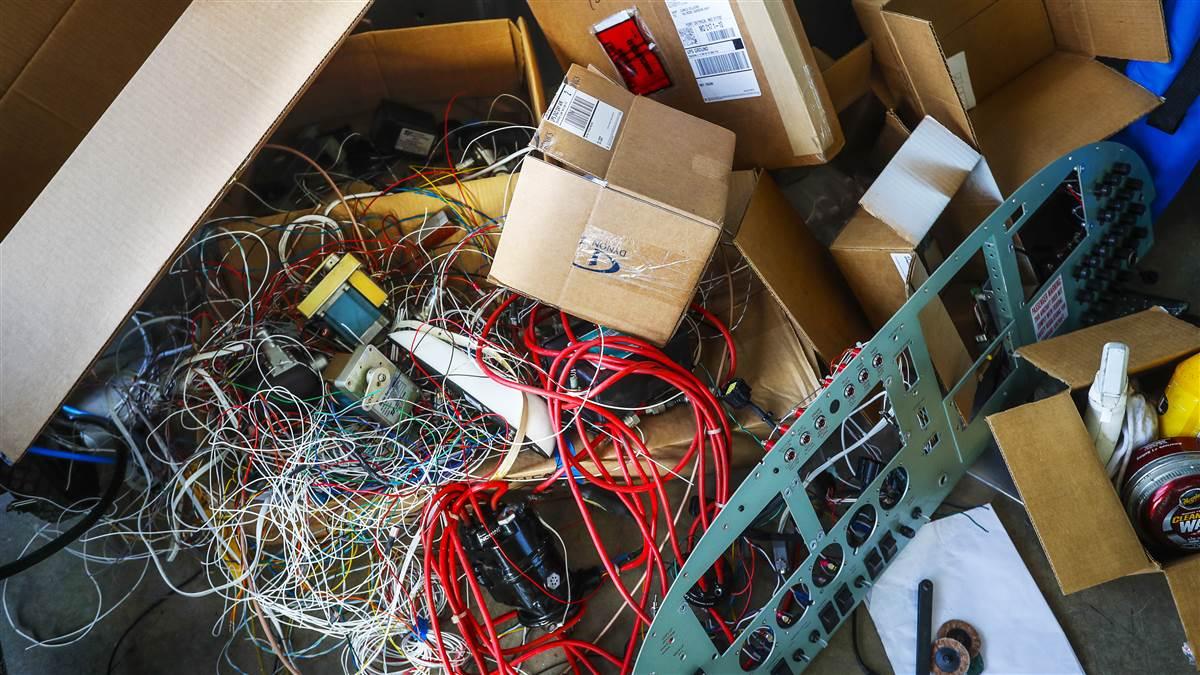 Detritus from the old instrument panel is heaped in a corner of the hangar during the avionics upgrade. All of the AOPS Sweepstakes RV–10’s original wiring was replaced during the new panel installation. It was a big, complicated job that was streamlined by the “Advanced Control Module” (ACM), a comprehensive and unique power distribution system that consolidates the entire aircraft electrical system in a single location. Flaps, trim, autopilot, avionics, lights, and other electronics are connected to the ACM with pre-fabricated and tested harnesses which eliminate hundreds of failure-prone solder connections. The result is a lighter, simpler to operate, and self-diagnosing electrical system that’s far less time-consuming to install.

Aircraft licensed in the Experimental category can’t be used for “compensation or hire”—but there’s a lot they can do.

Want to earn an instrument rating in a kit airplane? That’s allowed.

How about a tailwheel endorsement? That’s permitted, too.

Can you add a seaplane or multiengine rating? Those are approved as well.

LODA requests are submitted to FAA flight standards district offices in the geographic areas where the Experimental aircraft are based, and scores of LODAs have been granted around the United States. Van’s Aircraft, for example, has a network of instructors who teach in RV aircraft as well as from a syllabus for pilots preparing to fly them for the first time (or the first time in a while).

Experimental airplanes—ranging from tube-and-fabric kit airplanes to former military jets are currently being used for pilot training—and the number and variety are likely to grow in the future. —Dave Hirschman 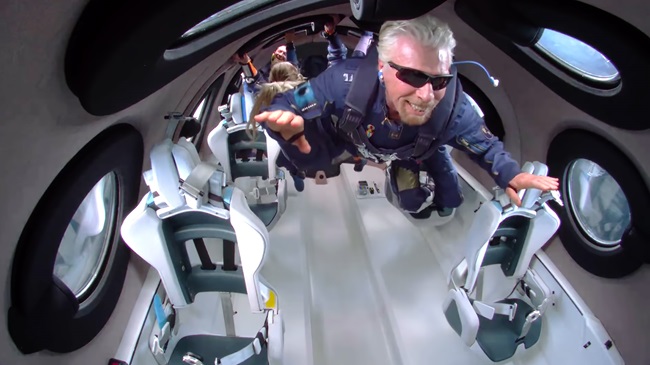