Over the Divide to flatten the curve

A group of volunteer pilots in Colorado delivered more than 300,000 masks across the state. The masks were provided to each public-use airport in the state by the Federal Emergency Management Agency. 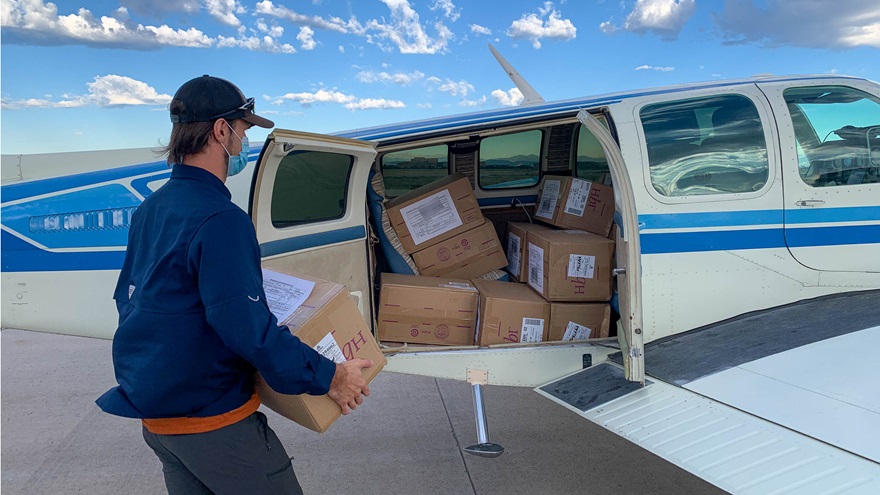 FEMA dropped the boxes of personal protective equipment at Denver International Airport. From there, the Colorado Aviation Business Association and Angel Flight West called upon volunteers to fly them around the state. “So, the question was how to get them distributed,” said volunteer pilot Steve Zimmermann.

The answer was clear: general aviation aircraft. Calling upon the network of volunteers who normally fly medical patients on Angel Flight West missions, organizers assembled a team of several dozen pilots to provide the transportation. “CABA and Angel Flight West got together and organized this mission, and last I heard there was something like 25 volunteer pilots flying their own airplanes,” Zimmermann said.

Zimmermann ponied up his Beechcraft A36 Bonanza. “I had 20 boxes—320 pounds—all in the aft cabin.” The six-seater was well suited for the mission. “You could really tell at the density altitudes we have… the Arapahoe County Airport is at 6,000 feet basically, and it was already starting to get warm. So, I used a lot of runway, but it was worth it, and I got up over the [Continental Divide] at [13,500 feet MSL], crossed the Divide, no sweat, little bit of a headwind,” Zimmermann continued.

The operation was spread over two days, with August 7being a sorting day. Pilots gathered at Signature Flight Support at Centennial Airport in Englewood, Colorado, to load the masks on August 8 and fly them to their destinations.

“This is a unique opportunity for general aviation pilots to come together in a coordinated response to this pandemic,” said Chris Swathwood, chairman of CABA, in a news release. “We hope it will also help to highlight the critical role aviation plays in our state during times of need, as well as the important role Colorado’s smaller airports play in their local communities.”

Zimmermann is no stranger to using his airplane for good. He’s been an Angel Flight West pilot for three years.

“There haven’t been very many patient flights lately because of COVID, but we’ve done several airlifts of material,” Zimmermann said.

“Since the end of March, our volunteer pilots, in collaboration with the Colorado Hospital Association, have been flying PPE to hospitals all over the state,” said Cheri Cimmarrusti, associate executive director of Angel Flight West, in a news release.  “Now we're proud to continue our work by partnering with CABA, and other aviation organizations to help slow the spread of COVID-19 by providing PPE to Colorado’s airports.”

The masks are intended for use by passengers and air crewmembers, as well as staff and tenants at the airports to which they were flown.

Paul Harrop is a producer/video journalist for AOPA Live. He is a new private pilot, currently working toward his instrument rating. He joined the AOPA staff in 2012.