Get the app Get the app
Get the latest news on coronavirus impacts on general aviation, including what AOPA is doing to protect GA, event cancellations, advice for pilots to protect themselves, and more. Read More
Already a member? Please login below for an enhanced experience. Not a member? Join today
News & Videos Copperstate Fly in and Buckeye Air Fair set for February 7

One of the early bird events on aviation’s annual airshow schedule is gearing up under Arizona’s desert sun to put flying back on the map with some help and support from AOPA. 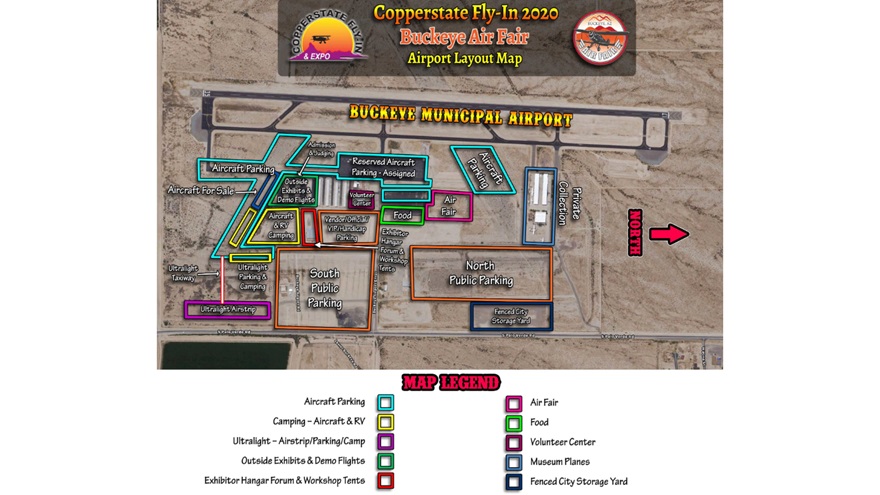 The Buckeye Air Fair and Copperstate Fly-In, scheduled from February 7 to 9, each year draws more than 30,000 people to Buckeye Municipal Airport  just west of Phoenix on Interstate 10.

Also on tap on February 8 in conjunction with the Air Fair will be the sixth annual Arizona SciTech Buckeye Festival, an event providing interactive science, math, and technology activities for youth, adults, and families. Participating SciTech partners represent a variety of science and technology fields and disciplines.

AOPA Airport Support Network volunteers and members interested in joining this volunteer network are invited to attend a meet-and-greet session on February 8 from 10 to 11 a.m. at tent No. 3 of the Exhibitor Hangar Forum and Workshop area at Buckeye Municipal Airport, located at 3000 S. Palo Verde Road in Buckeye. This event provides AOPA’s ASN volunteers an opportunity to get acquainted with their peers on the front lines of general aviation advocacy and interact with AOPA staff.

On February 9, AOPA Vice President of Airports and State Advocacy Mike Ginter and AOPA Western Pacific Region Manager Melissa McCaffrey will host a Pilot Town Hall and Regional Update from 2 to 3 p.m. at tent No. 2 of the Exhibitor Hangar Forum and Workshop area. It’s a chance for members (and prospective members) to engage with AOPA staff and attend a briefing on the key regional and national issues of interest to the GA community.

Eric Orsborn, the vice mayor and District 6 council member, is an AOPA member and Cessna 172 owner who earned his pilot certificate in 2017 after attending ground school with his wife, as he recalled in this video interview. Orsborn—who connected with AOPA at one of our regional fly-ins in 2019 to learn about ways to protect GA as his community expanded—represents the city council on numerous civic panels including the Airport Advisory Board. He is a construction company owner and a member of the Fighter Country Partnership, a group that supports the personnel and mission of Luke Air Force Base.

As a result of Orsborn’s foresightedness, AOPA and city officials will discuss land-use policies in the vicinity of Buckeye Municipal Airport that will keep the airport a safe, vibrant hub of GA activity in the Phoenix area.

“Buckeye, Arizona, is the fastest growing city in the U.S. and the Buckeye airport is vital to this community’s growth. We look forward to working with Vice Mayor Orsborn and the City Council to ensure land-use development that is compatible with the long-term viability of this great airport,” Ginter said.