Get the app Get the app
Already a member? Please login below for an enhanced experience. Not a member? Join today
News & Media Piston trainer surge lifted GA market 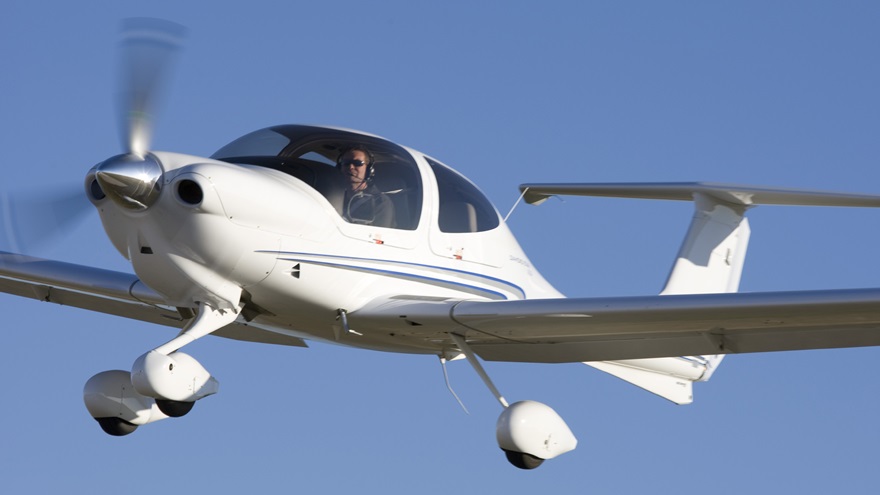 Diamond's DA40 is no newcomer to the training market, having first flown in 1997. In 2019, sales of the DA40 jumped 180 percent to 126 aircraft delivered, matching Textron's Cessna Skyhawk production, according to General Aviation Manufacturers Association data. Photo by Mike Fizer.

GAMA President and CEO Pete Bunce has seen a few rough years since 2008, and appeared visibly enthusiastic about the 2019 market data presented during an hourlong State of the Industry event in Washington, D.C. The 16.4-percent increase in piston airplane deliveries and 15.1-percent increase in business jet deliveries each provided happy news to build on a message of the day that also included a new study on general aviation’s positive effect on the overall economy and jobs.

It also gave Bunce and GAMA Chairman David Paddock (the president of Jet Aviation), who tag-teamed delivering the briefing and leading subsequent discussions, some positive talking points to offset an 11.3-percent decline in turboprop sales (driven largely by reduced demand for aircraft used in agriculture and firefighting), and a much sharper decline in helicopter sales. Piston helicopter deliveries were down more than a third, and turbine helicopters posted an 8.3-percent decline from 2018 to 2019.

Bunce focused much of his attention on the future potential demand that urban air mobility and related innovation will drive, proclaiming the aircraft manufacturing industry “future-ready.”

“We don’t want to look back, we want to look forward,” Bunce said. “This next decade is going to be one of, I think, the most exciting since the dawn of the jet age.”

To that end, the presentation, which lasted a little more than the planned hour, included a panel discussion that addressed a few potential headwinds. Anticipating that the FAA’s practice of delegating certain tasks related to aircraft certification will be reconsidered in Washington, GAMA and other industry players pledged to educate lawmakers on the consequences of radically reforming a system that has posted a generally exemplary safety record along with jobs and economic activity. 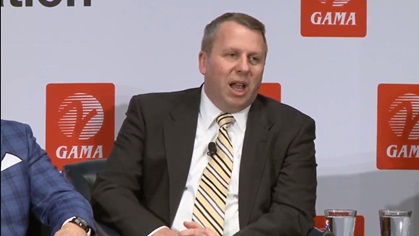 Textron Aviation CEO Ron Draper, whose company celebrated delivering more business jets (206) than any other maker, based on the GAMA report, said during an industry panel discussion that certification of the Citation Longitude in 2019 was the culmination of “the most rigorous certification process on any airplane we’ve done in our history,” and fundamental change to the process would have a profoundly negative impact:

“Product development would grind to a halt in the industry, I mean it simply would not happen,” Draper said.

It is that new product development that explains many of the upsides in the market numbers, according to aviation analyst Brian Foley.

“Those who have invested in new products are reaping rewards now,” Foley said in a telephone interview minutes after GAMA released the numbers.

That includes Bombardier, which, despite recent financial woes and amid reports that the firm is in talks with Textron to sell the Learjet, Challenger, and Global lines, posted a 28.6-percent increase in deliveries of its larger business jet models (all Global deliveries) in 2019.

Rival Gulfstream Aerospace Corp. (a wholly owned subsidiary of General Dynamics) retained its top spot on the aircraft billings chart, however, taking in $7.8 billion from the sale of 147 business jets (all models). That revenue handily outpaced Bombardier’s $5.7 billion, and Textron’s $3.65 billion for all Cessna and Beechcraft airplane sales combined, including pistons, turboprops, and jets. 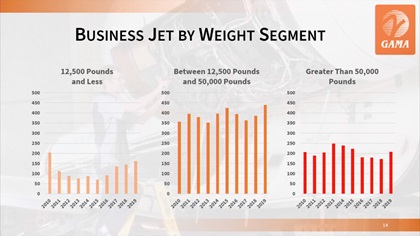 The growth extended to the light end of the business jet market: Cirrus Aircraft accelerated deliveries of the SF50 Vision Jet from 63 to 81 for 2019, and others at the light end of the jet segment also fared well: Embraer’s total jet deliveries increased nearly 20 percent. Honda did not reap quite so many rewards: HondaJet sales declined by one aircraft to 36.

Measured in dollars, business jets drove most of the 14.3-percent increase in total airplane billing, up to $23.5 billion worldwide. But if you’re counting tails, it was piston airplanes that really proliferated. Foley said that has everything to do with the “crazy pilot shortage” as airlines around the world scramble to staff flights.

“It’s driving the pistons,” Foley said of the training market, where the primary consumers include aviation universities and local flight schools. Foley noted, however, that the piston sales increases were not evenly spread. Diamond Aircraft, for example, posted a 74-percent increase in deliveries including all models, catapulting it past Piper in piston trainer sales despite Piper’s 70-percent increase in Archer deliveries.

Cirrus continues to lead the single-engine piston market by a wide margin, with sales of the SR22T alone climbing to 200 units in 2019, up from 180 delivered in in 2018. Cirrus saw its older piston models slip in sales, however, while Tecnam gained a little more market share with 205 aircraft delivered, up 13.9 percent over the firm’s 2018 totals. That includes 8 deliveries of the new P2012 Traveller, the first of many that Massachusetts-based Cape Air plans to place in service.

Textron’s Cessna and Beechcraft piston lines, meanwhile, posted more modest performances. Cessna 172 sales slipped by three aircraft to 126, which happened to match the total DA40 trainer deliveries logged by Diamond Aircraft. The difference being that Skyhawks slipped 2.33 percent while the DA40 total was up an eye-popping 180 percent. Textron’s other piston offerings were also on the flat side: Bonanza deliveries declined by half, down to 7, and Baron sales also slipped 21 percent, from 19 aircraft to 15.

“The piston guys have been beaten down for well over a decade now so it’s refreshing to see these guys putting those out at full tilt,” Foley said of the overall piston airplane market. 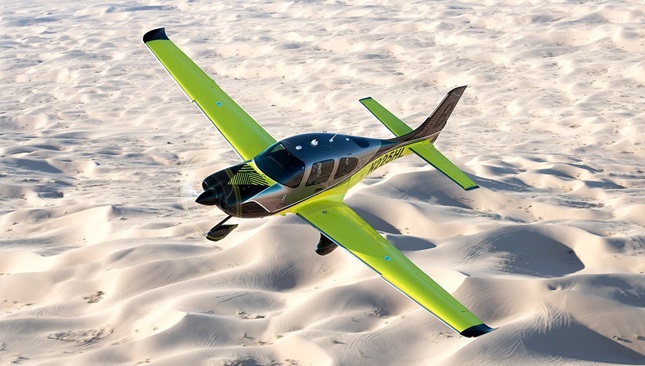