Get the app Get the app
Get the latest news on coronavirus impacts on general aviation, including what AOPA is doing to protect GA, event cancellations, advice for pilots to protect themselves, and more. Read More
Already a member? Please login below for an enhanced experience. Not a member? Join today
News & Media Grant highlights SC high school drone program

A grant for a Greenville Technical Charter High School drone program is the key to increasing the pilot population, said South Carolina science teacher Doug Adomatis as he accepted $8,299 from American Airlines to champion aviation to youth during a school assembly on January 22.

The 2019 Boeing Pilot and Technician Outlook predicts that the world will need 804,000 new civil aviation pilots and 769,000 new maintenance technicians over the next 20 years.

“If I can get a student into my class, I can make them a pilot,” said Adomatis, who uses the AOPA High School Aviation STEM curriculum to teach science concepts. During a grant application video, he “literally pulled kids out of the lunchroom” to capture their reactions after they experienced the feeling of a discovery flight using first-person view devices and a small drone. When asked if they would consider the school’s aviation program, the students in the video were enthusiastic. Adomatis plans to use the drone equipment for “exploration flights” to recruit middle school students and to set them on an aviation career pathway.

Principal Mary Nell Anthony complimented Adomatis for “teaching science through the lens of aviation” and emphasized that the school board “was very strong in support of this innovative idea.”

The high school is located on the Barton Campus of Greenville Technical College and offers an aviation maintenance apprenticeship program that allows upper class students to earn industry-recognized A&P certification credentials while receiving both high school and college credit. The partnership includes classwork and hands-on exercises for the first year, followed by a year of practical experience at the college level. Students in their second year could be making $25 an hour in a role as an entry-level A&P. An aviation technician career is attractive to local students because of Lockheed Martin’s F–16 Fighting Falcon military jet production line in Greenville County.

Brad Morrison, the manager of pilot career recruiting for American Airlines, told students they “couldn’t make a bad decision regarding aviation right now” because of dwindling pilot supply and increasing travel demand. He said career pilot candidates could expect to earn between $45,000 and $55,000 a year while gaining initial experience in the American Airlines Cadet Academy pipeline. “Literally, at 19 years old, you can teach others how to fly and make $50,000.” He said a regional jet pilot can earn about $60,000 a year—climbing to $100,000 to $110,000 over the next five years. “The numbers are astronomical by the time you are flying for a major air carrier,” Morrison noted.

Jane Dyer, a retired Federal Express captain, participated in a panel discussion. She said she experienced an early flight in a Cessna T–37 twin jet trainer, “and oh my gosh, it was the most fantastic thing ever.” Dyer was frank with the students and explained that in the late 1980s she faced gender discrimination as a young pilot but persevered. “Women can do anything and everything,” Dyer reiterated. “There’s no profession made for a certain gender, but is it going to be easy?” she asked them. “No. It takes a lot of soul-searching and training.” However, Dyer said the rewards of an aviation career “are phenomenal.”

American Airlines Cadet Ashton Lozzi began her aviation profession as a flight attendant but decided a career change was in order. The 25-year-old said, “Flying is even more fun when you’re at the controls,” and has her sights set on piloting a Boeing 777 Dreamliner. She said her male colleagues were “completely supportive,” but admitted the training was demanding and has eliminated much of her social life. “It’s the hardest thing—but you know when you can do something—so don’t talk yourself out of it,” she advised them.

Adomatis complimented the AOPA aviation science curriculum that led to the grant because he said it will ultimately lead to more students in the high school’s aviation program. “Without that, we would’ve really struggled, but the curriculum was written by teachers—and for teachers—so I knew I could deliver. We’re part of the pipeline, and I can teach these kids a lot of science by teaching them about aircraft,” he said.

The You Can Fly program and the AOPA Air Safety Institute are funded by charitable donations to the AOPA Foundation, a 501(c)(3) organization. To be a part of the solution, visit www.aopafoundation.org/donate. 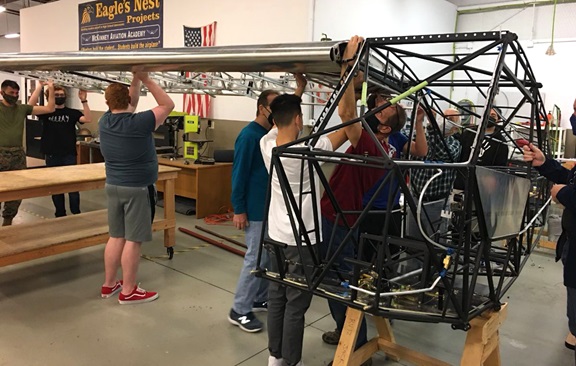