Get the app Get the app
Get the latest news on coronavirus impacts on general aviation, including what AOPA is doing to protect GA, event cancellations, advice for pilots to protect themselves, and more. Read More
Already a member? Please login below for an enhanced experience. Not a member? Join today
News & Videos Avionics: Dynon HDX upgrade

In the language of avionics,  terms like “plug and play” or “drop-in replacement” can be bitterly ironic. The reality of installing new glass displays is seldom as simple as it sounds. There’s almost always rewiring, fitting, and fabrication to be done—and those skilled tasks aren’t quick or easy. 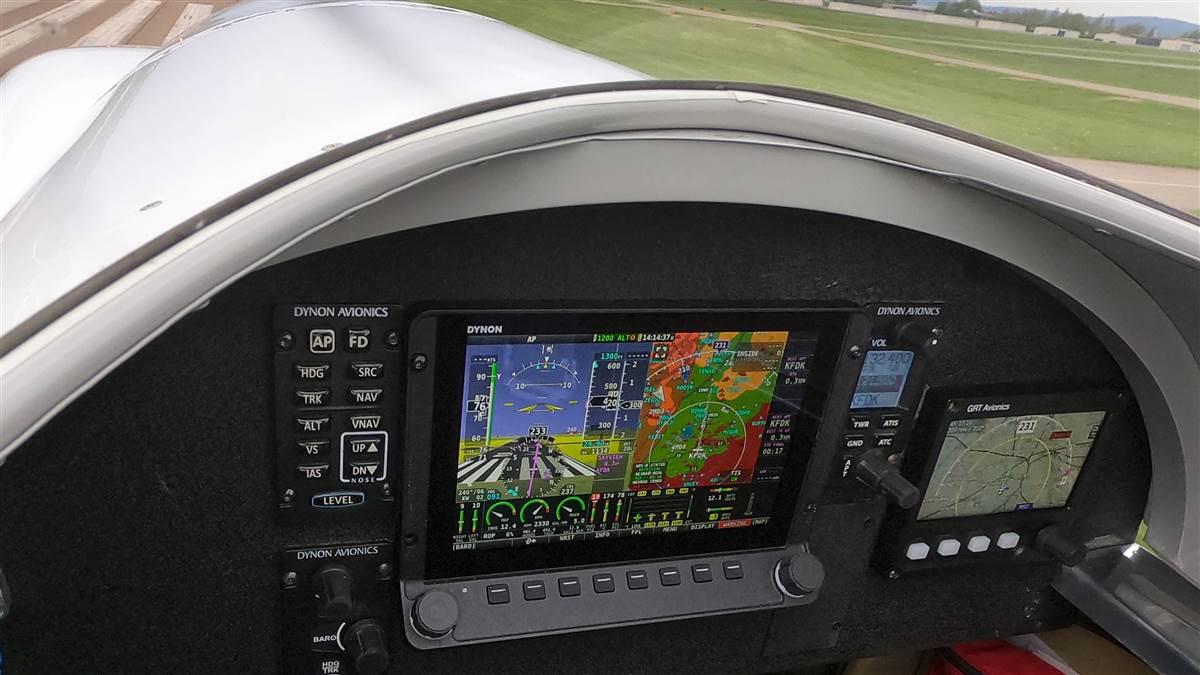 So, when Dynon Avionics claimed replacing my dated-but-functional SkyView primary flight display with a newer, better HDX version was a straightforward matter, I was deeply skeptical. As was Carlo Cilliers, AOPA’s resident aviation mechanic with inspection authorization, who has installed two Dynon SkyViews in his own airplane.

“Remember our last plug-and-play instrument panel required completely rewiring the entire airplane,” he said. “Are you sure you want to open that can of worms?”

Well, I really didn’t have a choice.

The 7-inch Dynon SkyView screen in my Van’s RV–4 is simply too cluttered to show flight instruments with synthetic vision, an engine monitor, and moving map at the same time. Even though the replacement HDX is the same physical size, its sharper screen resolution and layout (borrowed from experimental subsidiary Advanced Flight Systems) provides a larger, clearer picture.

He flipped on the airplane’s master and avionics switches, and the HDX came to life. Even with a protective film over the screen, it was a noticeable improvement.The HDX retails for $3,190 and I expected to recoup nearly half that cost by selling my old SkyView online. (Dynon doesn’t offer an HDX trade-in program.)

With the new HDX wrapped up in a box, I met Cilliers at the hangar. We took out the SkyView in about 10 minutes—and all it took was removing four screws and disconnecting a single 37-pin, D-sub connector.

Then Cilliers unboxed the HDX and clicked it into place. Two of the four screw holes lined up, and two didn’t. Those that didn’t required a couple of new nut plates. Then Cilliers reconnected the electrical connector on the back of the unit by feel.

He flipped on the airplane’s master and avionics switches, and the HDX came to life. Even with a protective film over the screen, it was a noticeable improvement.

We transferred the previous SkyView settings to the HDX via a thumb drive and installed new firmware and navigation data. But, for some reason, the new unit wasn’t communicating with the Dynon transponder, autopilot, GPS, or ADS-B system. Cilliers did some clever detective work to unlock the HDX serial ports—and that got all the components talking again.

Then it was time to recalibrate the magnetometer (for heading information) and the fuel tanks—which meant draining them completely and then refilling them, two gallons at a time. The entire process from removal to fully functional replacement took about four hours, and that’s blazing speed for an avionics upgrade.

Dynon scored a breakthrough four years ago when it became the first avionics firm to win FAA approval for installing non-TSO primary instruments in standard category aircraft. That initial approval for a relatively simple, all-in-one attitude instrument—the D10A—has been followed with similar approvals for much of Dynon’s product line. Dynon even started a separate division for standard category aircraft products that it calls Dynon Certified. The HDX system is its flagship, and it’s been FAA approved for installation in about 600 piston airplane models.

“Remember our last plug-and-play instrument panel required completely rewiring the entire airplane,” he said. “Are you sure you want to open that can of worms?”Dynon also builds an integrated digital autopilot that, so far, only has been approved for a few standard category aircraft. When Dynon gets the FAA’s blessing to offer fully integrated avionics suites—including autopilots—for certified aircraft, it’s sure to be an even more formidable competitor to industry leader Garmin than it is now.

Garmin has an unmatched lineup of both certified and non-TSO products, industry-leading engineering depth, and an almost supernatural ability to get FAA approval for new avionics across a broad spectrum of aircraft models. Garmin’s G3X PFD/MFD—which was originally made for experimental aircraft and is now approved for hundreds of FAA-certified models—is an exquisite piece of technology that shares information seamlessly with the G5 standby instrument, Garmin GPS systems, and radios—and wireless devices via FlightStream. The G3X and its supporting cast are being widely adopted for both new aircraft and legacy panel upgrades.

Dynon has long been a leader in experimental and light sport aircraft, and its products have a well-deserved reputation for being economical, and easy and enjoyable to use. Dynon also provides navigation and obstacle database updates to customers free of charge, a contrast to competing firms that charge subscription fees that, over time, can significantly increase the cost of their products.

For Dynon, however, every installation in an FAA-certified airplane brings a new customer. And if Dynon’s history in light sport and experimental aviation is any indication, it will be a scrappy competitor with staying power in the certified market.