Get the app Get the app
We will be performing maintenance on our systems Sunday, 8/21, beginning at 12:00 A.M. ET and ending at 6:00 A.M. ET. During this time, you may experience intermittent service outages. We appreciate your patience.
News & Media FAA contacting private airport owners to update data

Almost 3,000 privately owned airports could be listed as “closed” in the FAA’s online database and be removed from aeronautical charts if owners don’t verify their airport records by June 30. 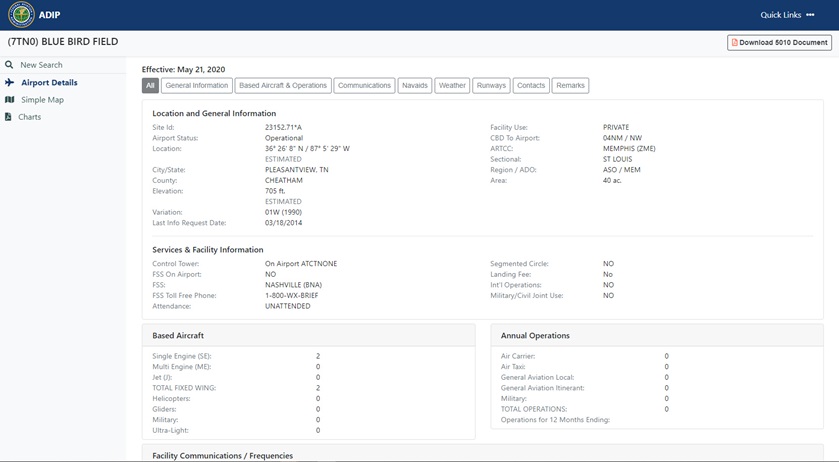 How to update private airport information

Owners of private airports are being asked to update the airport information in the FAA database that predates January 2018. AOPA details four methods to choose from to bring airport data up to date.

If the FAA does not receive periodic updates about private airports from owners, charts may reflect incorrect airport information, or in some cases show private airports that no longer exist.

If the owner of a private airport has not verified the information since January 2018, the airport could be listed as “closed indefinitely” in the FAA’s airport database starting in July and would be removed from charts during the next charting cycle. If airport information on file has been provided to the FAA since January 1, 2018, no action is required.

Owners can view the date of the data that the FAA has on file by searching for their airport, and looking at the date next to “Last Info Request Date.”

“This applies to airports that the FAA is aware of because the owner has previously notified the FAA that the airport exists, and has provided critical information such as runway dimensions,” said Adam Williams, AOPA manager of airport policy. “A common example would be if an airport is for private use only, but the owner still wants the airport to appear on aeronautical charts.”

The FAA will restore an airport to aeronautical charts once the owner notifies the agency that the information in the database is correct. More than 2,900 airport owners have not provided new data since January 2018, he said.

AOPA encourages owners to respond to a data verification request they may have received in the mail from the FAA. They can also respond via the Airport Data and Information Portal or by contacting their local FAA regional airports office.

AOPA will send emails to several hundred private airport owners who are AOPA members to promote responses, and other aviation organizations are also urging their members to participate, Williams said.