Get the app Get the app
Get the latest news on coronavirus impacts on general aviation, including what AOPA is doing to protect GA, event cancellations, advice for pilots to protect themselves, and more. Read More
Already a member? Please login below for an enhanced experience. Not a member? Join today
News & Videos TV helicopter crew rescues lost rafter

KFOR-TV helicopter pilot Mason Dunn and Managing Editor/Photojournalist Steve Johnson rushed to the North Canadian River near Oklahoma City to document the search for a lost rafter but couldn’t predict they’d be the rescuers. Dunn landed the chopper on a sandy beach and Johnson pulled the exhausted amputee out of the water, ending a harrowing 20-hour ordeal on June 4.

“It was everything I had left in me,” David Stokes told his rescuers after they located him struggling to remain afloat. The misadventure began after his raft failed when he drifted away from a group of kayaking friends. The friends notified authorities and initiated their own search until darkness rolled in.

Dunn and Johnson got the call while they were hovering in the television station’s Bell 206L LongRanger over an FBI raid and broke off to help document the search. Law enforcement personnel had already launched drones, four-wheelers, and airboats, so the search was big news, Johnson told AOPA.

When they spotted him, Stokes was clinging to a branch with the water rushing around him, and he’d already been in the river for 20 hours.

Once Dunn maneuvered the LongRanger to a more favorable landing zone, Johnson made a dash for Stokes and “dragged him up to the shoreline.”

“That branch I grabbed a hold of, it broke. That was it. That was it,” Stokes told the news crew as he rested near the helicopter’s skids with a medical evacuation crew on the way. “Without your helicopter, knowing that you guys were landing … that was everything I had left in me, to get to the bank.” The exhausted swimmer said his arms were “on fire” when Johnson plucked him from the swift-moving current. 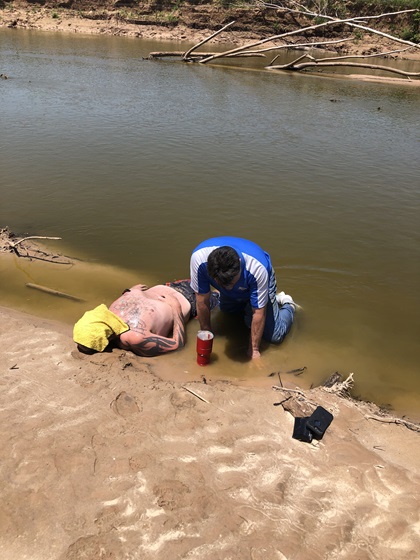 Dunn made the risky decision to land on the sand bank after a previous landing spot didn’t have access to the river. After touching down, “Superman Steve got out and yanked him out of the water, and the rest is history,” he said.

In 2010 the longtime Oklahoma TV news station pilot used rotor wash from a different Bell helicopter to push a stranded calf from the middle of a frozen pond to the shore. A waiting resident proclaimed the December 27 save a “wonderful” Christmas gift.

Dunn discovered the ice-sliding maneuver by accident in 2007 when he flew close to a baby deer to get a visual angle on the critter. The ensuing windstorm generated by the rotor blades lifted—and then pushed—the fawn from icy Lake Thunderbird near Norman. Dunn was presented an award for the save from an animal rights group.

“I love the LongRanger,” he said. “It’s perfect for what we do. I flew a [Bell] 407 for a TV station and loved it but they’re so expensive.”

On the day of the rescue, the Bell 206L had about a 1.5-hour endurance because of the temperature and the weight of the news gathering equipment bolted onto the helicopter. It was a scorcher when Stokes went missing and the conditions caused the crew to fly and work efficiently. “On a cold day we can stay up a good 2.5 hours,” he said.

Johnson said when Stokes came into view, he  swung “the camera forward and just followed the curves of the river. There were a lot of bends, and I trained the camera on him just to see what was going on.” That’s when Johnson realized “something wasn’t right” about the situation. “The last thing on my mind was getting a good shot. My first concern was checking on him to see if he was OK. The camera work comes secondary.”

Johnson said the station flies frequently for weather stories, “and this is a pretty big news market, so we fly as much as possible.” Looking back on the river rescue two days after saving Stokes’ life, Johnson and Dunn both said they were glad they could help. “If we hadn’t landed, and if that branch had given away, he was pretty much done,” confided Johnson. 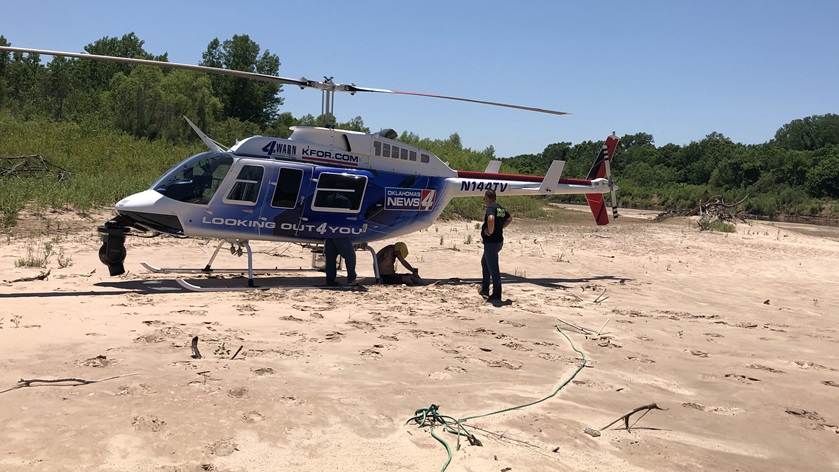