Dimitri Neonakis is using his airplane as an artist’s brush to create images that are close to his heart. A recent flight traced a clenched fist, protesting racism and injustice following the killing of George Floyd in Minnesota—but the Canadian Cirrus SR22 pilot has also recently honored a slain police officer, the class of 2020 graduates, a fallen Snowbirds captain, and his family.

“It started with the events down in Minnesota,” Neonakis said. “Millions of people protested, showed their support and their defiance, against racism—and I did the same thing—but I protested through the air.”

The GPS track of his 330-nautical-mile-long flight forms a fist that is a “symbol of solidarity and a symbol of defiance against repression. It does represent the Black Lives Matter movement,” he explained. “I decided to draw that to express my solidarity and my support [and] to speak out against oppression and racism.”

The left-handed raised fist flight path began as a paper drawing and was transferred to the ForeFlight app using “hundreds of waypoints” for the art’s intricacies. He explained that all flights begin and end with a 50-mile straight line from the general aviation side of Halifax Stanfield International Airport in Nova Scotia.

Neonakis then flies the path traced on the electronic flight bag app, being careful to link directional changes together for the integrity of the art project, while keeping an eye on the aircraft’s ground position, speed, and endurance. Tight turns are tough, he confided. “All it is, is a complicated flight path and very twisted,” he said. 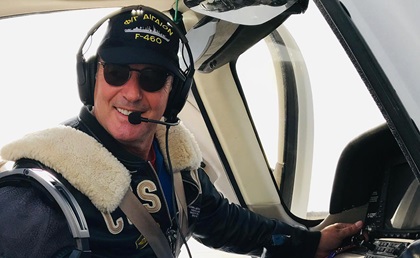 He’s created additional flight path art to recognize other significant events, and built a social media following that sometimes creates conversation before he touches down. During another recent flight, fellow pilots, friends, and relatives had already begun to ping his cell phone with compliments about the latest aerial work of art before Neonakis had shut down his engine.

“I like to fly a lot either for work, for pleasure, or to give free flights for children with disabilities. Now, with COVID-19, all those flights are gone, so there’s nowhere to go, really. I like being up in the air and I’d rather go out and do a drawing than just fly around,” Neonakis explained. “I find it very relaxing … but some of these drawings are personal.”

On Mother’s Day, he honored his daughter Ereni, who is expecting her first child in July. The 281-nautical-mile-long mother-and-child silhouette was also intended “for all the mothers out there, especially those in long-term healthcare facilities dealing with COVID-19 alone,” he posted to social media.

On May 20, his aerial artwork honored the late Snowbirds Capt. Jennifer Casey, who was killed after ejecting from a Canadair CT–114 Tutor jet trainer shortly after takeoff from Kamloops Airport in British Columbia. Casey, a public information officer with the Canadian aerial demonstration team, was flying with pilot Capt. Richard MacDougall, who was injured. She was a family friend and was scheduled to greet children with disabilities during charity flights that Neonakis often performs for the youth. The accident hit him like a gut punch, so he honored Casey with an intricate aerial drawing of Snowbirds jet No. 11—her favorite aircraft—and her nickname “Jenn” linked forever to the flight path.

“Lady H.” is a 357-nm-long peace offering flown May 3 in the shape of a female face that salutes Nova Scotia Royal Canadian Mounted Police Constable Heidi Stevenson, who was killed during a shooting rampage on April 19, but the drawing wasn’t his first contribution to the social justice conversation. 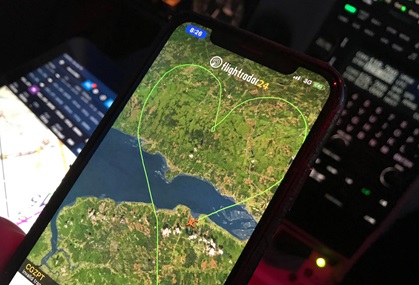 The Nova Scotia rampage April 18 to 19 that killed Stevenson and left nearly two dozen dead sparked Neonakis to a heartfelt action: “We were in the middle of a pandemic, 22 people lost their lives, and there was no good news,” he explained. His solution was to open his heart—and lift other Canadians up with a heart-shaped flight path in the sky. He sketched a quick paper-and-pencil preview and launched before the rampage ended. He didn’t expect anything to come of the cathartic session. “I did it for myself and didn’t expect anyone to see it. I was so shocked at what happened to these 22 people, and I just wanted to go up there and draw a heart. I was simply grieving, and this tragedy had touched me personally because of a friend.”

When he landed, he was tagged by a Halifax airport group, and things “just exploded.” The crude loops of that first attempt drawn in the shootings’ immediate aftermath “brought a lot of comfort” to residents. “With that, it kind of encouraged me to do more drawings, and since I love doing them, I get out and do drawings that have to do with current events,” he said.

An interview with AOPA was scheduled around “The Graduate,” a 317-nm-long aerial drawing June 9 honoring the class of 2020. He explained that the mortarboard-and-tassel flight path recognized students “who didn’t get to throw their cap in the air this year.” Instead, the 2.5-hour flight allowed him to throw the traditional commencement headgear “up there for you,” he wrote on Facebook. 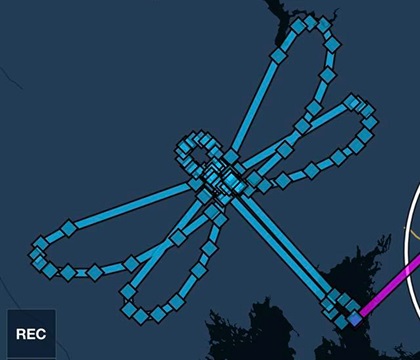 Neonakis began flight lessons in 2000 and earned his Canadian pilot certificate about two years later. A few years ago, he began giving back to the community with a special Facebook page called Dream Wings that is dedicated to giving physically, mentally, and emotionally challenged youth flights in a small aircraft.

A June flight with 11-year-old “Captain Zac” in the right seat helped the young cancer patient temporarily forget his pain as air traffic controllers and airport personnel greeted the youngster on the radio and on the ramp.

The popularity of Neonakis’ aerial artwork has increased to the point that thousands of followers search for his aircraft’s Golf Zulu Papa Tango call sign on FlightRadar and FlightAware apps to seek his next effort. He said he is planning special drawings for the holidays and other occasions going into 2021, but he doesn’t consider himself to be an exceptionally good artist and is “honestly … stunned” that so many people appreciate his efforts.