Get the app Get the app
Get the latest news on coronavirus impacts on general aviation, including what AOPA is doing to protect GA, event cancellations, advice for pilots to protect themselves, and more. Read More
Already a member? Please login below for an enhanced experience. Not a member? Join today
News & Videos Redbird remote learning teaches an old dog a new trick

I had just rolled through a 30-degree-bank right turn, hauled back on the yoke for a climb to the opposite direction, and was feeling pretty good about my initial chandelle in a Redbird FMX flight simulator. 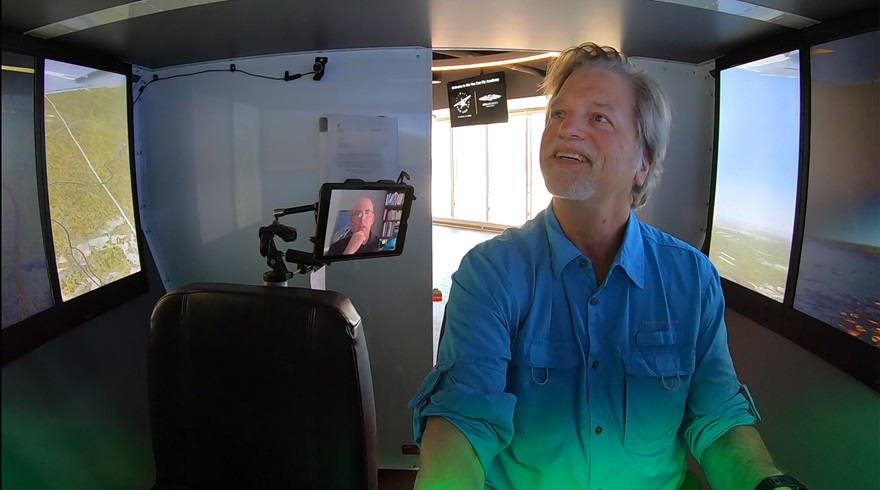 A remote learning lesson involving a Redbird FMX flight simulator, an iPad on a tripod, and an instructor linked by Zoom taught a pilot the chandelle, a maneuver required for the commercial pilot certificate. Photo by David Tulis.

“That looks like a plate of spaghetti,” lamented flight instructor and AOPA Editor at Large Dave Hirschman, snapping me back to reality. “It’s the worst recognizable 180-degree turn I’ve seen.”

“I guess I’ll take some meatballs with that next time,” I muttered while struggling to understand the exercise and scrambling to regain my shattered confidence. “Let’s give it one more shot and see if I can do it,” I said, determined to show him the right stuff.

A hands-on demonstration would’ve really helped me, but it was not meant to be as the world buckled down under social distancing procedures in the throes of the coronavirus pandemic. Although he’s usually by my side, on this flight Hirschman was about five miles away monitoring my performance from home via a Zoom video link while we tested the remote teaching concept.

Other students, instructors, and flight schools grappled with similar restrictions put in place to avoid the exchange of germs in the close confines of a general aviation aircraft.

Redbird Flight Simulations Marketing Vice President Josh Harnagel worked with us to outfit one of AOPA’s two Redbird full-motion simulators with software for the remote learning experiment, so I figured we had the next-best option in lieu of a one-on-one lesson. Harnagel explained that Connect software enables remote access to a web-based version of Redbird’s flight simulator operating system, Redbird Navigator, which gives flight instructors full functionality of the system’s instructor tools. Hirschman’s tools included a split-screen view of the simulated aircraft’s primary flight display and a moving map display of the flight in progress. 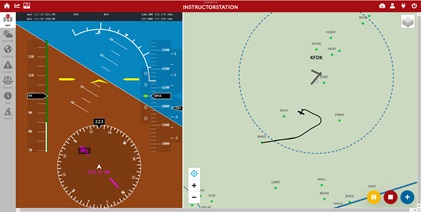 The live feed allowed my instructor to track my progress, critique my hand-flying skills, and analyze additional flight data. Although he wasn’t close enough to physically coach me, I still felt Hirschman staring me down through an iPad clamped to a MyGoFlight universal cradle and a Manfrotto tripod positioned between the simulator’s seat rails.

It was difficult to understand what he meant for me to do when Hirschman instructed me to apply back-pressure until I could feel it, turn at 30 degrees, and simultaneously maintain the Cessna 172’s pitch attitude at about 17 degrees nose-high during a maximum performance, 180-degree climbing right turn. I just couldn’t picture it, despite a preflight briefing and diagrams showing the sequence.

More than once I rolled out of the exercise with the stall horn buzzing an end to the maneuver well short of commercial pilot standards. I could tell Hirschman was also frustrated at being tethered to his computer looking over my shoulder through a lens instead of providing a practical demonstration.

“I like the monkey-see-monkey-do, and I miss the ability to demonstrate,” Hirschman confided, and I agreed. He’s more of a hands-on instructor—and I’m more of a hands-on student—so we both compromised for the sake of new technology. “To me, it’s a real shortcoming as an instructor, and it’s something that I miss. Whether you’re watching me—or you’re watching some automation within Redbird fly it—I’d like to see the student be able to get a demo of the maneuver,” he added.

Redbird Connect was beta tested with flight schools, instructors, and pilots in anticipation of a late-July product release that coincides with the Experimental Aircraft Association’s Spirit of Aviation Week July 21 through 25.

Although EAA AirVenture in Oshkosh, Wisconsin, was canceled due to the coronavirus pandemic, closing the popular Redbird-powered Pilot Proficiency Center that’s held at the show, Redbird Connect will power a Virtual Pilot Proficiency Center. The scenario-based learning opportunities challenge pilots to remain sharp and focused as they attempt to tackle VFR or IFR exercises that might be out of their comfort zone.

Students will be able to download and install Redbird Connect on any Redbird flight simulator that has a version of the Navigator operating system installed. Both the student and instructor will also need a reliable internet connection and access to a third-party videoconferencing application.

As a student, I prefer the feedback I get from watching an expert fly a certain exercise because I try to take in the different pieces of a maneuver as they fall into place—looking out the windscreen, eyeballing the instruments, and paying attention to my instructor’s hand and eye movements help sear the technique into my brain.

“I’m getting hypoxic because we’re gaining so much altitude,” he nagged from the Zoom video link while following my breadcrumb path on his laptop screen. “OK, start on a north heading and let’s go. Give me 30 degrees and PULL.”

I did as I was told, and after four previously unsuccessful tries, I had it almost figured out. I think practicing in quick succession—something you can do more easily in a simulator than in an actual aircraft—really helped. The repetition allowed me to finally get my head wrapped around the multiple tasks that must be mastered.

The lightbulb came on when Hirschman broke the exercise down to its most basic phases and coached me through each one. “Head north and hold 30 degrees. Now we’re halfway through the maneuver, so very slowly, hold that pitch attitude. And very slowly, roll out on a heading of south. Use your rudder pedals to stay straight because you’re climbing at a high power setting,” he reminded me over the video link.

The stall horn chirped just as I rolled out on the opposite heading and I could almost feel Hirschman smiling behind me. “OK, great. You’re within five degrees of our heading … all right, good! I’m looking at the ground track and that was a perfect 180-degree turn,” he complimented. 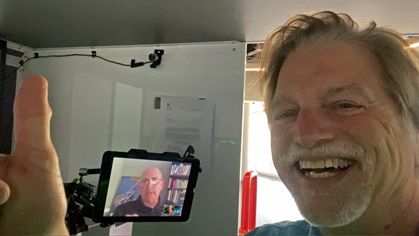 It felt good to me, too. Despite some initial misgivings about the technology of flying without an instructor by my side, the immediate feedback taught me how to apply the correct amount of yoke back-pressure for the pitch angle while splitting my concentration between the tasks at hand. The sight picture from the large TV monitors subbed for the windscreen and windows, and I was also becoming comfortable with feedback from the Garmin G1000 digital panel.

I had one more chandelle up my sweaty sleeves before I left the “practice area,” and it pleased both of us. “That was great, Dave, thanks,” I said as I straightened out west of the airfield, relieved to have an addition to my flying tool belt.

“Nice. That’s the best one yet,” my virtual right-seater praised. “That was really amazing progress from one lesson. Now, how about pulling the mixture and gliding back to Frederick Municipal?” he deadpanned—and another challenge was born.