Get the app Get the app
AOPA Members DO more LEARN more SAVE more - Get MORE out of being a pilot - CLICK HERE
News & Media AOPA to FAA: Leave room for low-risk drone ops

Tracking drones will make the airspace safer, but the FAA does not need to sacrifice the freedom to fly in the interest of public safety when both can be achieved simultaneously, AOPA said in formal comments responding to a notice of proposed rulemaking that has drawn a huge response. 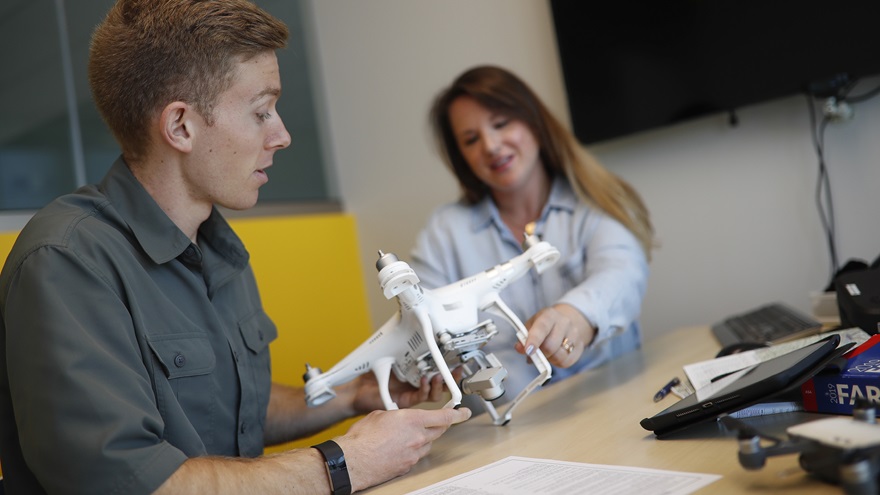 AOPA has integrated unmanned aircraft systems as an elective module within the popular (and FAA-approved) Flight Instructor Refresher Course. Photo by Chris Rose.

More than 30,000 comments were submitted before the March 2 deadline to opine on the FAA’s proposed rules written to ensure that virtually all unmanned aircraft can be tracked and identified. AOPA has long supported safe integration of drones into the National Airspace System, and has worked for years with fellow stakeholders to safely advance the technology. AOPA has been called on to advise the FAA on a range of issues, including remote identification (RID) of drones.

“Since 1939, AOPA’s mission has been to protect the freedom to fly while keeping aviation safe, fun and affordable,” AOPA Director of Regulatory Affairs Chris Cooper wrote in AOPA’s formal comments submitted March 2. “While AOPA’s mission has traditionally served the interests of manned general aviation owners and operators, with the rapid growth and interest in UAS, we realize the importance of supporting the development and safe integration of the UAS industry. Integration of unmanned aircraft will enable humanitarian, public safety, and commercial applications of this technology. This will, in turn, create many future career opportunities for the next generation of pilots and other aviation professionals who are inspired by flight early in their lives. Whether manned or unmanned, our mission remains the same: to advocate for policies and rules that grow and protect the freedom to fly.”

AOPA strongly supports the concept of RID, Cooper continued. However, the world’s largest aviation membership association (whose members collectively own, lease, and operate more than 85 percent of all GA aircraft in the United States, with tens of thousands of drone pilots among our ranks) made specific recommendations to eliminate unnecessary costs and burdens that would sacrifice individual freedoms without enhancing safety or security.

For example, the proposed creation of FAA-Recognized Identification Areas (FRIA) where aircraft not equipped to participate in RID would be required to fly imposes needlessly short deadlines and durations. AOPA called on the FAA to remove the 12-calendar-month deadline to request a FRIA, and instead allow applicants to request FRIA designations on an ongoing basis, and with a much longer duration than the FAA proposed.

“Requiring the individual registration of low-risk and low-cost model aircraft that are required to operate within line-of-sight (many which will presumably operate within a FRIA under the proposed rule), does not increase public safety or security,” Cooper wrote on behalf of AOPA. “The current registration requirement has been in effect since 2015, and AOPA is not aware of any known safety or security issues that would have been prevented as a result of having individual UA registration information. This proposed rule will result in a significant financial burden to thousands of UAS owners and would be a detriment to the growth of the future pilot community.”

AOPA also objected to imposing the cost and limitations associated with requiring aircraft flown within visual line of sight (VLOS) to connect to the internet in order to participate in RID.

“While an internet connection may be necessary for operations where a UA is flying well beyond distances that can be reached with a broadcast signal, a UA performing non-complex, lower-risk operations within line-of-sight should not be required to be connected to the internet from takeoff to landing. To require an added cost and operational requirement for low-cost, low-risk VLOS UAS operations is unnecessary for several reasons.”

Among the reasons cited are limits on cellular connectivity in rural areas, the costs associated with those connections, the fact that regulators in Europe have proposed a broadcast-only version of RID, and the fact that the RID advisory committee also recommended a broadcast-only requirement for RID participants. There is also the question of compliance, and creating regulations that can be counterproductive.

“Creating a requirement in areas where it would be nearly impossible to comply would push individuals to operate in non-compliant ways and could prevent the opportunity to open the world of flight to someone who otherwise would not have had that opportunity. Broadcast alone would be enough for VLOS operations as [law enforcement] can still obtain the message elements to determine the identity and location of the operator,” AOPA wrote.

On this last point, AOPA also made clear that access to the pilot’s location and identity should not be available to the general public. That information should only be available to law enforcement and the FAA.

“AOPA fully supports the need for the FAA and [law enforcement] to identify those who operate UAS in careless, reckless and nefarious ways. However, the need for the public to know an operator’s exact location is unnecessary and can lead to operational safety issues and physical confrontations between a remote pilot and the public. If an individual of the public is concerned about the operation of a UAS—whether a security or privacy concern—the proper authorities should be notified immediately. From there, the appropriate entity can identify the UAS through a RID broadcast transmission (whether it is operating BVLOS or VLOS) and can then determine the location and identity of the operator. Those who are not RID equipped would presumably be located within an approved FRIA.”

The FAA will review the thousands of comments submitted and may or may not make changes to the proposed rules before publishing a final rule on remote identification. Cooper said that there is no deadline or announced timeline for that, but AOPA hopes the FAA can make this a priority to continue the safe integration of UAS with manned aircraft and to further support the growth of the industry.