Get the app Get the app
AOPA will be closed July 4th, in observance of the Independence Day holiday. We will reopen at 8:30 am ET on Tuesday, July 5.
News & Media AOPA Q&A with US Rep. Sam Graves

AOPA’s government affairs team had the chance to catch up with Rep. Sam Graves (R-Mo.), a longtime general aviation pilot, advocate, and AOPA member, about his aviation background and GA issues that he is working on in Congress. 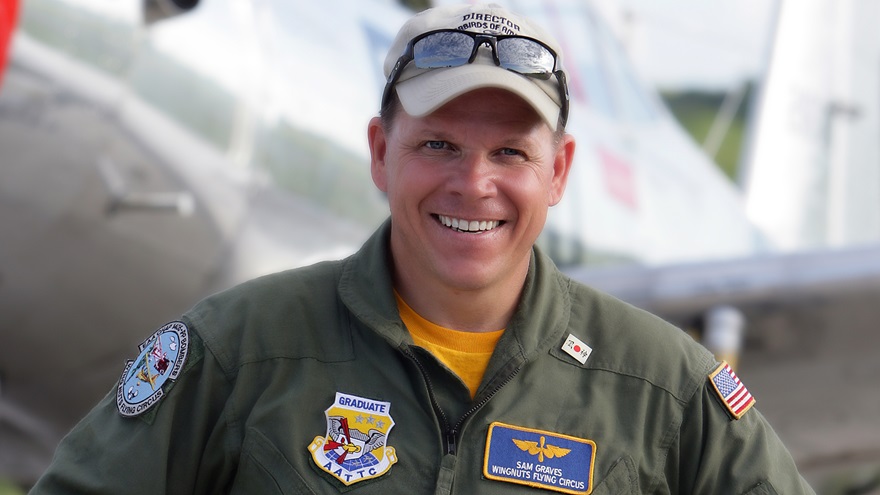 You’ve flown a lot of different airplanes over the years, but which is your favorite?

You have established yourself as an effective leader and key advocate for transportation and certainly for general aviation while in Congress. You serve as the top Republican on the powerful House Transportation and Infrastructure Committee. Please tell us a little about yourself, your career, and your passion for flying.

I grew up on my family’s farm in Tarkio, Missouri, and I’ve always been fascinated by different forms of transportation. I was really fortunate that the airfield sits in the middle of our farm—Gould Peterson [Municipal]   Airport. In fact, Gould Peterson was my uncle, a B–24 pilot killed in World War II, and the airport itself was built on the family’s farmland.

Growing up, my brother and I would pump gas, wash planes, or do whatever work we could find around the airfield, and we were always mooching a ride in one of the airplanes. That’s what started me on my way to becoming a professional pilot with an ATP [certificate].

In addition to being a sixth-generation family farmer and a small businessman back in Tarkio, I’ve served in the Missouri State House and State Senate. I was first elected to the U.S. Congress in 2000, where I now serve as the top Republican on the Transportation and Infrastructure Committee. Considering my lifelong interest in transportation and long-held belief in its importance to our history, economy, and American way of life, it’s really a perfect fit for me and the district I represent in Congress.

So, in my current position on the Transportation and Infrastructure Committee, one of my ongoing priorities is looking for ways to encourage, in every way possible, other young people’s interest in becoming aviation enthusiasts. We desperately need to ensure a strong workforce for the future of U.S. aviation.

Speaking of workforce issues, including a pilot shortage, you were helpful in establishing a couple grant programs in the last FAA reauthorization bill intended to assist organizations like AOPA in continuing to develop high school STEM-based aviation curriculum. Please tell us about these programs and how important they are.

Workforce shortages are a concern across the aviation industry and just about every career path within it, including engineers, technicians, mechanics, and pilots.

We recognized this problem and included an entire Aviation Workforce title in the 2018 FAA reauthorization act.

On February 11 this year, the Aviation Subcommittee held a hearing to explore workforce issues, including barriers to entry and retention, and ways to address those barriers. When asked about the grant programs in the FAA reauthorization act at that hearing, the FAA indicated they’ll be seeking applications later this year.

These programs enjoy broad, bipartisan support in Congress. We all know that we have to do more to get young people interested in aviation, especially people from under-represented populations, as early as possible. I’m proud of these grant provisions, and I’m looking forward to seeing how they help AOPA and others to develop interesting, dynamic, and challenging aviation curricula.

There are many industry efforts to help address the aviation workforce shortage, whether it be mechanics, technicians, or pilots, but it doesn’t appear to be synchronized. Is there something Congress can do to help bring together the entire aviation industry, including military aviation, to address things like workforce development, training practices, apprenticeships, aviation curriculum development, and other matters that would help leverage knowledge, and create efficiencies and effectiveness in a coordinated way?

Congress has definitely taken notice of the workforce shortage issues, and I want to be sure we’re doing our part to support how the industry is trying to tackle the problem.

The Aviation Workforce title in the 2018 FAA reauthorization act was an important first step. In addition, several new bills have been introduced in this Congress that address aviation and aerospace workforce shortages. The recent Aviation Subcommittee hearing I just mentioned, which drew considerable member interest, shows that Congress is still engaged on these issues. I absolutely support more efforts to ensure a steady, more reliable pipeline of qualified and diverse aviation professionals.

As we continue to work on this problem, we need to remember that the FAA’s primary focus is on safety, and we need to make sure it’s not pulled in too many directions.

The good thing about GA and aviation issues in Congress is that there is strong bipartisan support for a healthy, vibrant industry in general. Members of Congress often form caucuses to support issues or causes of particular interest, and the GA Caucus in Congress is one of the largest of these groups. We work together, Republicans and Democrats, to identify ways to address GA issues.

That is also how I prefer to work on the Transportation and Infrastructure Committee—in a bipartisan manner—because the simple reality is that’s how to get things done in Washington that are going to help aviation in America thrive.

You are a key supporter to help make certain our airport ecosystem remains strong and vibrant, especially for many towns and communities in rural America. What can we do to help ensure these airports are adequately funded, especially as hangar development is concerned?

The way we ensure stable airport funding is to find ways to get more people interested and invested in GA. Traditional pathways like aircraft modeling and Civil Air Patrol remain important pipelines for young people to discover aviation, and hopefully fall in love with it the way I did.

But we have to do more and find new strategies for new generations, and that includes leveraging the growing interest in new technologies like drones, electric aircraft, and commercial spaceflight.

Of course, we have to maintain a strong airport ecosystem so that people who do become interested in aviation have a place to go.

As far as dollars and cents, I’ve introduced legislation to increase funding for needed projects at airports across the country. These funds are derived from the users of our aviation system and not general taxpayer dollars. I also just introduced a new bill to allow airport operators to use some of this funding to offer incentives for the early completion of airport improvement construction projects.

When time is money, getting projects done sooner rather than later is good news for everyone.

You lead a general aviation town hall as part of the Wingnuts Flying Circus fly-in every other year in your hometown of Tarkio. Tell us about that, what makes it so special and so well attended.

It’s special to me for a lot of reasons, and one of them is that it’s held at Gould Peterson [Municipal] Airport, which sits in the middle of my family’s farmland where I grew up.

But it’s really a great show—we call it the Greatest Little Airshow. One major part of that weekend in Tarkio is our general aviation town hall, where we regularly bring together a who’s-who of the country’s aviation leaders and Washington policymakers to talk to the GA community about the issues on their minds. Last year we brought out Transportation Committee leaders, the head of the FAA, all of the association presidents and CEOs—including AOPA—and others.

It’s a regular event that I’m proud to fly in and be a part of.

You mentioned earlier the General Aviation Caucus of which you are the co-chair. It is one of the largest caucuses in Congress. Can you give us a little insight?

Not every congressional district has a large airport in it, but most members of Congress have at least one GA airport in their districts. Especially for rural districts like mine, those GA airports help connect us to other communities and boost our local economies. I think that’s why the GA Caucus is always one of the largest in Congress, and it’s why I continue to co-chair it. And it gives organizations like AOPA and other GA groups opportunities to educate members of Congress on issues important to pilots. I think it’s been extremely helpful and effective.

A few examples of GA Caucus legislative initiatives that became law are the Pilot’s Bill of Rights from 2012, small aircraft certification reform in 2013, and third class medical reform in 2016. In addition, the large FAA law of 2018 addressed a number of issues that were first raised by our members. Those issues included reforms to hangar use policy and treatment of the aircraft registry office during a government shutdown.

We’ll continue to address issues that are important to pilots and work hard to maintain our track record.