A strong cold front pushed through the Southeast on March 28, spawning a tornado that destroyed homes and businesses in Jonesboro, Arkansas, and landed “a direct hit” on Jonesboro Municipal Airport, damaging hangars and dozens of aircraft. 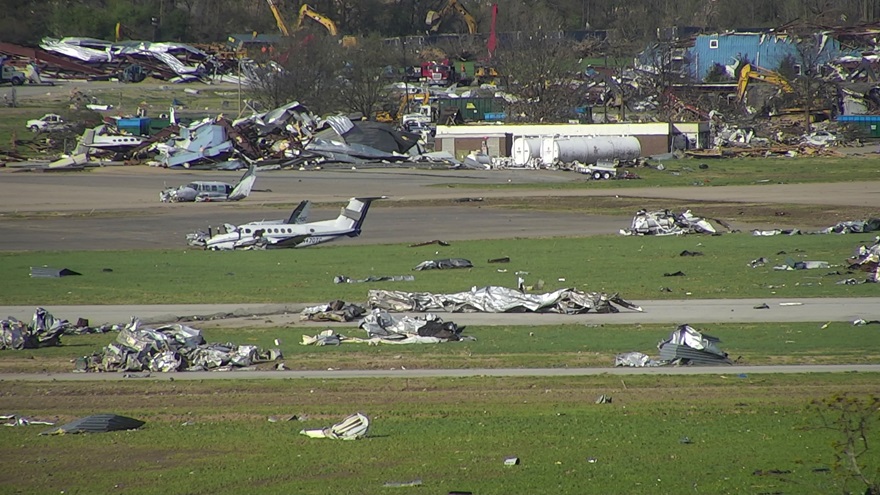 No one was killed in Jonesboro, but 22 people were reported injured when the tornado, estimated at EF3 on the Enhanced Fujita scale with winds of more than 140 miles per hour, struck in the late afternoon.

“It’s been a rough few days,” said Buddy Caubble of Fly Jonesboro, whose maintenance hangar was destroyed when the tornado touched down at about 5 p.m.  He estimated that more than 50 aircraft were damaged on the airport.

“It was a direct hit on the airport, and it hit the mall in town,” he said, adding that it was “fortunate that most people were home and nobody got killed”—a situation he attributed to precautions people were taking during the coronavirus pandemic.

Strong storms continued in the Southeast through March 31, when a tornado that touched down in Troy, Alabama, ripped the roof from a barn near Troy Municipal Airport and scattered debris on the runway, briefly delaying operations, according to an employee of the FBO, Pike Aviation.

Drone footage taken March 29 in Jonesboro showed airplanes crumpled and strewn about the airport—including a Beech King Air 200 that had been blown from the ramp area out toward the runway.

Russell Bradshaw, executive director of the emergency response nonprofit group StormPoint, said he flew the tornado’s damage path on March 29 with a drone, capturing imagery for the Jonesboro Police Department.

Bradshaw estimated that more than 100 residential structures in Jonesboro, a city of approximately 76,000 people, had been destroyed. Jonesboro is about 280 miles west of Nashville, Tennessee, where StormPoint is based, and where cleanup continued at John C. Tune Airport after the field was leveled by a strong tornado on March 3.

Bradshaw also noted the impact of the viral pandemic on the emergency response to the tornado, with emergency briefings being held outdoors and participants attempting to follow guidelines to remain six feet apart from others to avoid spreading the infection.

“It’s hard to remember the six feet when you are more worried about people who have lost their homes, or are injured,” he said.

Dan Namowitz has been writing for AOPA in a variety of capacities since 1991. He has been a flight instructor since 1990 and is a 35-year AOPA member.
Go to Dan Namowitz's Profile
Topics: Airport, U.S. Travel, Training and Safety