Get the app Get the app
Already a member? Please login below for an enhanced experience. Not a member? Join today
News & Media Destination Hawaii: Somewhere over the rainbow

Destination Hawaii: Somewhere over the rainbow

The wonderful world of flying Hawaii

Pinch me. We are flying over lush canyons, pounding surf, and dramatic cliffs as Hawaiian native Israel Kamakawiwo’ole’s iconic medley of Somewhere Over the Rainbow/What a Wonderful World softly plays through the Bluetooth in Laurence Balter’s Cirrus SR22. 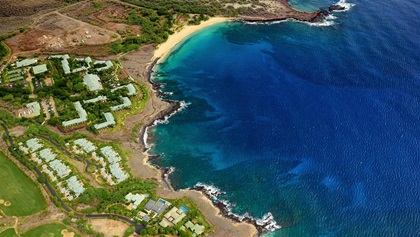 There are 425 rooms here ranging from a garden suite with a peek at the ocean from your own outdoor lanai (think porch) to a three-bedroom suite large enough to entertain your family with oceanfront views. In fact, while there are adults-only pools and lots of privacy options for a honeymooning couple (or a second-chance couple), the resort is very family friendly. But it blends well. Quiet is its middle name. There are several restaurants, the most famous being a Nobu Japanese location and One Forty has three Michelin stars. We especially liked the beach grill by the pools and if you’re truly into indulgence, simply park at the pool and wait for the exceptional service. It was my first time at a Four Seasons resort, and I’m kinda wanting those exceptional sheets on the wonderfully comfortable beds.—JSW 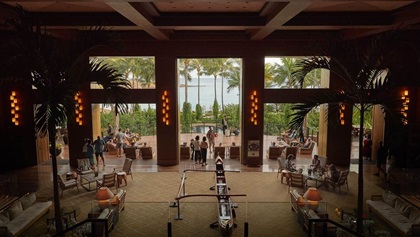 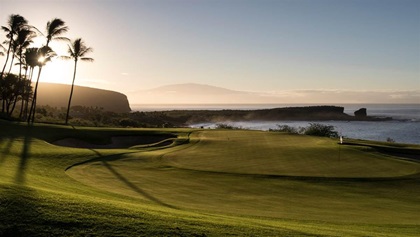 Balter turns his magic carpet sharply to the right on approach to Lanai, the smallest publicly accessible island in the Hawaiian archipelago of 137 islands. Using his angle of attack indicator and balancing on “the blue doughnut,” Balter makes the 5,000-foot runway in a perfect greaser—curiously flying from the right seat. Because AOPA Senior Photographer Mike Fizer is recording all this amazing scenery and accurate, on-point landing, he does not take advantage of his position in the left seat to land the airplane himself—although he could have. The beauty of Balter’s Cirrus and his expertise is that you, too, could fly left seat and pilot the Hawaiian Islands. Bucket list? Check!

Say “Hawaii” to just about anyone, and they will sigh with envy. It’s America’s mysterious island paradise, the fiftieth state, and the only one made up entirely of islands. It’s so far out in the Pacific Ocean that it’s a 2,100-mile, five-hour airline flight from the coast of California. Obviously unless you have a long-range jet, you’re probably not whisking your own magic carpet across the ocean. So how can you see the bird’s-eye view of this beautiful spot from what you’ve come to know flying your own small GA aircraft? Call Laurence Balter of Maui Flight Academy. A former Grand Canyon tour operator, Balter came to Maui 20 years ago and set up his operation. He has been a Cirrus instructor since 2004.

Although Balter will fly the entire island chain, and he’s got lots of experience and expertise with the amazing sites Hawaii has to offer—volcanoes, waterfalls, beaches, canyons, and cliffs, oh my!—he has a special affinity for Lanai. Also known as the “Pineapple Isle,” Lanai is just 140 square miles and is shaped like a fat apostrophe. Landing at 1,300 feet msl (the island’s highest point is 3,300 feet), I exclaim as we exit the Cirrus, “I’m king of the world!” in my best Leonardo DiCaprio imitation.

Truly—because you are surrounded by nothing but blue ocean—it feels like a mountaintop. Vegetation is mostly scrub pines, so no trees obstruct the view up here. A Mokulele Airlines flight has landed before us and tourists less fortunate than Fizer and I are deplaning. Local residents are also coming in from visits to neighboring Maui and the other islands. Mokulele Airlines is a commuter airline founded in 1994 by native Hawaiian Rebecca “Kawehi” Inaba and now serves more island cities than any other carrier.

We are escorted across the ramp to our ride down the mountain. Driven by native Garrett Yoshikawa, we twist and turn down the road lined with Cook Island pines listening to Yoshikawa tell us stories of the area. His first job was the same as any young person living in Lanai in the early 1980s—on the pineapple plantation. Lanai was owned by Dole Food Company from 1922 until 1985 and was the world’s largest pineapple plantation. David Murdock purchased the island from Dole and the final pineapple harvest was in 1992. “My grandfather, my father, worked the pineapples. My first job was on the pineapples. I’m glad I’m not working the pineapples,” Yoshikawa says, as he expertly navigates the guardrail-less switchback turns. I keep my eyes trained on the resort at the base of the mountain.

“How’re you doing?” Fizer asks me, knowing my dislike of driving in general and mountain driving in particular. I find weird comfort knowing that while the mountains of Hawaii are the highest in the world, only a portion stick up above sea level. The rest of their height is below the ocean (the tallest, Mount Mauna Kea on the island of Hawaii, is 4,000 feet taller than Mount Everest but most of its 33,000 feet is submerged). The Lanai Airport is on the southwest side of the island. We travel across to Lanai City and then down the mountain to the south.

Oracle CEO Larry Ellison bought Lanai (97 percent of it, anyway; the airport is county-owned and there are some private residences) in 2012 and established Four Seasons Resort Lanai at Manele Bay. For the seven-month shutdown of Murdock’s resort leading up to the opening of the Four Seasons, Ellison reportedly spent $450 million, which included paying the staff—most of whom are among the island’s 3,000 year-round residents—for the entire time period. He also improved the infrastructure on the island and in Lanai City (the only town), going as far as upgrading the town’s movie theater into a state-of-the-art facility. Lanai residents like Ellison.

Although a second Ellison Four Seasons has opened on the island—Four Seasons Lanai at Koele—we are invited to stay in Manele Bay. It’s a tough job but, well, you know the rest. 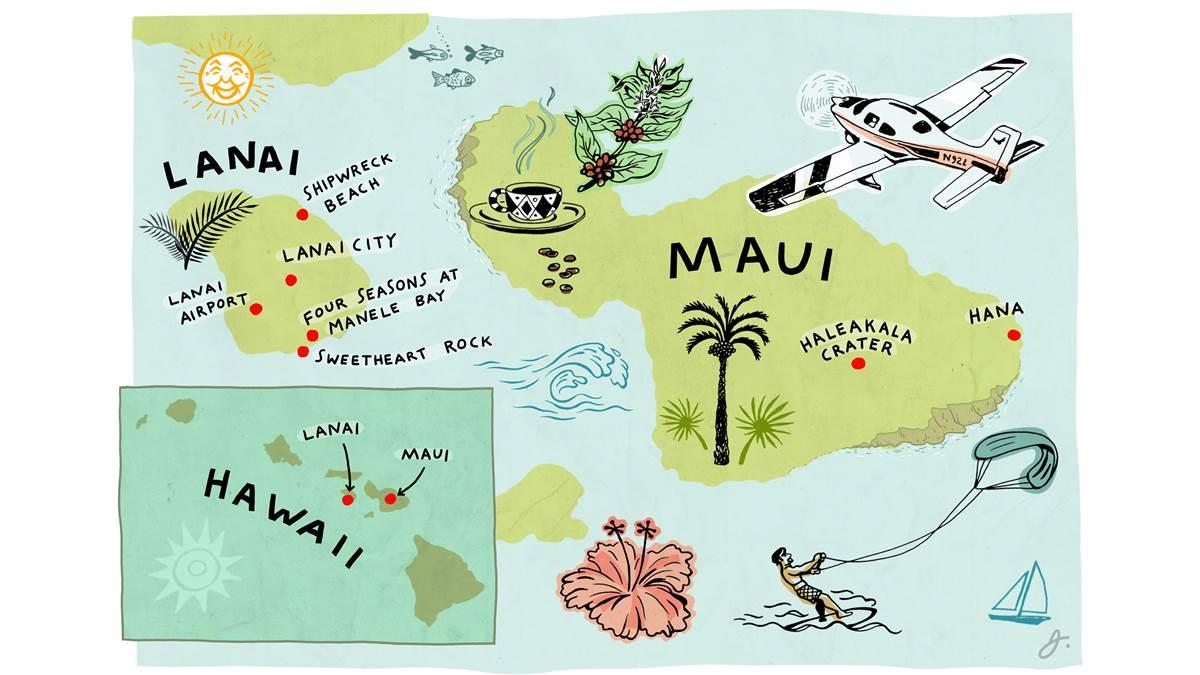 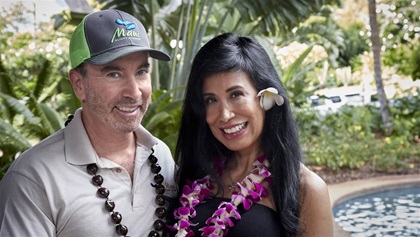 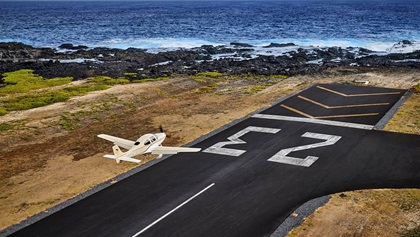 Laurence Balter and Reginia, his über-friendly and extremely helpful wife and business partner (she runs all the bookings and the business side; he simply flies) are firmly entrenched in the culture and life of Maui. Their two sons are high schoolers there. It’s a simple business, based at Maui’s Kahului Airport in a hangar south of the main terminal. You can get flight instruction, tours, PIC rides (you in the left seat), as well as lessons in Balter’s passion: landing with the angle of attack (AOA) indicator. He’s a passionate pilot and very concerned about pilot safety. There’s just N779LB, his Cirrus SR22, but it really is a magic carpet to fly Hawaii. Trip Advisor has Maui Flight Academy on its top things to do in Maui and ranks the experience with four stars.—JSW 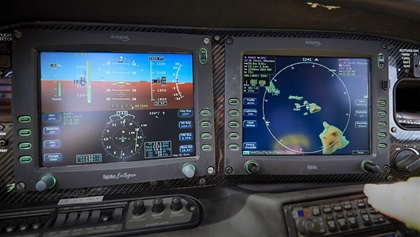 You’ll get lei-ed as soon as you arrive at the resort—a beautiful Kukui nut necklace is draped around your neck and a refreshing shot of a ginger and lime concoction brightens your spirits. The open-air foyer looks out over the swimming pools and botanical gardens and beyond the bluff to the beaches on Hulopoe Bay.

Although we arrived the best way—Balter’s Cirrus—guests also come from Maui or one of the other islands via Lanai Air, a charter service that uses a Pilatus PC–12. It costs $250 per person and the same resort amenities such as gracious service are included. Guests also can arrive via the airlines (Mokulele and Hawaiian offer service) or by ferry from Maui.

Although there are many things to do on this unspoiled island—there is only one road and no stoplights—most can be explored via four-wheel drive, boat, or horseback. We, though, are here to fly.

Balter loves his Cirrus for a lot of reasons that also illustrate his love for Hawaii. First, he says, the Cirrus’s carbon composite construction makes the aircraft resistant to corrosion; when you’re flying over water, island to island, that salty air can take its toll. The parachute system also is one of its attributes: “The airplane is perfectly suited for Hawaii operations,” he says. “Even though it’s a low wing, the large windows offer an excellent view, and because we fly over water, having the parachute reduces the risk and can be easily seen by the Coast Guard.”

And what about letting just about everybody else fly left seat? “Having instructed more than 10,000 landings in the SR22, I have more right-seat time than left,” he says. “Plus, all our flying experiences are designed for left-hand-side viewing; whether it’s volcanoes or waterfalls, along the coast it’s all to the left.”

As he would do for anyone, Balter flies to what he considers the high points of a GA flight around the islands in the short time we have. So, the Cirrus takes a path over Wailea in South Maui, where there are beautiful beaches and stunning water views, to the back side of Haleakala Crater to land at Hana, the coastal rainforest. At Molokai are the tallest sea cliffs on the planet, and upon landing in Kalaupapa, the ocean splashes against the runway. Balter is an exceptional tour guide, pointing out the Molokai sweet potato farms and coffee fields.

There hasn’t been much rain, so the islands do not appear as lush—or the waterfalls as dramatic—but the experience is awe inspiring. Around Lanai he shows us Shipwreck Beach and, after clearance from Maui Tower, drops close to the infamous coffee fields there (Maui-grown coffee is “out-Kona-ing” the more well-known Kona coffee). All the while Balter is either telling stories, offering history, or playing his music. Especially gratifying is a recording of retired astronaut Ron Garan, who narrates flying over the Haleakalā volcano and compares the experience to an analog mission on Earth to replicate what life will be like on Mars.

Like all flying around the Hawaiian Islands, it’s mind-blowing. Pinch me.

Somewhere over the rainbow 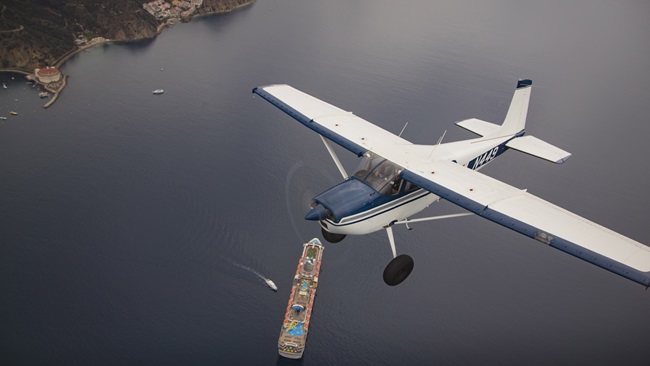 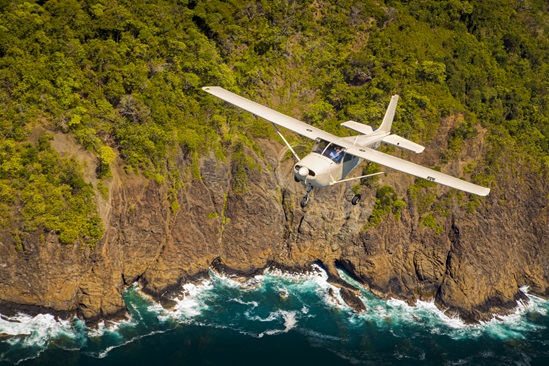 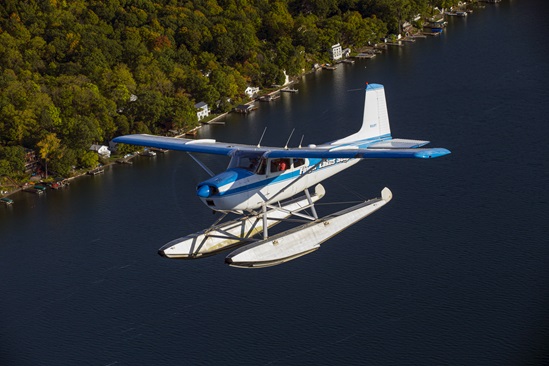