GA helps save patients in Vermont

The University of Vermont Medical Center (UVMC), in Burlington, Vermont, was bearing the burden of collecting coronavirus test samples from patients being seen in 120 doctor’s offices and 17 urgent care facilities in rural Vermont and upstate New York. As the virus infection rates were climbing precipitously in late March and early April, the local laboratory system had become overwhelmed while awaiting new equipment and increased testing capacity to be established. 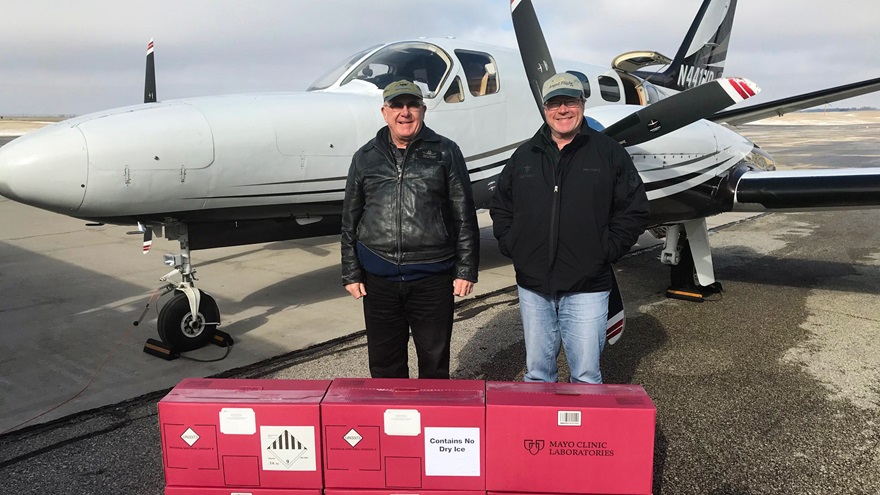 Pilots Hobie Tomlinson (left) and Kirk Walters (right) stand with packages of COVID-19 test kits being taken to the Mayo Clinic by the daily general aviation shuttle established by Walters. His Cessna 441 Conquest II flew 11 missions over the same number of days and helped carry over 5,000 test kits between the University of Vermont Medical Center and the Mayo Clinic. Photo courtesy of Kirk Walters.

The state needed an immediate and short-term solution to rapidly increase the volume of tests they could handle, and it was the quick thinking of a general aviation pilot serving in state government that established just such a temporary bridge.

Vermont Department of Public Safety Commissioner Mike Schirling, a GA pilot and a Beechcraft Bonanza owner, instantly recognized the potential of GA to offer a short-term and rapid response to the need. He placed a phone call late on March 29 to Kirk Walters, an Angel Flight Northeast volunteer whom he knew through the local aviation network. By sunrise on March 31, a daily GA shuttle carrying cases of test samples from hundreds of patients was airborne.

The flights had the potential to be lifesaving. 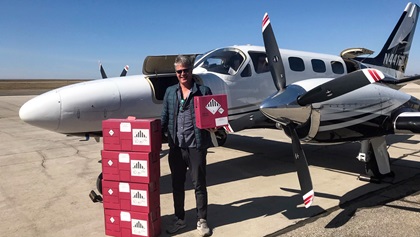 Over the next 11 days as the daily flights carried test specimens to Minnesota, infected patients and their doctors were learning of their COVID-19 test results in less than 24 hours. Tests collected by the UVMC each day were packaged and prepared overnight. At 7 a.m. each day, the shuttle flight was en route to Minnesota, and results were communicated back to doctors in Vermont within hours, directly empowering swift and effective treatment decisions.

Walters and Martti Matheson, partners in a Cessna 441 Conquest II, volunteered their aircraft and time to fly the daily missions under the umbrella of Angel Flight Northeast. They were joined during the second week of missions by owners of a Learjet 60. Flying every day for 11 days, the two aircraft flew 21,400 flight miles and delivered over 5,000 COVID-19 test kits to the Mayo Clinic.

“I think it highlights just how critical general aviation is to our communities in managing through times of crisis,” Walters said. “In this case, neither the state, UVMC, nor the Vermont National Guard had the necessary aircraft to meet the needs of this mission. All it took was one call…and within two hours they had an open-ended commitment from the Vermont GA community, supported by Angel Flight Northeast, to do these missions.”

The last flight in the series of missions occurred on April 10. At that point, the UVMC had acquired the essential equipment to effectively process the volume of tests in their own laboratory and no longer needed support from the Mayo Clinic.

As he reflected on the value of his contribution to the flights, it became quite personal for Walters.

“A lady from my church called me,” he recounted. “’My grandson just got tested for COVID,’ she said. ‘I am very concerned for him. I am pretty sure his test was on your flight to the Mayo Clinic today.’”

Aided by the speed the GA shuttle afforded the laboratory, the quick return on test results helped the family immensely. It turns out he just had the flu, and has recovered nicely.

AOPA Senior Director, Outreach and Events
Chris began working for AOPA in 2013, but has been a private pilot and AOPA member since 2001. He flies VFR all over the country both for fun and as a part of his role leading AOPA events and regional fly-ins.
Go to Chris Eads's Profile
Topics: Public Benefit Flying, COVID19