Tuskegee Airman Hilton Carter, a Columbus, Ohio, resident who went on to a distinguished career of public service after World War II, died May 6 at age 91. 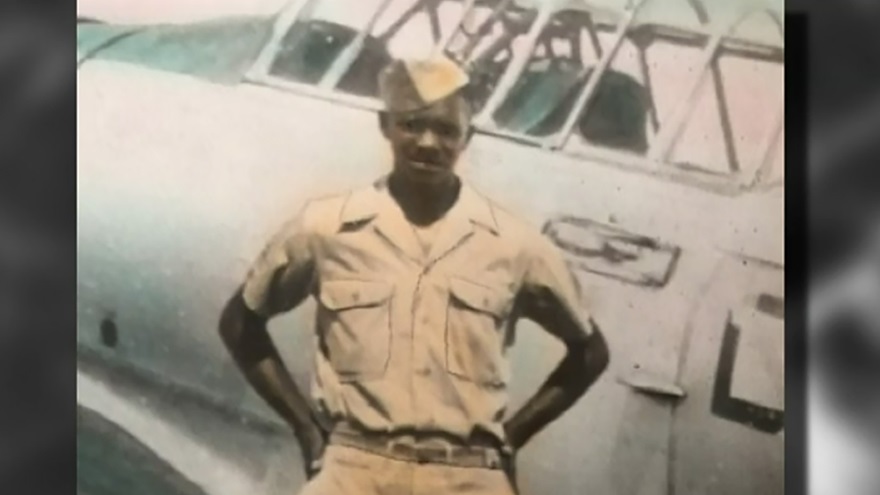 Tuskegee Airman Hilton Carter went on to a career in public service in Columbus, Ohio. He died May 6 at the age of 91. Image courtesy of the Hilton Carter family, via Marlan J. Gary Funeral Home.

In an undated video, Carter recalled that he was a crew chief for then-Maj. Daniel “Chappie” James Jr., who went on to become the first African American to achieve the rank of full general.

The crew chief saw battle from the warbird aircraft he serviced when substitutes were needed to fill-in for a flight mission crew.

“I was a crew chief … and a gunner, or whatever they needed,” he recalled in the video. He flew in Boeing B–29 Superfortresses, Curtiss C–46 Commandos, Fairchild C–119 Flying Boxcars, and Consolidated B–24 Liberators—a heavy bomber that he “didn’t like.”

He was “involved during the pivotal final months of fighting in the Pacific that led to Japan’s surrender in August 1945,” the Columbus Dispatch-News reported.

Carter said one of his more harrowing experiences outside combat was when an engine on a Fairchild C–119 personnel and cargo aircraft caught fire over Wilmington in Ohio’s Clinton County.

“It was too low to bail, so we had to crash-land it,” he said. “I came out of that OK, and I thank God for that,” the newspaper reported.

After the war, Carter settled in Columbus and held various posts in the city, Franklin County, and state.

Ohio’s Franklin County Board of Elections released a statement complimenting Carter’s “long and illustrious career of public service” with the group and pointed out that “his sacrifices to defend democracy will not be forgotten.”

He was part of the group of airmen recognized by a Congressional Gold Medal. The pioneering all-black 332nd Fighter Group, 12th Air Force, served in the European theater and in North Africa. The group picked up their noteworthy “Red Tails” nickname from the red-painted tail feathers of their Republic P–47 Thunderbolts and North American P–51 Mustangs flown for the 15th Air Force during fighter missions and long-range bomber escorts.

His brother-in-law Willie Keaton told the Columbus News-Dispatch that Carter “faced obstacles but remained committed to justice.” After the war, he remained with the U.S. Air Force until 1949, and continued to serve as a civilian flight engineer, the newspaper reported.

In 2012 Carter was part of a welcoming committee that greeted former President Barack Obama at Rickenbacker International Airport, the Ohio airfield that was previously known as Lockbourne Air Force Base when the Tuskegee Airmen were based there in 1946.

Carter received a military sendoff during his funeral May 11, which included a flyover performed by an Ohio National Guard Boeing KC–135 Stratotanker jet.