Get the app Get the app
Already a member? Please login below for an enhanced experience. Not a member? Join today
News & Media Manned space launch from US set for May 27

TFR to be in effect for key SpaceX flight test

NASA announced that the first astronauts to launch from U.S. soil since 2011 will lift off toward the International Space Station on May 27 aboard the SpaceX Crew Dragon vehicle. 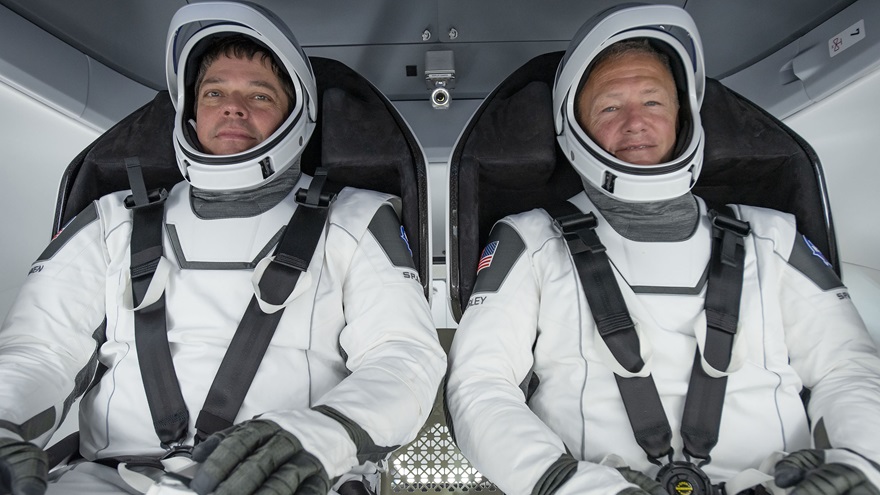 NASA's SpaceX Demo-2 mission will return U.S human spaceflight to the International Space Station from U.S. soil with astronauts Robert Behnken and Douglas Hurley on an American rocket and spacecraft for the first time since 2011. Photo courtesy of NASA.

Astronauts Bob Behnken and Doug Hurley from NASA’s Commercial Crew Program are in preflight quarantine at the Kennedy Space Center in Florida as the countdown continues toward their 4:33 p.m. Eastern Daylight Time launch on May 27 leading to a May 28 docking with the space station at 11:39 a.m.

“They will open the hatch about two-and-a-half hours later to join the Expedition 63 crew and ramp up space science activities,” NASA said.

The FAA notified AOPA that a temporary fight restriction will be in effect to inform pilots of the activation of an Aircraft Hazard Area (AHA) in the vicinity of the Kennedy Space Center on the day of the launch. In a March letter to AOPA, the FAA noted that its policy of using TFRs to provide flight safety during space launches was applicable for on-shore and offshore launches. TFRs are “easily recognized and understood by the aviation community” for both types of launches, the FAA said.

AOPA had raised concerns about the FAA’s use of Altitude Reservation (ALTRV) notams to alert pilots of space launches more than 12 nautical miles from shore. AOPA argued that a TFR was more appropriate given safety considerations.

NASA, heralding “a new era of human spaceflight,” said the Falcon 9 rocket’s liftoff from Launch Complex 39A will send the astronauts aloft “for an extended stay at the space station” for SpaceX’s second demonstration mission to the space station, intended to “validate the company’s crew transportation system, including the launch pad, rocket, spacecraft, and operational capabilities.”

Data from the test flight is expected to advance the process of certifying the crew transportation system “for regular flights carrying astronauts to and from the space station.”

No end date has been set for the mission, which was also to be the first time NASA astronauts get to test the spacecraft systems in orbit, NASA said.

The launch will air live on NASA Television and the agency’s website.

Dan Namowitz has been writing for AOPA in a variety of capacities since 1991. He has been a flight instructor since 1990 and is a 35-year AOPA member.
Go to Dan Namowitz's Profile
Topics: Advocacy, Temporary Flight Restriction, FAA Information and Services