Get the app Get the app
AOPA will be closed July 4th, in observance of the Independence Day holiday. We will reopen at 8:30 am ET on Tuesday, July 5.
News & Media Avionics: Obsolete panel made modern

Shouldn’t there be more instruments in this panel? Did the avionics shop forget to install something? The first impression of the avionics overhaul in this Bonanza A36 is that something must have been left out. There don’t seem to be enough screens, knobs, or instruments—and vast areas are as barren as the Sahara. 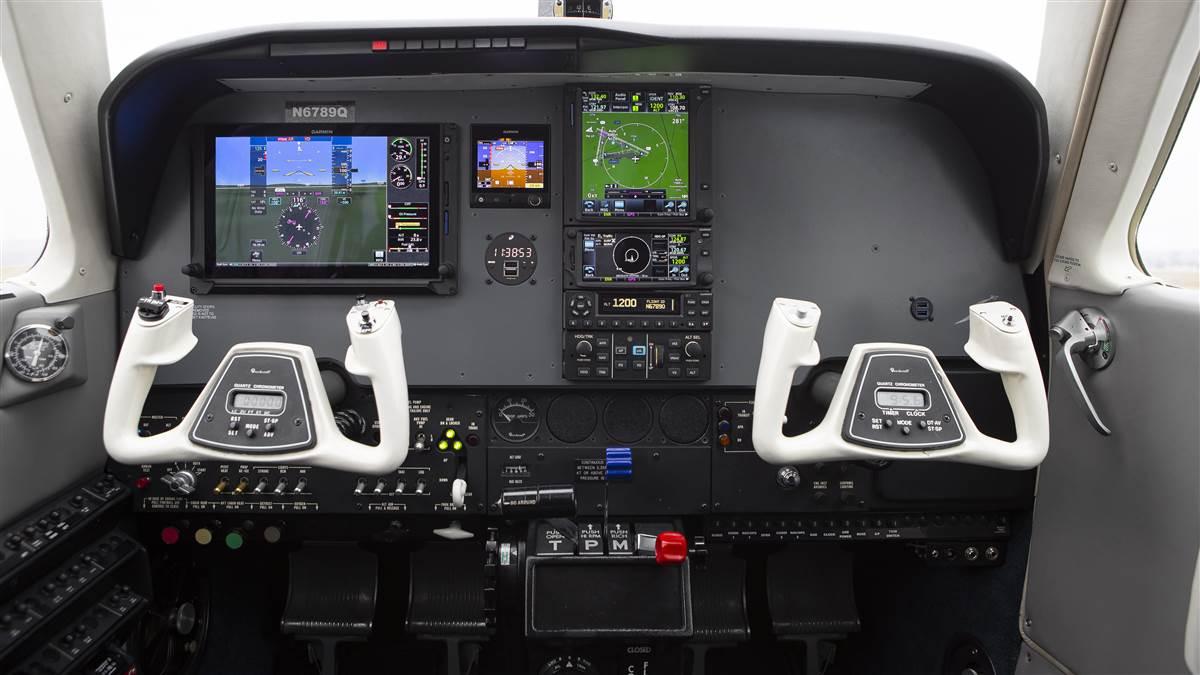 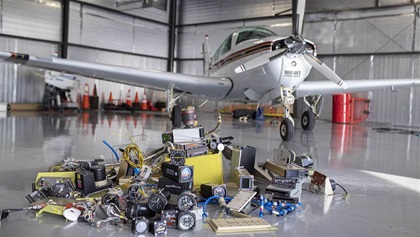 “No, this is everything you need, and everything you ordered,” Ben Travis, owner of Smart Avionics in Donegal Springs, Pennsylvania, said in answer to the impertinent, but inevitable, “Is it all there?” question. “This airplane has more and better IFR instrumentation than it’s ever had—and it’s 125 pounds lighter.”

The entire right side of the panel is gray metal, and most of the round instrument holes on the subpanel are filled with plugs. The round-dial, analog instruments that used to be there are just gone.

The left side of the panel is populated by a 10-inch Garmin G500 TXi primary flight display/multifunction display, and a back-up G5 attitude instrument. The center stack consists of a GNS 750/650 combination, a Garmin 345 transponder (with ADS-B In and Out), and a GFC 500 autopilot head with a blue Level button.

The digital instrument panel is a massive change for this 1989 model airplane that came from the factory with all the avionics options. The airplane had been pampered and lovingly maintained by its one and only owner, Maury Patkin—but its VOR-based KNS-80 navigation system was obsolete, an aftermarket Apollo GX60 GPS was so dated that getting database updates was nearly impossible, and its Argus 5000 moving map seemed to belong in an avionics museum.

Patkin donated the airplane to AOPA in 2019 with the stipulation that the association use it as a business aircraft to advance general aviation. AOPA is giving it the distinctive N number 4GA, and began using it for its intended purpose—but it was obvious from the start that the panel would have to be updated in order to fit in the modern IFR environment.

I was in the airplane with AOPA Air Safety Institute Executive Director Richard McSpadden on one of its first cross-country trips for the association when the airplane’s primary vacuum pump failed, and the attitude indicator gradually gave up and rolled onto its side. Fortunately, it was a spectacularly clear day, and this airplane had an ace in the hole in the form of a standby vacuum pump.

I activated the standby vacuum system and watched with satisfaction as the suction gauge instantly went from zero to a healthy margin and the attitude indicator snapped back to reality.

McSpadden and I praised the forward-thinking Beechcraft engineers who had built redundancy into the system that makes aviation so safe and continued our trip. Then, 45 minutes later, somewhere over New York, the secondary vacuum pump also failed, and the attitude indicator died again—this time permanently.

We started looking at repair options as soon as we got home—and Tom Turner of the American Bonanza Society volunteered a pair of vacuum pumps that had been replaced on a similar aircraft. But those pumps turned out to be incompatible. We poked around on eBay looking for suitable stand-ins, but then-AOPA Vice President for Flight Operations Mike Filucci told us to stand down. “This is the twenty-first century, and I am done with vacuum pumps,” he said. “Their time has come and gone, so I’m not going to spend a dime on vacuum pumps. Even if you get them for free, I won’t install them.”

Filucci hired Smart Avionics to modernize the Bonanza panel with ADS-B In and Out, a pair of WAAS GPS nav/coms, two solid-state attitude and heading reference systems (one each in the G500 TXi and G5 standby instrument), and a digital autopilot.

We chose a VFR day for the 55-nautical-mile flight to Donegal Springs (N71) because the Bonanza was no longer legal to fly in the clouds. About 90 days later, the airplane had been transformed into a sophisticated IFR traveler fully capable of providing reliable regional business transportation.

Flying single-pilot IFR is a pleasure with the tight avionics integration, and situational awareness is vastly enhanced with GPS-derived synthetic vision, in-cockpit weather and traffic, and graphical terrain and obstacle warnings.

That’s not to say the airplane is totally predictable. While checking out a fellow pilot in the airplane, I asked him to perform a steep, 360-degree turn. After about 180 degrees of turn in a 60-degree bank, the autopilot overruled us. It engaged itself in the Level mode and promptly rolled out. We repeated the exercise several times with the same result.

I had no idea why it did that—and I regarded the behavior as dangerous. AOPA intends to fly the Bonanza as a photo ship for air-to-air photography, and it can’t be allowed to overrule the pilot while being flown in close formation with other aircraft.

The fix, however, turned out to be simple. The autopilot had been programmed to prevent inadvertent graveyard spirals by engaging itself in the Level mode when it sensed a pilot loss of control. By deactivating that setting, the autopilot won’t intervene in the future.

Filucci flew the airplane back to AOPA’s home in Frederick, Maryland, after the avionics upgrade and validated many of its enhancements.

Loading, activating, and coupling IFR approaches was easy to do. Missed approaches are activated and sequenced with a single press of the Takeoff/Go Around button on the throttle. There’s a built-in VFR advisory system that provides course and altitude guidance to thousands of runways around the country, and that just scratches the surface of the new system’s capabilities.

N4GA is ready for many more decades of safe, enjoyable GA flying thanks to the wondrous capabilities of its colorful, thoughtful, minimalist instrument panel.