The federal government has taken another major step toward integration of unmanned aircraft, and while many technical challenges remain, one state on the new FAA program’s roster stands out for developing a ground-based infrastructure that could become a model for situational awareness and safety that others can replicate.

Transportation Secretary Elaine Chao announced the end of the Unmanned Aircraft Systems Integration Pilot Program and the start of a new effort in the same breath. Eight of the nine participants in the UAS IPP (all but the city of San Diego) were named as participants in the new initiative.

“The three years of information gathered under the drone Integration Pilot Program will be applied to a new initiative called BEYOND, which will further advance the safe integration of drones into our national air space,” Chao said.

Launched in 2017, the UAS IPP tested a range of applications and missions, including flights beyond visual line of sight (BVLOS), widely viewed as essential to enabling package delivery, infrastructure inspection, emergency response, pest control, and other uses that will drive the utility and utilization of unmanned aircraft. To date, most such efforts have been limited in scope and experimental, approved by the FAA on a case-by-case basis.

“AOPA congratulates the FAA and the nine IPP participants for their work toward safely integrating unmanned aircraft into the national airspace system,” said AOPA Senior Director of Regulatory Affairs Christopher Cooper. “AOPA supports the FAA's BEYOND program and we look forward to working with industry to support technology that not only provides scalable beyond line of sight operations, but will also ensure safety and collision avoidance without requiring additional equipment, services, and/or airspace restrictions to manned aircraft.”

Two days ahead of the FAA’s announcement that the UAS IPP is now going BEYOND, North Dakota announced that a $28 million state investment allocated in 2019 will soon result in the creation of a massive network of ground-based sensors, communications systems, and data processing infrastructure that will support safe operation of drones flown BVLOS and enable users to detect and avoid so-called “non-cooperative” aircraft, a description often used in engineering circles for aircraft flown at low altitude without equipment to broadcast the aircraft’s position.

On-board electronics that enable unmanned aircraft to detect other flying objects may still prove the most scalable answer, and at least one such system has shown promise: Iris Automation, a San Francisco tech startup, announced the Casia 360 system in April, the latest iteration of a system that matches cameras with computers running sophisticated motion detection algorithms and can automatically move the drone out of the path of any conflicting air traffic. Iris has worked with UAS IPP participants, and more recently, the Canadian government issued a special flight operations certificate to conduct power line inspections in Quebec using Casia-equipped unmanned aircraft.

Active airspace surveillance by the drone is only one element of the larger system required to safely integrate unmanned with manned air traffic, and it remains to be seen if systems like Casia will be deployed at scale, when drones begin to darken the skies delivering packages of consumer goods, or defibrillators and critical medicines to medical emergency scenes.

North Dakota is taking a different approach, building a ground-based network of sensors including radar systems, as well as command and control radio relays, and an operations center that can manage the flow of safety critical data. The Northern Plains UAS Test Site, among the longest-running efforts to research and develop drone solutions in the country, will manage the statewide BVLOS network called Vantis, the first of its kind in the country, according to the October 28 announcement.

Vantis offers the tantalizing prospect that drones could be flown long distances through integrated airspace without significantly increasing the risk of midair collisions, and without requiring active participation in drone traffic management by current general aviation pilots.

Nicholas Flom, who holds an airline transport pilot certificate with more than 4,000 hours flown, is the executive director of the Northern Plains UAS Test Site. He told AOPA in a recent videoconference that Vantis will be analogous to the interstate highway system, a single infrastructure that benefits multiple users. That sets it apart from the surveillance and communications networks created on an ad-hoc basis by individual operators such as BNSF Railway, a pioneer in BVLOS infrastructure inspection.

“The postal service does not build their own roads, we build roads for all users. The airlines don’t land at their own airports and fly on their own navaids,” Flom said. “Right now, we don’t have a good structure in place for multiple users to fly on a single network, and we’re hoping that this really lays the foundation for others to follow.”

Flom’s team is working with the FAA, state transportation officials, and aviation industry stalwarts including L3 Harris Technologies, Raytheon subsidiary Collins Aerospace, and Thales USA, all contracted to build elements of Vantis. The surveillance, communications, and traffic management system will be built out in phases, starting with coverage of the Bakken Formation in the west.

“We’ll have a thousand square miles of surveillance coverage in western North Dakota, through kind of the heart of our oil and gas industry,” Flom said. “We’re going to learn a lot.”

Flom expects that additional investment beyond the $28 million allocated by the state in 2019 will be required to scale up to statewide coverage, and scalability is definitely part of the plan.

“We want this to be something that is not just North Dakota-centric,” Flom said.

North Dakota is not overlooking the potential benefit to a state economy that has taken a hit during the coronavirus pandemic, which has had many deleterious effects including a sharp drop in demand for petroleum products.

“From the Grand Sky research and development park to the nation’s first statewide BVLOS network in Vantis, North Dakota continues to invest in cutting-edge UAS technology and attract new companies and jobs to further diversify and strengthen our economy,” Lt. Gov. Brent Sanford, chairman of the Northern Plains UAS Authority, said in a news release.

North Dakota has long been a hotbed of drone technology research, development, and training. The University of North Dakota established one of the first UAS degree programs in the country and remains among Flom’s many collaborators. It is also the state where CEO Matt Dunlevy launched SkySkopes, a drone services provider headquartered in Minot, with offices in several other states as well.

Dunlevy said his company has grown over the last six-plus years to employ dozens of remote pilots around the country. Market analyst Drone Industry Insights recently named SkySkopes the top drone service provider in the country, though the downturn in the state’s largest economic driver, oil and gas production, has forced the company to adapt. “A lot of these UAS missions (for oil and gas clients) have been kind of put on the back burner for now.”

SkySkopes has replaced some of that lost business with a renewed focus on power line inspections and other infrastructure projects, as well as disinfecting sports stadiums, and wildfire mitigation. Many of Dunlevy’s staff pilots are also certified under Part 61 of the federal aviation regulations, and the company fleet includes Robinson helicopters that carry lidar sensors for infrastructure inspection. That is not to say that Dunlevy expects to grow in that direction in the long run, and he had high praise for the state’s continued efforts to lead the way on UAS integration.

“The momentum, though, it’s palpable. I’m really excited about the UAS industry,” Dunlevy said. “Beyond visual line of sight, that’s the Holy Grail.”

Flom said that having an unmanned ecosystem that includes operators, educators, a GA community that is receptive to integration collaboration, and a state willing to invest in infrastructure is “an economic driver for the state.”

Flom also said that “having a commodity-based economy” that depends heavily on oil, gas, and agriculture “is challenging,” and developing UAS infrastructure is ultimately “a way to diversify the economy.” 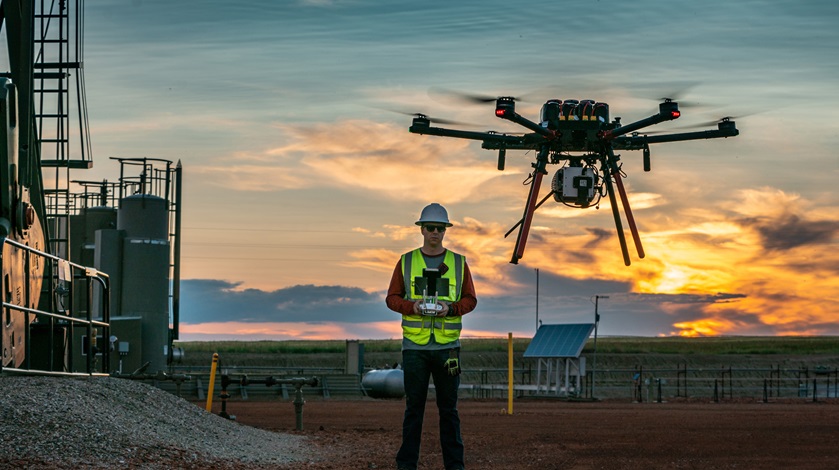