A sweet act of kindness

‘Berlin Candy Bomber’ being considered for Presidential Medal of Freedom

The “Berlin Candy Bomber,” “The Chocolate Flyer,” and “Uncle Wiggly Wings” were all nicknames affectionately given to retired Col. Gail “Hal” Halvorsen while serving as a Douglas C–54 Skymaster airlift pilot during Operation Vittles shortly after World War II. While on assignment, he became widely recognized by the children of Berlin for dropping small-candy-filled parachutes in the Soviet-blockaded city. 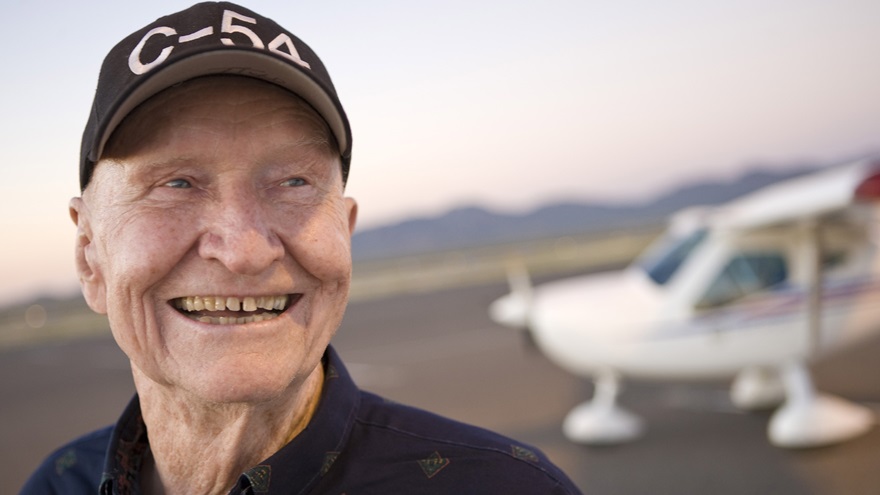 Retired U.S. Air Force Col. Gail Halvorsen, nicknamed the "Berlin Candy Bomber," is in the running for the Presidential Medal of Freedom. Photo by Mike Fizer.

It began after the then first lieutenant offered children two sticks of Wrigley’s gum at Berlin’s Tempelhof Airfield before departing for a flight. Seeing their excitement over the small gesture, Halvorsen promised to drop candy on his next flight, telling the kids he could be identified by his rocking the wings. He managed to convince other pilots to donate their candy rations, giving many German children a glimmer of hope and something to look forward to.

Halvorsen’s self-initiated act of kindness on behalf of the starving children of Berlin became a full-scale operation within the “Big Lift” known as “Operation Little Vittles.” It became a national phenomenon in the United States, supported by towns, cities, and major candy companies. In total, more than 20 tons of candy were dropped during the airlift.

In his own words, Halvorsen said, “My experience on the Airlift taught me that gratitude, hope, and service before self can bring happiness to the soul when the opposite brings despair.”

Halvorsen is a decorated pilot having retired from the U.S. Air Force on September 30, 1974, with more than 8,000 flying hours. Over the years, Halvorsen has accumulated many awards for his humanitarian work and achievements, including The Legion of Merit; Cheney Award, 1948–49; Ira Eaker “Fellow” Award by the U.S. Air Force Chief of Staff, General Ryan for the AFA, 1998; Americanism Award Air Force Sergeants Association, 1998 (Bob Hope and President George H.W. Bush were both previous recipients); Service Cross to the Order of Merit from the President of Germany, 1974; the Freedom Award from the City of Provo, Utah; the Distinguished Humanitarian Award from the Institute of German American Relations, 1999; and with some other Airlift pilots the Eric Warburg Pries, 1998 (Henry Kissinger was a previous recipient).

At 100 years old, Halvorsen is now in the running for the Presidential Medal of Freedom. This honor is typically granted to those contributing to the “security or national interests of the United States,” “world peace,” or “cultural or other significant public or private endeavors." Halvorsen exemplifies all these attributes: His kindness, respect, and compassion for all people is unwavering.

On November 2, a letter from President Donald Trump confirmed that Halvorsen is being considered for the medal but needs a petition with 100,000 signatures by November 22 for the White House to take action.

Those who wish to support Halvorsen for his humanitarian work can sign the petition and share via social media. Individuals will receive an email confirmation that requires a response in order to have their signature count.