Get the app Get the app
Get the latest news on coronavirus impacts on general aviation, including what AOPA is doing to protect GA, event cancellations, advice for pilots to protect themselves, and more. Read More
Already a member? Please login below for an enhanced experience. Not a member? Join today
News & Videos Airports: Ken Jernstedt Airfield, Hood River, Oregon

After his audacious solo flight to Paris, and winning the Orteig Prize, Charles A. Lindbergh promoted aviation wherever he went, including in the fruity fields of Oregon along the mighty Columbia River. 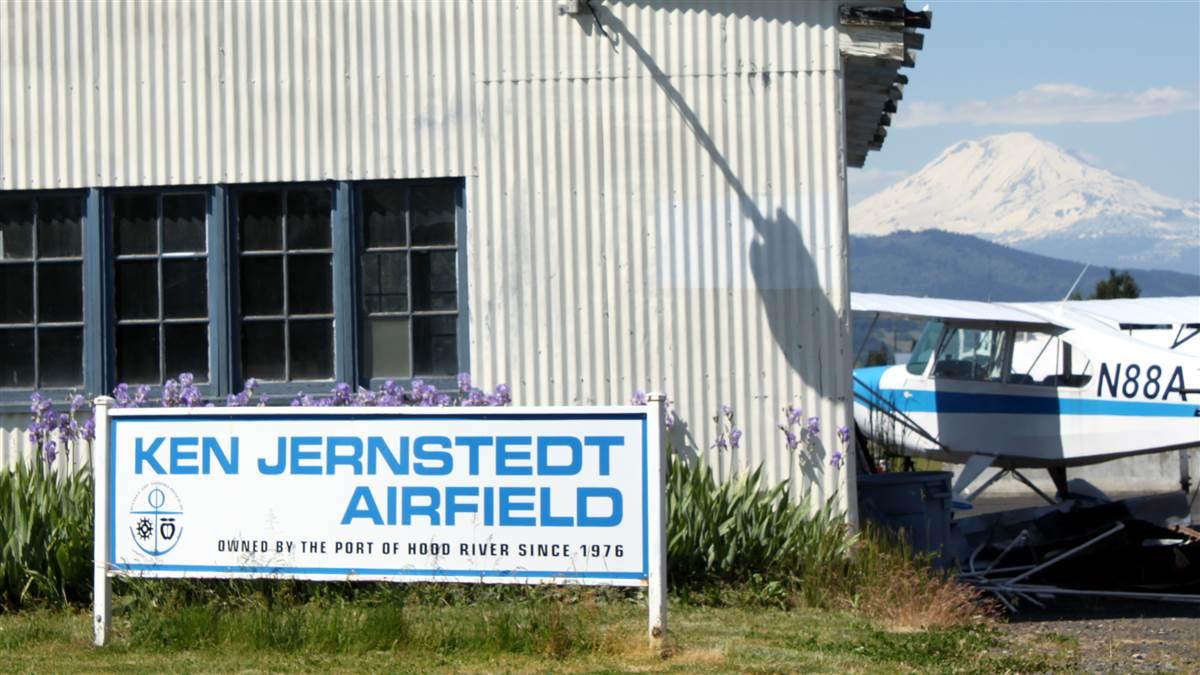 Two months after landing in Paris, Lindy took off for a nationwide tour, landing the Spirit of St. Louis in 92 cities and each of the 48 states. On September 16, 1927, Lindbergh flew up the Columbia River Gorge from Portland, Oregon, before turning south toward San Francisco. The event inspired the people of Hood River, and by March 1928 a patch of grass was marked by white stones as an airfield on the south edge of town. As Hood River grew larger, the grass airfield closed and an airport was built at its current location three miles south of the river and town, among the orchards for which Oregon is famous.

Ken Jernstedt Airfield (4S2) is encircled by the “Fruit Loop,” a 35-mile scenic drive developed by the Hood River Chamber of Commerce. The route takes tourists through the fruit orchards and past farm stands where they can buy fresh apples, peaches, and berries. If you want to pick your own, many farms allow “u-pick” during the harvest seasons that range from early June for strawberries; June to August for cherries, raspberries, and apricots; and until late October for apples, pumpkins, and pears. HoodRiverFruitLoop.com has maps and a schedule of harvest dates.

You won’t go hungry or thirsty around there; the loop includes wineries, vineyards, bakeries, breweries, a cidery, as well as a lavender farm. The Columbia River offers water recreation and nearby Mount Hood is popular for skiing, climbing, and hiking.

Ken Jernstedt Airfield was named after a World War II Flying Tigers fighter pilot, and test pilot, who moved to Hood River after the war and became its mayor. Today, it’s a center for tailwheel pilots, primarily because of TacAero, a flight school that specializes in teaching the techniques of flying airplanes with conventional landing gear. TacAero offers basic and advanced classes for flying tailwheel aircraft, and type-specific training in CubCrafters airplanes. They’ll also train new students from day one in tailwheel aircraft. For pilots seeking solitude, social distancing, or adventure, TacAero also teaches basic and advanced backcountry flying techniques.

Hood River Soaring is based at Jernstedt and can introduce power pilots, and nonpilots, to the thrill of soaring with introductory and scenic rides. Glider pilots can hire the towplane or rent a glider from the club. With excellent soaring conditions, this could be the place to add on that glider rating.

Western Antique Aeroplaneand Automobile MuseumThe Western Antique Aeroplane and Automobile Museum, also located on the airport, exhibits an extensive collection of antique airplanes, more than 100, of which about 20 are gliders and many still fly. The automobile collection numbers more than 175 cars, trucks, tractors, and other transportation artifacts. Contact the museum to learn when the antique airplanes may be flying.

Dennis K. Johnson is a private pilot and frequent contributor to AOPA publications.