Editor's note: This article was updated with additional information September 14.

General aviation pilots can participate in a 50-state aviation relay thanking medical professionals on the front line of the coronavirus pandemic. Multiple flight legs begin September 24 from San Diego and include handoffs to fellow aviators of a commemorative flag and torch to be displayed October 30 in Washington, D.C., after the conclusion of the flights. 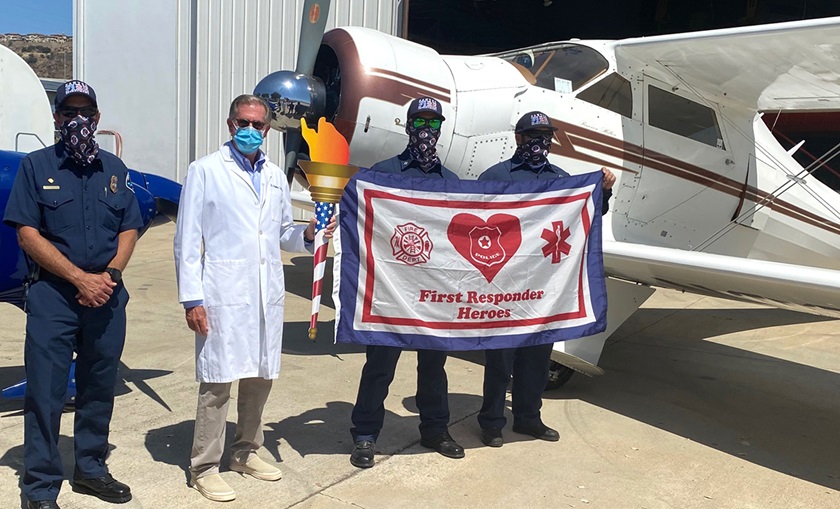 The aerial flight relay recognizes everyday health care heroes with short hops through 48 states that pause at GA airports to transfer a special flag and a red, white, and blue torch, reminiscent of an Olympic torch relay. At each stop along the way, a handful of doctors, nurses, caregivers, first responders, and others will be recognized for their efforts to battle the coronavirus pandemic. Individual flags representing each state will be woven into a 15-foot-by-35-foot flag and carried through the national capital, said Spirit of Liberty Foundation Chairman Richard Rovsek, who is organizing America’s Operation Thank You: The Relay in the Sky. If all goes well, plans are in place for the unity flag to be marched from the U.S. Capitol along the National Mall to the White House.

“I really admire the health care people and what they’re going through,” said Rovsek, who was moved to honor medical professionals in some way after viewing their dedication during personal health care experiences. “There are people in the emergency room working 12 hours or longer. It’s a horrible, horrible time.”

Pilots can sign up online and volunteer to fly a leg of their choice during the five-week, coast-to-coast journey.

He was drawn to establish the flag flight relay after a classmate made a flag with a heart and a health care icon and “hundreds of orderlies, doctors, and other professionals spontaneously” had their pictures made with the emblem—then posted the visuals to social media. The flag has previously been unfurled above state capitals, health care centers, and other locations, and it led to a nationwide plan to boost morale for those protecting others.

“I said, ‘We can do this with the help of the aviation industry,’” but it “really has to be done nationally,” he explained. He anticipates the mission will bring unity to families experiencing the stress of the coronavirus pandemic. “We call it ‘America’s flag,’ because it truly is” the people’s symbol, Rovsek said. Future plans include the banner making appearances “for years to come.”