Get the app Get the app
Get the latest news on coronavirus impacts on general aviation, including what AOPA is doing to protect GA, event cancellations, advice for pilots to protect themselves, and more. Read More
Already a member? Please login below for an enhanced experience. Not a member? Join today
News & Videos Colorado pilots upbeat about new seaplane base

Colorado seaplane pilots are hopeful that the opening of a privately owned base for float-equipped aircraft on Kenney Reservoir will help get their initiative to restore seaplane access to state- and federally owned waterways up on the step. 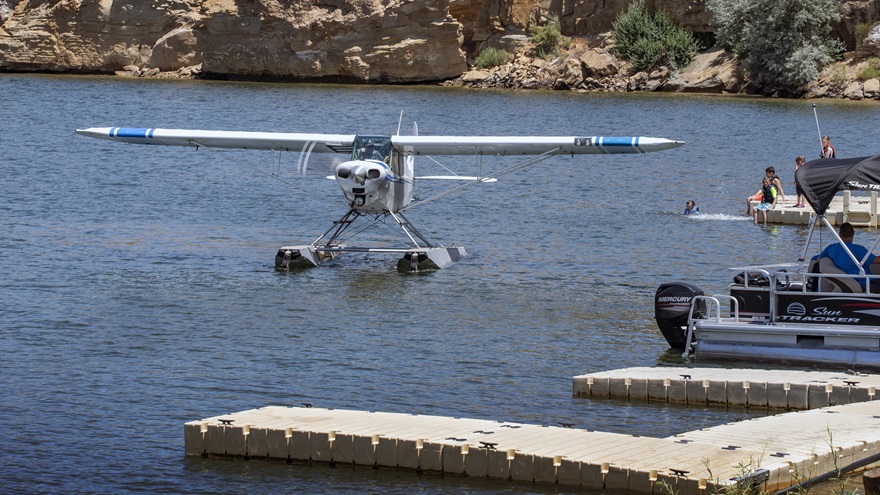 The Colorado Seaplane Initiative, an advocacy effort led by Seaplane Pilots Association Colorado Field Director Ray Hawkins, “has been working tirelessly along with the Seaplane Pilots Association to secure seaplane access to state and federally owned public-use waterways in Colorado for over a decade,” said Josh Pruzek, AOPA Northwest Mountain regional manager. The seaplane ban “was instituted years ago over concerns that Colorado waterways were becoming overcrowded and that more needed to be done to protect them from invasive species,” he said, noting that Colorado is the only state with a ban in effect.

The Kenney Reservoir Seaplane Base is operated by the Rio Blanco Water Conservancy District, which was created “to lead in the protection, conservation, use, and development of the water resources of the White River Basin.”

The organization, based in Rangely, lists seaplane aviation among its recreational assets and notes on its website that “we are working with the Colorado Seaplane and AOPA to make a landing on Kenney Reservoir an enjoyable time.”

No aircraft services are available at the seaplane base, but amphibious aircraft can receive services at Rangely Airport including fuel, maintenance, and invasive-species inspections, Pruzek said.

“Seaplanes can operate safely from Colorado waterways, and seaplane pilots can responsibly deal with common concerns such as invasive species, just as they do in the 49 other states,” he said, adding that the local float-flying community believes that the opening of the seaplane base represents a step toward convincing state and federal government officials that the time has come for reform.

On October 7, the Colorado Seaplane Initiative will be on hand at Wings Over the Rockies' Exploration of Flight facility at Denver’s Centennial Airport during the Great Waco Biplane Tour of 2020, where attendees can also see the newly certified amphibious Waco YMF–5 and other aircraft. Admission is free. All state and local COVID-19 protocols will be in effect for the event, Pruzek said.