'Barn door in a hurricane'

You’ve been in cruise for 30 minutes when there’s a thump and a roar, and a pitch and a roll. For the next 17 minutes, you will use everything you ever learned about flying to get an airplane with a damaged wing and fuselage, a dead engine with its cowling peeled back like a banana, and 149 people aboard safely out of the sky. 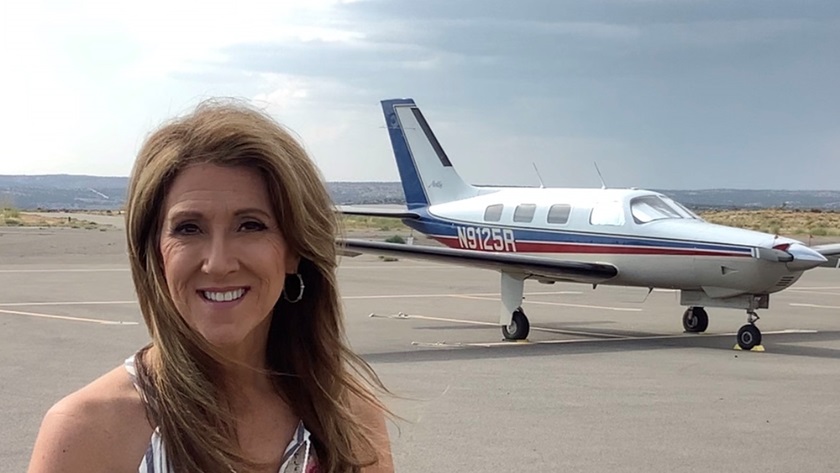 Tammie Jo Shults was a captain with Southwest Airlines who became a household name and a sought-after public speaker after guiding a Boeing 737 with one good engine, wing damage, a depressurized cabin, and multiple system failures to a safe landing in Philadelphia on April 17, 2018, with her first officer, Darren Ellisor.

Shults, who retired from the airline in August, is a pilot’s pilot. She readily agreed to share with our general aviation readership some key “aviation takeaways” about handling the “unscripted combination of emergencies” she and Ellisor had to confront as the stricken jet’s aerodynamic behavior changed from minute to minute during their effort to diagnose the damage and divert to their emergency destination.

To recap, Southwest Airlines Flight 1380 departed LaGuardia Airport in New York City headed for Dallas, and was climbing through FL320 just after 11 a.m., when the left engine of the Boeing 737-7H4 destructed, ejecting fragments that struck the fuselage, the left wing, and the left horizontal stabilizer. “One fan cowl fragment impacted the left-side fuselage near a cabin window, and the window departed the airplane, which resulted in a rapid depressurization,” notes the NTSB’s accident report.

Shults recalled feeling the jolt of the engine’s destruction before hearing it.

“We went through a pitch-over, a snap roll, and a skid in one moment in time,” she said.

The crew’s first impression was that the left engine was on fire, but the aircraft’s behavior kept changing, and what had happened was unclear.

“You know what? We prioritized,” she said.

All pilots learn the “aviate, navigate, communicate” method of handling trouble—but in the real world, linear training concepts come with a twist.

“Sometimes you get through ‘aviate’ and you’re right back to ‘aviate,’” she said. “In an emergency, you don’t always get to go through all three before you cycle back to what’s getting your attention.”

There was a plume of smoke, condensation had formed in the cockpit, and a deafening roar told the pilots that the aircraft had been compromised. They knew rapid decompression had occurred by the “icepick pain in both our ears, and then you realize you are not able to breathe,” she said.

In any aircraft with a two-pilot crew, it is essential to know who is flying the aircraft. Ellisor had been the pilot flying on this leg. With the noise level restricting communication to hand signals, Shults gestured that Ellisor should remain on the controls while she pulled the quick reference handbook to troubleshoot.

“I tapped his arm, nodded at him, and took my hands off the yoke,” Shults said.

Pushing away thoughts of airline accidents linked to crew-coordination lapses, Shults vowed that it would not happen to them, telling herself, “We are going to have an organized division of labor.”

One at a time, they donned headsets. About a minute after the cockpit voice recorder picked up the sounds of increased background noise in the cabin, Shults notified air traffic control of the suspected engine fire. The CVR transcript notes that next she made an announcement over the public address system: “Ladies and gentlemen this is your captain we're going into ah to Philadelphia ah remain seated thank you.”

Shults believes that making the announcement “turned out to be such a good move” because it let the cabin crew know that the pilots had the jet—by then descending at about 5,000 feet per minute—under control.

“They had to be startled to mind-numbing fear. We were letting them know that we were not going down, we were going into Philly,” she said.

“The flight attendants changed the outcome because of their attentiveness and helpfulness,” Shults said. “They spurred other passengers to look around and see where they could help.”

The cabin crew communicated back to the cockpit from where the fuselage breach had occurred. Shults could not see the left engine, but now there was no fire indicated. She secured the fuel, noting that under the circumstances they “couldn’t do this as nice and orderly as you’d like.”

It was during descent that the pilots became fully aware of how much aerodynamic drag the damage had caused; by then they also knew there was a window out “and a very injured passenger, at best.”

“We never had the same airplane from minute to minute to fly,” Shults said, describing constantly changing control inputs “to keep from skidding sideways,” and the challenge of slowing down for the shuddering to abate enough “to read instruments and reach knobs.”

Descending toward Philly, “The decision ran through my mind that we are going to do the best we can flying this airplane,” she said. “We have to maintain control, or it won’t matter about the checklists.”

Shults had been a pilot in a U.S. Navy aggressor squadron before going to the airline. Having tapped her aerobatic skills when the 737’s engine blew, she now sought a “feel” for the airplane’s aerodynamic state as she took over the controls at a high enough altitude to assess the Boeing’s condition and make decisions about the landing. (As a naval aviator Shults flew tactical missions in the LTV A–7 Corsair and McDonnell Douglas F/A–18 fighters, and she strongly recommends that GA pilots take at least five flights of aerobatics. Learning how to take back control after being upside down and out of control is “very reassuring,” and it was “really helpful having had that in my background.”)

One decision was to call for a “flaps five” configuration: Having sensed the extra drag and seen “chunks” missing from the wing, she figured that a flaps-five approach, which was “not something we had ever practiced,” would provide the most lift for the least drag, and get the still-overweight-for-landing airplane “below tire blowing speed” at the speed to be used for that configuration of the wing’s slats and flaps.

Most important, it would avoid moving the wing “any more than I needed to.” (The CVR transcript notes that Ellisor sought to verify the unfamiliar setting, asking, “How about just fifteen? It's something we know.”)

“This was a one-shot landing,” Shults recalled, noting that the 737 was flying with severed fuel and hydraulic lines and an engine cowling that “had peeled back a little bit like a banana so you get this barn-door-in-a-hurricane effect under your wing.”

The pilots had discovered that the more they decelerated, the less power they could use. With no time to use a computer to solve for a landing speed, Shults said, she decided on a 180-knot pattern speed for the flaps five configuration, and landing at 165 knots.

She also made what she described as an “against procedure decision not to use autobrakes,” reasoning that using them could slam the passengers into the seats in front of them—unnecessary because the airplane would be rolling to the end of the runway anyway.

That was “a command decision,” she said; using the autobrakes “didn’t fit our specific flight.”

Shults also urges GA pilots to hand-fly their aircraft frequently, despite any automation aboard, citing accidents that happened partly because “the pilots involved were hesitant to rely on their own ability.”

That’s not to say that technology can’t help: Shults had asked Ellisor to put the aircraft’s head-up display on a visual setting, giving her a three-degree glideslope and a “velocity vector on where we were landing” as she hand-flew the airplane toward the runway.

In the aviate-navigate-communicate trilogy of emergency management, communicating is the third priority. From student pilots to airline captains, all pilots train to keep that hierarchy in mind so communicating won’t tax the pilot’s workload.

Shults prioritized; the CVR reveals that when SWA1380 was being handed off to approach control, she acknowledged the frequency change and added, “We need a single channel no more channel switching.”

For the next few minutes, the flight remained on that frequency while maneuvering into position for landing.

One more frequency change was required for contacting the control tower, and there was momentary uncertainty—resolved less than two minutes before touchdown—whether the flight would land on 12,000-foot-long-by-200-foot-wide Runway 27L or 9,500-by-150-foot Runway 27R (reported winds were 280 at 19 knots gusting to 25).

In our phone interview, she confided having had mixed feelings about going back and listening to the CVR, adding that she had learned that some pilots simply don’t.

On one hand, she said, she thought listening would help “fill in some of the questions we had.” On the other hand, “I won’t enjoy hearing that boom and then that roar for twenty-plus minutes that went on.”

As it turned out, the recording was geared more to picking up human voices than background sounds.

“We didn’t have to hear the roar,” she said.

Dan Namowitz has been writing for AOPA in a variety of capacities since 1991. He has been a flight instructor since 1990 and is a 35-year AOPA member.
Go to Dan Namowitz's Profile
Topics: Accident, Emergency, People