Get the app Get the app
Already a member? Please login below for an enhanced experience. Not a member? Join today
News & Media ADS-B: Saving the day

On December 20, 2019, Kurt Bohlsen was VFR northbound at 6,500 feet above Massachusetts’ Berkshire Mountains, 45 minutes into a flight from Long Island, New York, to Rutland, Vermont. The engine of the 1969 Piper PA–32-260 Cherokee Six in which he was a partner had only 33 hours on it when it quit. 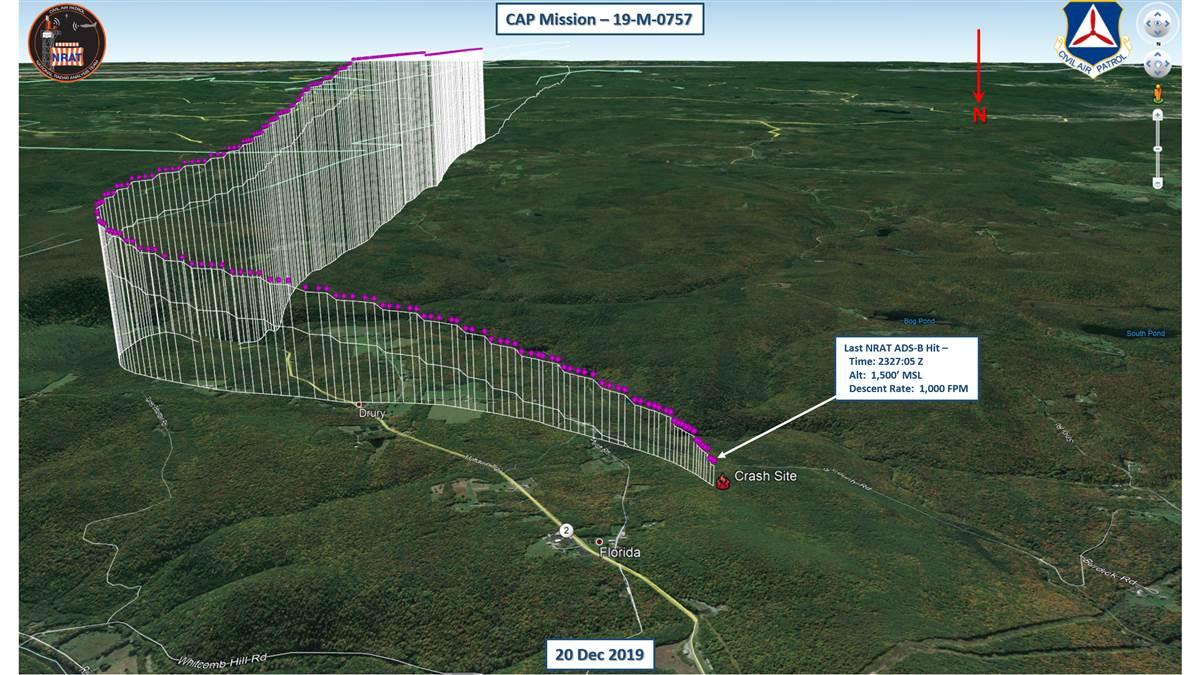 “It takes about 30 seconds for your brain to click that this is really happening,” Bohlsen said. The instrument-rated pilot was flying VFR with flight following. ATC suggested an airport east of his course, then offered one to the west that was closer. Bohlsen looked outside and realized there was a mountain between him and that airport. “If I keep working this checklist, I’m going to look up and go right into the mountain,” he said, putting it aside. “That was a lifesaving decision. I started looking around for a place to land.”

He aimed for the top of a foothill in the Florida State Forest and set up to land downhill, carrying a little extra airspeed. “I didn’t want to stall. That was the big thing.”

The Piper slowed as he hit the tops of several trees. “I never hit anything so hard in my life,” he said. “The plane broke into six pieces. I never lost consciousness.” It was about 7:40 p.m.

Bohlsen, his 15-year-old daughter, her nanny, and a dog avoided serious injury. But they had another problem—it was about 7 degrees Fahrenheit, he recalled; his survival gear was soaked in avgas; and “there’s just no cell service.” Then his daughter’s Apple watch rang—her phone was farther uphill, in the airplane, and they used the watch to call 911. “We could hear emergency vehicles around us.”

Meanwhile, the FAA had contacted the Air Force Rescue Coordination Center (AFRCC), which activated the Civil Air Patrol’s National Radar Analysis Team (NRAT). The all-volunteer team performs radar forensics on missing aircraft. Within four minutes, it had plotted the aircraft’s last ADS-B position at 50 feet agl, said CAP Lt. Col. Mark Young, NRAT commander. One minute later, that had been relayed to local authorities—who, logs indicate, were unsure of the phone’s location. So CAP’s cellphone team pinged the phone, getting coordinates that matched the ADS-B data. “First responders were working toward our coordinates and it all came together about the same time,” Young explained.

“It wasn’t 20 minutes later people came out of the woods with flashlights,” Bohlsen said. “They were the happiest people I ever saw. They saved us.” The survivors walked out about a mile; Bohlsen’s daughter had a back injury that required surgery and a hospital stay. “She’s made a full recovery,” he said.

Three days later Bohlsen flew back to the area to retrieve possessions from the wreckage; the local fire chief drove him to the crash site. “We had to wait a few days to celebrate Christmas.”

The FAA has long touted improved search and rescue as a benefit of ADS-B, which can provide accurate and timely last-reported positions. Bohlsen’s is not the first ADS-B save. And the Civil Air Patrol’s NRAT has expanded its capabilities beyond FAA radar and ADS-B data. It can access Aireon’s space-based ADS-B information as well as data from terrestrial sources such as FlightAware and FlightRadar 24—which prove especially helpful in areas where FAA data is not available, Young said. 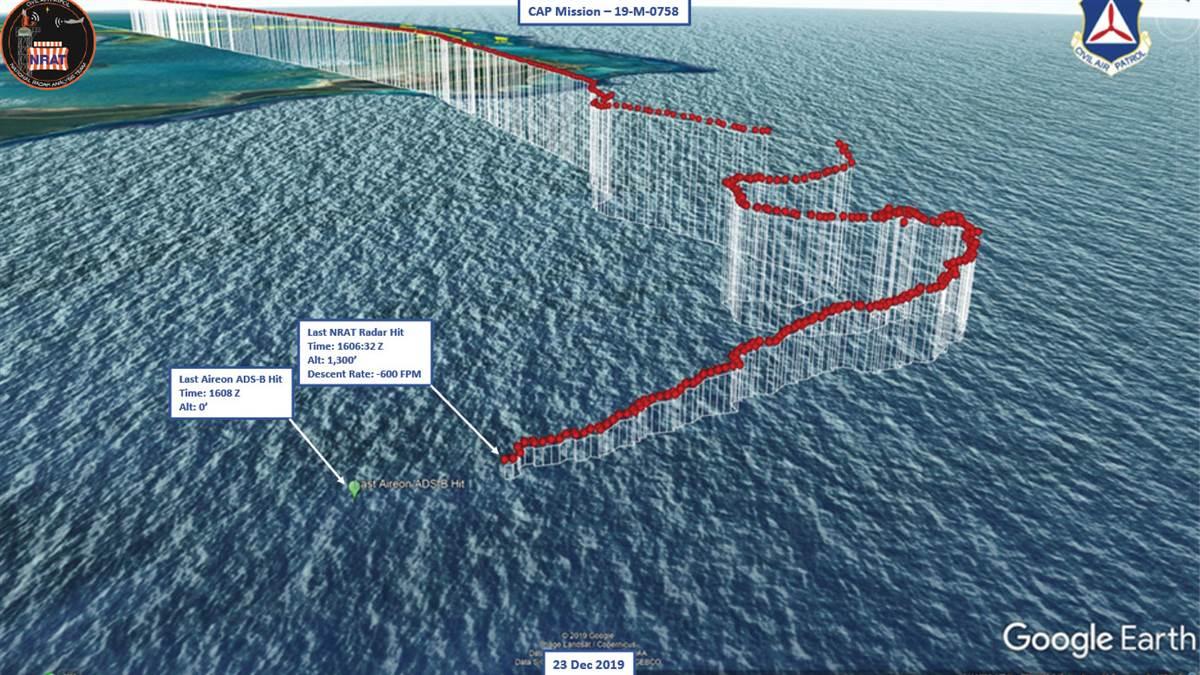 When a Cessna 210 ditched in the Bahamas, ADS-B data tracked it to 1,300 feet msl. The CAP team then looked to Aireon space-based ADS-B, which showed the airplane at zero feet msl. A Coast Guard helicopter rescued the pilot 55 meters from that surface plot—which is the same distance calculations indicated he would drift in the interim.

Ditching in the Bahamas

Three days later, on December 23, Don Hinkel was flying over the Bahamas when the engine of his 1981 Cessna P210N failed. It would not restart, said Hinkel, who lives in the U.S. Virgin Islands and regularly flies back and forth to Florida. “I activated an onboard ELT when I realized that I was in serious trouble at 17,000 feet. Upon ditching, I activated an EPIRB [emergency position indicating radio beacon] and left the plane with it in my hand.” He was holding the beacon when a U.S. Coast Guard helicopter picked him up more than two hours later. The Cessna also was equipped with ADS-B Out. The airplane floated about 15 minutes, but the raft he carried got stuck on egress. “I must have torn it pulling it out of the cabin,” he said.

After the Royal Bahamas Defence Force requested Coast Guard assistance, the NRAT tracked the Cessna down to 1,300 feet msl using data from the Grand Turk air traffic control radar, supplementing it with Aireon space-based ADS-B that showed the airplane at zero feet msl. The Cessna ditched at 16:08:25Z; NRAT received alert notification at 17:02, and by 17:08 had estimated a ditching location and asked that the Coast Guard be launched. By 17:45Z Young had Aireon data showing an altitude of zero msl. “That told me exactly where the crash was,” he said.

“His life raft had already sunk when they got to him and only a single lobe of his life preserver was functioning. The PLB saved his life for sure.”

Aireon said it makes its space-based ADS-B data available, at no charge, in emergencies to air navigation service providers, search and rescue organizations, commercial aircraft operators, and regulators through its Aircraft Locating and Emergency Response Tracking. Aireon ALERT is operated by the Irish Aviation Authority (IAA). Qualified parties can apply online (aireonalert.com) and once vetted and registered, can call an operator and request a search by ADS-B flight ID or by the aircraft’s 24-bit ICAO address, said Sean Patrick, IAA’s general manager of oceanic services. “They’ll get an immediate return of the last position of the aircraft,” including latitude, longitude, altitude, and time. Follow-up includes a graphical depiction of the last 15 minutes of flight, with headings and altitudes—and every ADS-B return during the last minute, which typically is 5- to 8-second updates. This happens within about two minutes of the initial call, he said.

Aireon ALERT’s trace showed a difference of 2 to 2.5 miles between the last radar position and the satellite ADS-B position, said Patrick, who later was told the pilot was located 55 meters from there. “We’re really pleased. The whole reason we did this is to save lives. We’re delighted with the outcome.”

The Coast Guard uses all available information to best determine the location of a person in distress, said Cmdr. Erin Boyle, the U.S. Coast Guard’s SARSAT officer. “In this case the Rescue Coordination Center could have received all four pieces of information to best guide SAR forces. The combination of these resources could have been used to provide the aircrew with a best location of the downed pilot.”

Coast Guard helicopters can home in on both 406 and 121.5 MHz signals, leading the aircrew right to the beacon, she said. “This is why we encourage EPIRBs, PLBs, and ELTs because they work globally and provide SAR forces a location and a means to home into the precise position.”

The Clearwater, Florida-based Jayhawk crew that rescued Hinkel was deployed to Andros Island, said Lt. j.g. John Martin of the U.S. Coast Guard Air Station Clearwater public affairs office. “They first picked up the survivor’s 406 MHz beacon emitting from his PLB and used that to track towards him with the direction finder. Once they were closer, they began picking up the continuous 121.5 signal and ultimately used that to locate the pilot.” The direction finder sends bearing information to the RMI needle on the helicopter’s cockpit display.

“The pilot helped himself immensely by having a PLB on his person when he ditched,” Martin said. “Visually spotting a single person in the ocean is extremely difficult on the best of days, and having that 406/121.5 signal makes it infinitely easier. His life raft had already sunk when they got to him and only a single lobe of his life preserver was functioning. The PLB saved his life for sure.”

The NRAT’s first ADS-B save was August 18, 2019, about 1:30 p.m. Central Daylight Time. A 1975 Cessna 206 on floats struck water near Hopedale, Louisiana, in deteriorating weather returning from a fishing location, according to the NTSB preliminary report. The pilot of another airplane reported losing radio contact with the Cessna.

Young said that four minutes after activation, an NRAT member had retrieved ADS-B data and passed it to AFRCC; eight minutes later, a second team member confirmed the location—noting the aircraft was only 150 feet above the water. The Coast Guard retrieved the pilot and both passengers; the passengers survived.

Because of its accuracy and coverage, Young anticipates a growing number of “ADS-B saves.” Legacy radar becomes less accurate as distance from the antenna increases, and radar sweeps take 6 to 12 seconds, he explained—while ADS-B is accurate to within 2 or 3 meters, and transmits every second. \

“There are multiple ADS-B sites and the infrastructure to maintain an ADS-B site is a lot less. That gives you much greater coverage,” he said. “For example, in central and western Colorado we have ADS-B sites on mountaintops all over the place. Previously we only had radar coverage above around 10,000 feet. That provides us much better coverage with ADS-B.” NRAT also has agreements with FlightAware and FlightRadar24 to receive data from their terrestrial receivers, and Young has begun working with uAvionix on its dual-band terrestrial receiver. He is using those technologies to fill gaps in existing coverage.

The Aireon satellite data is not always helpful with belly-mounted transponder antennas, and it only includes 1090ES data. “If someone is going to do an [ADS-B] installation in the future and wants to increase their chances of being found, I suggest they go with 1090ES, ideally with antenna diversity,” Young said.

NRAT got its start in 1997, when an Air Force A–10 went down in Colorado and was missing for three weeks. CAP Capt. Guy Loughridge, a team lead, wrote software for tactical fire mapping; he adapted available data, made it 3-D, and superimposed it on a topographical map—finding the A–10. The team has completed about 1,000 missions and members are approaching 100,000 hours programming their software. In 2003, notification to location determination took six to eight hours. Last year it took Young’s team 20 minutes to run a data request; now it’s four to five seconds. “I’ve got the best experts in the world at radar forensics and programming,” he said. 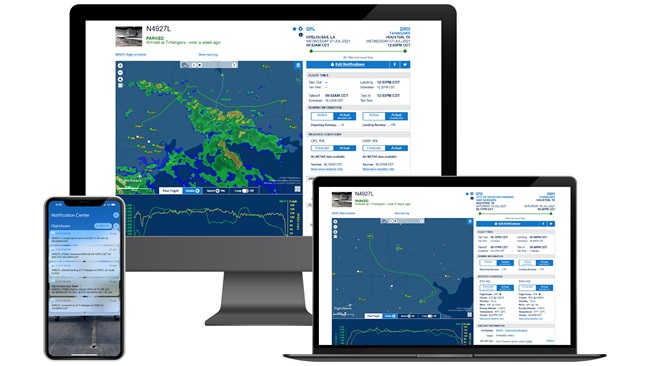 Lack of diversity did not impede uAvionix tailBeaconX