Get the app Get the app
Get the latest news on coronavirus impacts on general aviation, including what AOPA is doing to protect GA, event cancellations, advice for pilots to protect themselves, and more. Read More
Already a member? Please login below for an enhanced experience. Not a member? Join today
News & Media Simulated clouds in real aircraft

Instrument flying is not dangerous unless clouds catch the pilot unprepared. Unexpected or inadvertent entry into instrument conditions is a persistent and notoriously deadly problem that has caused countless tragedies. A Wisconsin National Guard helicopter pilot with a degree in aeronautical engineering created a simple device that could dramatically improve training, priming every pilot who uses it to transition without hesitation to basic attitude instrument control. 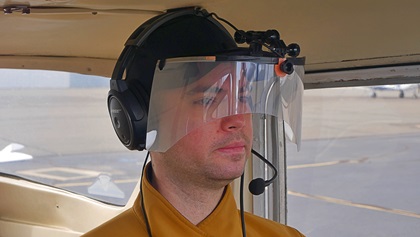 The script is far too familiar: Clouds of water vapor in the sky or clouds of dust on the ground kicked up by rotors obscure the view outside. Within seconds, one of two things will happen: The pilot will focus exclusively on instruments displaying attitude, airspeed, vertical speed, direction, turn coordination, and altitude (not necessarily in that order, but always in combination), or the pilot will fall victim to illusions and lose control of the aircraft with predictably fatal results.

When the NTSB unanimously concluded in February that the helicopter crash on January 26, 2020, that killed basketball legend Kobe Bryant and eight other people was caused by “the pilot’s decision to continue flight under visual flight rules into instrument meteorological conditions,” the board paired that determination with a few recommendations. Among these, the safety board called on the FAA to formalize a search for technology that could help pilots better prepare to avoid this all-too-familiar catastrophe.

Nick Sinopoli was ahead of the curve on that, having worked since 2014 to create Icarus, a view-limiting device that attaches to a helmet or visor, and features a face shield with variable opacity that is under another pilot's control. The face shield is coated with polymer-dispersed liquid-crystal film, and a connected app allows an instructor or safety pilot to dial in visibility ranging from clear to zero. Unlike hoods or Foggles that are usually donned in flight, Icarus can be donned before flight, allowing time for a pilot to forget they are wearing it, and enabling a flight instructor to make the IMC experience a more realistic surprise, an element that traditional view-limiting devices cannot replicate.

Sinopoli, who earned a bachelor’s degree in aeronautical and astronautical engineering from Purdue University in 2012, was inspired to create Icarus by many losses, including a friend, Rusty Allen, who introduced him to helicopters and was killed in a 2012 crash caused by spatial disorientation following unexpected loss of visual references. Sinopoli’s father loved the music of Stevie Ray Vaughan so much that he moved the family to Austin, Texas, in 1982, to be at the source of the music. Vaughan was killed in a 1990 helicopter crash in Wisconsin, with the same root cause that would later claim the life of Bryant, and many others.

“I’m ready for it to be out there,” Sinopoli said of his creation, patented in 2016 and now commencing its first production run. He was interviewed by telephone while on the road demonstrating Icarus for potential customers including flight schools and media. “I’m tired of seeing accidents.” 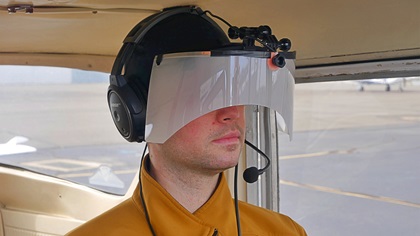 Sinopoli is marketing his new, technological approach to spatial disorientation training with a combination of old-fashioned shoe leather as an inventor-turned-traveling-salesman, and a website where he offers an airplane version for $1,000, and a helicopter variant for $1,500. The units are distinguished most obviously by the shape of the visor, crafted to leave the instrument panel in view but more effectively prevent “peeking,” which has proved a nearly irresistible temptation since the hood was invented. Purdue and Ohio State University both contributed to product development and initial testing, Sinopoli said, and the FAA has also tested the device. The warm reception has extended to the press, bloggers, and Sinopoli’s alma mater, which celebrated the “mission to save lives” on the university website.

Sinopoli said that while FAA staff were enthusiastic, a mandate to use Icarus is unlikely. He expects the insurance industry will help drive demand by offering discounts to pilots trained with Icarus, though that discussion remains preliminary. Sinopoli has been racking up miles and nights in hotels making the same case to fellow pilots.

“Right now, the name of the game is scaling correctly,” Sinopoli said. He has about 15 firm orders and plans an initial production run of 30 units in the coming weeks. “After that, the next goal is to sell 100 of them. My big focus is scaling properly. We are talking to some of the bigger schools.”

Scaling production up will bring the price down, eventually. “We’re going to try and hit a general aviation price of about $500 for a base device.”

Sinopoli said he made a deliberate decision to focus on GA, rather than military or large commercial customers, even though he remains active as a Wisconsin National Guard helicopter pilot and will be happy to see any kind of pilot training with Icarus. (As luck would have it, his duty rotation conflicts with the Sun ‘n Fun Aerospace Expo in Lakeland, Florida, this month, but Sinopoli said he does plan to exhibit Icarus at EAA AirVenture in Oshkosh, Wisconsin, in July.)

The young pilot-engineer said he is more interested in maximizing adoption, preventing future tragedies and losses he has experienced firsthand, than he is in profit.

“I was that kid delivering pizza to get hours in a Cessna 172,” Sinopoli said. “I don’t want that kid to not get Icarus.”