Watch the weather close in (from a safe seat)

Train as we might, there is no substitute for experiencing firsthand the insidious degradation of flight visibility, which is why flight instructor and aeronautics professor Chris Johnson created a simulation add-on that takes weather to the next level. 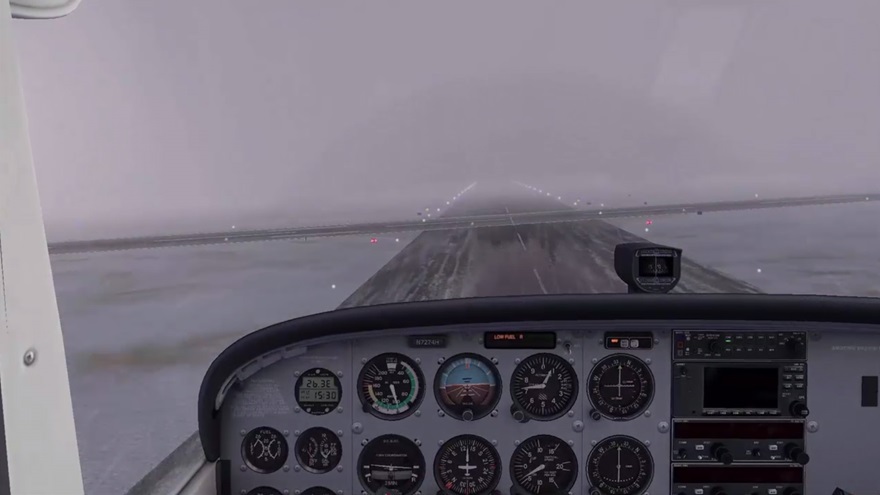 Johnson, a U.S. Air Force veteran whose research on human factors and systems engineering has been funded by the Pentagon and the FAA, has long sought solutions and tools to prevent weather-related accidents. Part of that ongoing mission involves improving the realism of weather simulation, and a newly released digital product called ClimaDrive is one of the fruits of his labors, Johnson recalled in a November phone conversation. Now preparing to depart the University of Wisconsin-Madison, where he earned his doctorate in industrial and systems engineering in 2012, followed by postdoctoral work and research, Johnson announced December 19 on LinkedIn that he will soon join the faculty of Embry-Riddle Aeronautical University.

Meanwhile, the longtime CFI who created Pilot Training System, a free online ground school for both private pilot and remote pilot students, is offering a free trial of an add-on tool that has already helped the NTSB investigate weather-related accidents. ClimaDrive, newly available to the public, is actually an add-on to an add-on, designed to augment the weather simulation of ActiveSky, which was developed as a third-party weather simulation engine for flight simulators including Microsoft Flight Simulator X (the 2006 release that is commonly abbreviated FSX), and Lockheed Martin's Prepar3D.

ClimaDrive dials up the ActiveSky realism by refining the weather presentation to model actual events, drawing from a database of National Oceanic and Atmospheric Administration continental U.S. observations that dates to 2015. While the resulting simulation may not match precisely, cloud-for-cloud, the actual conditions found at a given location on a given date, they will likely be close.

“There’s a ton of interpolation between point data,” Johnson conceded, noting that the miles between ground stations and even bigger swaths of unmonitored action in the upper atmosphere forced his programming team to "make our best guess" on those unmeasured spaces. That said, in-flight weather realism is only part of what ClimaDrive was designed to offer pilots.

The preflight briefing is at the heart of what makes ClimaDrive a teaching tool for CFIs, as well as a tool for conscientious certificated pilots seeking to experience specific weather events in perfect safety—whether the weather in question happened at the pilot's preferred airport, or not. Algorithms can cull through terabytes of data to find particularly dynamic or dangerous conditions, anything from raging wind (shear) to lowering ceilings, to create a scenario with the worst weather any earthbound pilot might want.

“We’ll go find a day where Mother Nature presented a challenge,” Johnson explained. “You get to bring historical weather into airspace that you know.”

“We’ll give you access to all of the weather reports that you would have had on that day,” Johnson said. A detailed weather briefing from ClimaDrive presents pilots with the same information that informs every go/no-go decision required before actual flight, and simulation affords the opportunity to make the wrong call with impunity, then try to fly it on the computer.

More practice on this clearly would not hurt the pilot community: Weather-related accidents may not be as common as they once were, but they have resisted various advances in technology to remain among the leading causes of aircraft accidents, and they are far more likely than most aircraft accidents to be fatal. The AOPA Air Safety Institute’s Joseph T. Nall Report notes that this trend continued in 2019 (the most recent year for which a nearly complete dataset is available), when 34 of 1,169 noncommercial fixed-wing aircraft accidents, of any severity, were attributed to weather. Weather-related accidents accounted for a much larger share of fatal noncommercial fixed-wing aircraft crashes that year: 30 of 212.

Most of those fatal accidents, including 18 of 30 fatal weather-related accidents, involved continued VFR flight into instrument meteorological conditions. It is no coincidence that Johnson's FAA-funded academic research included investigations of accidents involving this very scenario, including the January 26, 2020, helicopter crash that killed nine people including NBA legend Kobe Bryant, and the 1999 crash that killed three people including John F. Kennedy Jr. Both involved declining visibility and spatial disorientation.

Weather products, including forecasts and radar images, never age well—except in the sense of being valuable teaching tools. By the time a radar image is even a few minutes old, the delta between predicted and actual conditions increases. By fine-tuning simulation, pilots can experience a marginal forecast that turns to something truly awful between briefing and engine start, or later. Things can get bad quickly, or the simulation pilot can experience the slow-boiling-frog scenario in which seemingly innocuous weather degrades slowly to treacherous conditions.

“Pilots in training, they rarely get challenged by real-time weather,” Johnson said. By extending the scenario from briefing into simulated flight, using ActiveSky and a compatible flight simulator, pilots—be they students or experienced professionals—can look forward to guaranteed challenges, and find out firsthand how quickly a horizon can disappear on a hazy day off the Cape Cod coast.

“For years, I have used ClimaDrive to improve the realism of flight simulation and expose weaknesses in flight training among certificated pilots, and I recently began using it to train computer-perception systems that serve as the foundation of artificially intelligent robotic vehicles,” Johnson said in a December 20 press release announcing free 30-day ClimaDrive trials are available online. “I decided to commercialize ClimaDrive after several simulation experts and many simulation users, including many of my experimental subjects, attested to its ability to improve training, and I’m excited to learn what my users think of the system.”