Get the app Get the app
Already a member? Please login below for an enhanced experience. Not a member? Join today
News & Media From the editor

Looking to the future

The NBAA-BACE (National Business Aviation Association-Business Aviation Convention and Exhibition) is the turbine world's main gathering, usually held every October in either Orlando or Las Vegas. 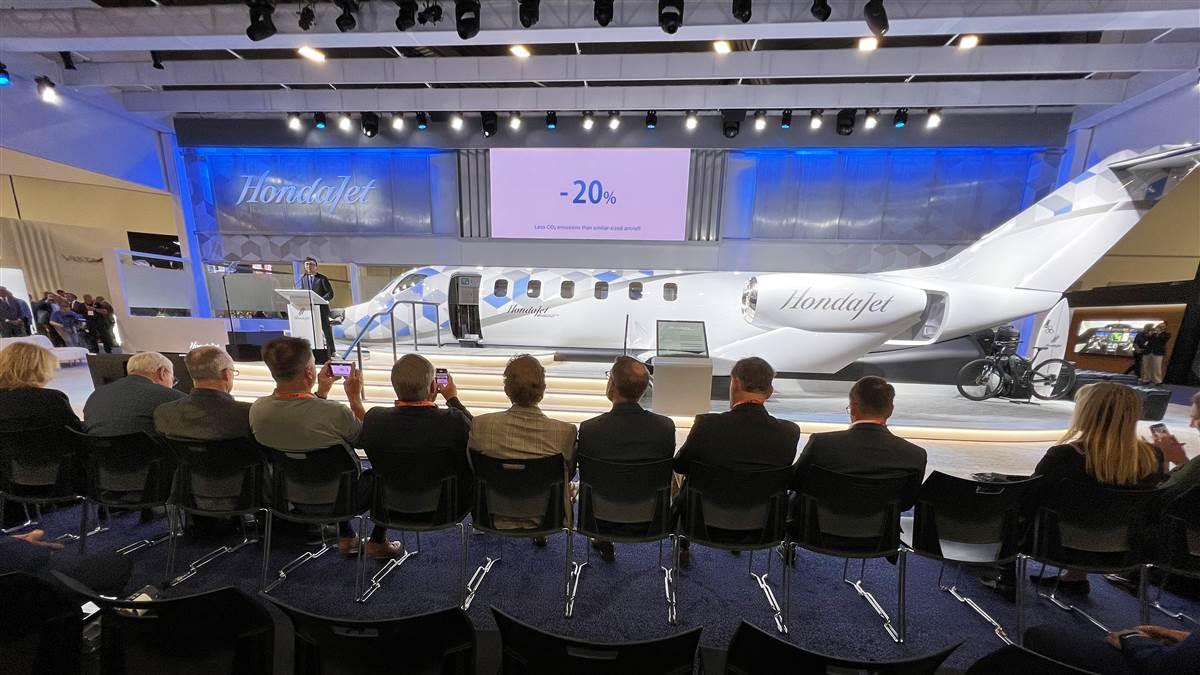 At an NBAA-BACE news conference, HondaJet founding president and CEO Michimasa Fujino discusses the company’s latest design, the HondaJet 2600 Concept. Behind him, a mockup of the cockpit and cabin awaits inspection by eager attendees.

This year it was Las Vegas’s turn, after a one-year pause to ride out the worst of the COVID-19 pandemic. The brand-new West Hall of the Las Vegas Convention Center had the exhibit hall and conference rooms. The static display was at the Henderson Executive Airport a few miles away.

The convention can be relied upon for introductions of new airplanes, announcements of huge sales orders, and extravagant displays. Not so this year. Attendance appeared to be down—no numbers had been published as this goes to press—and there were far fewer press conferences than usual. As for new airplane announcements, there was only one: the HondaJet 2600 Concept, an 11-seater that can do 450 knots, fly 2,625 nautical miles, and cruise as high as 47,000 feet (see "Briefing: News from NBAA,” p. 48).

And that was it. Sure, there were new interior mockups at the static (for the Falcon 10X, Bombardier 3500, Beechcraft Denali, and the Citations M2 and XLS Gen2 models), and mods (Tamarack wing extensions for Beechcraft King Airs 200 and 350, Blackhawk engine upgrades for the Pilatus PC–12), plus the new Tecnam P2012—a multi-role piston twin—that kicked off its U.S. tour at the show. But nothing at all like the spectacle that attended Gulfstream’s over-the-top, stage-smoke-and-searchlights reveal of the Gulfstream G700 at the 2019 NBAA convention. People were still talking about it, which made Gulfstream’s 2021 no-show all the more conspicuous.

Gulfstream did reveal two new models—the G400 and G800—but via livestream a week or so before NBAA. The video had the same feel as the 2019 G700 event but was much shorter and didn’t have the visceral impact of its predecessor, which some believed must have set Gulfstream back some $5 million—or more.

No, this year’s convention had a different focus. It looked to the future with a sense of mission. In one keynote speech, NBAA pledged that business aviation is committing the industry to reaching net-zero emissions by 2050. “We will be carbon-neutral by 2050,” said NBAA President and CEO Ed Bolen. This is in keeping with goals set by the commercial airline industry, and it’s an ambitious promise given the current scarce availability and high prices of sustainable aviation fuel(SAF), or biofuels. Pete Bunce, president and CEO of the General Aviation Manufacturers Association, added that business aviation is on track to reach 2 percent annual efficiency gains over the next decade alone.

NBAA held two other keynote events that focused on advanced air mobility (AAM), the emerging segment of aviation that concerns itself with eco-friendly, battery-electric powered (or hybrid internal combustion engines combined with electric power) aircraft. Speaking of the challenges of lithium battery power, David Rottblatt of Embraer’s Eve eVTOL initiative said that “we’ll conquer this, too, just like early aviation met its challenges.” Dan Dalton of Wisk, another eVTOL manufacturer, said that today’s airports must get ready to accommodate eVTOLs—starting with educating FBOs. “This is where we’re most likely to land and take off,” he said. “So, we have to explain to them that eVTOLs are not like helicopters. This may take years--and remember that we need to build our workforces as well.”

Rottblatt sees autonomous flight as the answer to dealing with flight in instrument meteorological conditions and other adverse weather. Dalton wondered if the airspace was ready for the intra-urban flight requirements of this new class of aircraft and suggested new flight rules would be needed for AAM missions. Joby Aviation’s Eric Allison said that his company believes in gaining experience with piloted flight before committing to autonomous operations.

“AAM is real, and it’s farther along than people realize,” Allison said. “Get involved,” Rottblatt said. “Share your knowledge with colleagues and friends, because the public knows very little about this movement.” Dalton summed things up: “This is a good-news story. There are 200 to 500 designs out there, so get involved now or AAM’s adoption will be farther away.”

These aren’t the kind of discussions you’d have heard at previous NBAA conventions. It’s a sign that the organization is looking forward, adding new technologies to its constituency, and demonstrating a concern for the environment. There were only a handful of scale-model AAM designs on the exhibit floor this year, but that could easily change in the years to come. I’m betting that in a couple more years, full-scale, operational AAMs will take their places on the static display lines, right next to the Citations, Phenoms, Globals, Falcons, and, yes, the G400 and G800. When a usually staid NBAA acknowledges AAM, you know it’s arrived.