Get the app Get the app
Get the latest news on coronavirus impacts on general aviation, including what AOPA is doing to protect GA, event cancellations, advice for pilots to protect themselves, and more. Read More
Already a member? Please login below for an enhanced experience. Not a member? Join today
News & Media Learjet to end production run

Production of the Learjet—an iconic name and an iconic airplane—will come to an end in the fourth quarter of 2021, according to current owner Bombardier Inc. That’s when the last of the most recent model, the Learjet 75, will leave the Learjet manufacturing facility at Wichita’s Dwight D. Eisenhower Airport. The news was announced during Bombardier’s latest quarterly earnings report. 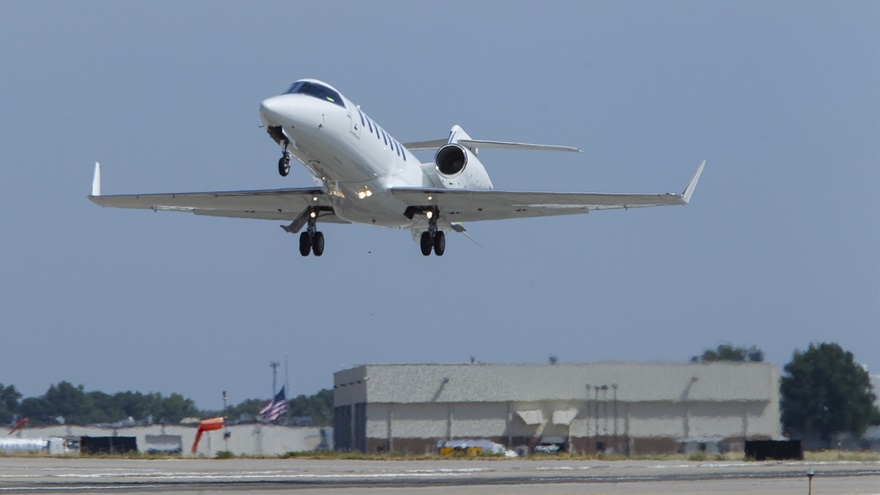 This Learjet 40, a shorter version of the Learjet 45, was built by Bombardier until 2013. The Learjet 40/45 series was the predecessor of the Learjet 70/75 models, the last in the iconic line of business jets. Photo by Mike Fizer.

The original Lear Jet design was the first purpose-built, personal business jet. Flamboyant inventor, engineer, and visionary William P. “Bill” Lear came up with the idea of a high-performance, personal-sized twinjet in 1962, when he used a Swiss fighter—the P–16—as the inspiration for the first Lear Jets. The P–16’s wing and tip tank designs were adopted with few changes. Together with the sleek nose; T-tail; and racy, low-slung fuselage, the then-new Lear Jet models 23, 24, and 25 immediately captured both imaginations and market share. It was the airplane of choice for rock stars, glitterati, and other arrivistes.

Through the years, Lear’s design grew. The 28, 35, and 55 models followed in the years spanning 1977 to 1985. They gathered speed and time-to-climb records along the way.

But if Lear was a conceptual and marketing genius, his company was under perpetual financial stress, and went through major ownership changes. In 1964 the renamed company—Lear Jet Corp.—went public.

In 1990, Canada’s Bombardier bought Learjet and began making the Learjet 45 and 60 series of larger-cabin derivatives. Manufacturing was returned to Wichita, and a new all-composite Learjet—the Learjet 85—was introduced in 2008. That program was canceled in 2014. Starting in 2013, less ambitious, reworked versions of the Learjet 40—the Learjets 70, 75, and 75 Liberty—were introduced. Reception was less than enthusiastic.

Most recently, Bombardier has its own troubles with delays and cost overruns in its CSeries single-aisle airliner program. It has been forced to divest itself of interests in subsidiary business units—and now, Learjet production. In the industry, this was not a surprise. However, Bombardier says it will continue to support the Learjet line.

But its focus will now be on its Challenger and Global series of midsize and large-cabin, long-range business jets.

AOPA Pilot Editor at Large
AOPA Pilot Editor at Large Tom Horne has worked at AOPA since the early 1980s. He began flying in 1975 and has an airline transport pilot and flight instructor certificates. He’s flown everything from ultralights to Gulfstreams and ferried numerous piston airplanes across the Atlantic.
Go to Thomas A. Horne's Profile
Topics: Aircraft, Turbine Aircraft, Aviation Industry