Roaring Twenties-era music plays in the background as a woman clad as an early barnstorming pilot in flight jacket, scarf, helmet, and goggles strides into view. “I am so glad to be on the ground,” she says, pushing the goggles up above her eyes. “It’s been a long flight.”

What follows is a brief and engaging video journey back into early aviation history to meet Bessie Coleman, the first woman pilot of African American and Native American descent, who earned her pilot’s license 100 years ago this June.

Bessie Elizabeth Coleman was born in Atlanta, Texas, on January 26, 1892, the tenth child of 13. Coleman—portrayed in the four-minute video (and in a longer live performance) by her real-life grandniece, Gigi Coleman-Brooms—reminisces about how her father, George Coleman, always assured her that she could do anything she dreamed of doing. 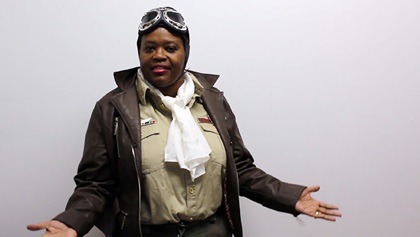 At age 6, Bessie Coleman started school, which meant walking three miles one way—a nearer school was not open to her because of segregation.

She loved school. “I was an avid reader, and I loved mathematics,” Gigi-as-Bessie Coleman says, telling the audience that as she grew up, she worked hard and saved money to attend college in Tulsa, Oklahoma. However, she could only afford one semester.

At age 23, she moved to Chicago, staying with two of her brothers and finding work as a beautician. Her brothers told her stories of their experiences in France during World War I. They teased her about what women in France were doing, informing her that “they’re even flying airplanes.”

Bessie had been pondering goals for her future; when she heard that women in France were soaring in the sky as pilots, she knew what she wanted to do.

However, “She applied to many flight schools across the country, but no school would take her because she was both African American and a woman,” notes a biography of her posted online by the National Women’s History Museum.

At the barbershop where she worked, Bessie Coleman had met newspaper publisher Robert Abbott, who encouraged her to go to France to pursue her dream of flying. She took French classes at night to get ready—and so began a legendary journey in the history of aviation.

June 15 will mark the 100th anniversary of Bessie Coleman earning her international pilot’s license issued by the Fédération Aéronautique Internationale. (Two years later, Amelia Earhart would be issued a pilot’s license by the same authority.)

The biography notes that as she gained renown at performing aerobatics, nicknames were bestowed on her such as “Brave Bessie,” “Queen Bess,” and “The Only Race Aviatrix in the World.”

Bessie Coleman’s career was cut short in Jacksonville, Florida, on April 30, 1926, when the Curtiss JN–4 Jenny she was test-flying with mechanic William Wills went out of control and crashed—the accident attributed to a loose wrench that had jammed controls.

As her centennial approaches, the nonprofit educational Bessie Coleman Aviation All-stars organization, led by Coleman-Brooms, has been planning to commemorate it with a 10-city U.S. tour—part virtual and perhaps part in-person this fall if possible because of the coronavirus pandemic—that will “land” in key places along Bessie Coleman’s journey from her birthplace in Texas to France.

The commemoration is to be chaired nationally by aviation pioneer Dr. Sheila Chamberlain, the first U.S. Army African American woman combat intelligence aviator, and former president of the South Florida Chapter of the Organization of Black Aerospace Professionals, and a Tuskegee Airmen Legacy Member.

As with so many other events during the pandemic, scheduling will depend on what libraries, airport, and museum facilities are open for presentations, the Bessie Coleman Aviation All-stars said in a Facebook post.

Coleman-Brooms said the Bessie Coleman Aviation All-stars organization plans to present 10 scholarships under its award program, plus one in each city on the tour, in partnership with local organizations, each awarded to a deserving young person “who wants to go to school for aviation.”

The commemoration furthers the group’s continuing work to inspire a new generation to embrace aviation as a career path by telling Bessie Coleman’s story.

Coleman-Brooms, who has performed as Bessie Coleman at aviation museums and other major venues including EAA AirVenture in Oshkosh, Wisconsin, was raised on stories about her grandaunt, who was honored with a commemorative stamp issued by the U.S. Postal Service on April 27, 1995.

“I am passionate in my endeavor to inform the world about the achievements of Bessie Coleman in the field of aviation,” Coleman-Brooms says in an introduction to her one-woman production, The Life of Bessie Coleman.

“Let me tell her story to challenge the minds of our young and old and encourage individuals to achieve their dreams. I also challenge them to be leaders and not followers,” she said.

Dan Namowitz has been writing for AOPA in a variety of capacities since 1991. He has been a flight instructor since 1990 and is a 35-year AOPA member.
Go to Dan Namowitz's Profile
Topics: People, Events, Career