Get the app Get the app
Get the latest news on coronavirus impacts on general aviation, including what AOPA is doing to protect GA, event cancellations, advice for pilots to protect themselves, and more. Read More
Already a member? Please login below for an enhanced experience. Not a member? Join today
News & Media WX Watch: Winter’s first strike

The northeast takes a hit

When did winter arrive this season?  For the northeast quadrant of the nation, there was little doubt. The sequence of events began on November 29, when a huge Canadian air mass descended from Ontario and Manitoba, delivering surface temperatures in the 30s to the Great Lakes states.

This was the leading edge of an upper-level trough—a U-shape, southward extension of low pressure and cold temperatures. Pilots should know what these troughs look like, because they nearly always produce lousy flying weather, and in the cold season, icing conditions. You can identify them on the 500-, 300-, and 250-millibar constant pressure charts, which are roughly equal to the pressure patterns at the 18,000-, 30,000-, and 35,000-foot levels, respectively.

Once this trough moved eastward over the Ohio Valley, its eastern flank ran into the 60-degree air that had been parked over the mid-Atlantic and southeastern states. The stage was set.

Here’s how you know. If a trough, especially a deep one like this, has a northward extension, or ridge, of high pressure to its east—and it usually does—a deep surface low is in the offing. Planning a flight? Now’s the time to start looking at the TAFs, airmets, and the GFA (Graphic Forecast for Aviation) tool on the Aviation Weather Center website for any signs of trouble. Look to the area between the trough and the ridge. That’s where any surface lows will deepen. That’s also the spot where cold and warm fronts will radiate from any centers of lowest pressure to their south and east. Needless to say, that’s also where you’ll find instrument weather, icing conditions, turbulence, shearing winds aloft, and thunderstorms.

Why is it that strong winds in the flight levels create lows at the surface? It gets complicated, but simply put, there’s a huge tug of war going on aloft. You may see tightly packed height contours on, say, a 300-millibar chart and assume that wind speeds aloft are very high—and you’d be right. Sometimes they rise well above 100 knots in jet stream cores. But the winds aren’t always moving at exactly the same speed. Low pressure pulls air toward it, then relaxes and lets air move away, so the motions are more like slugs of high-speed air speeding up and slowing down. And where air parcels slow down, they create divergent airflows aloft.

Nature hates a vacuum, so divergence aloft means that air near the surface must converge to compensate. Because converging air at the surface has nowhere to go but up, this produces the lifting forces that ultimately create surface lows and their fronts. That’s exactly what happened over the mid-Atlantic and southeast states on November 30.

The surface lows (there were a pair) were over southern Virginia and the Chesapeake Bay. An especially strong north-south cold front ran all the way to Florida, and a pair of warm fronts extended into the Atlantic Ocean. There were severe thunderstorms ahead of that cold front, fed by a 70-knot “warm conveyor belt” of southerly winds. Directional and speed shear—changes of wind direction and velocity with altitude—set up enough rotation that tornado watches were issued. Two tornadoes touched down in Maryland, and one in eastern Pennsylvania, and there were widespread damaging winds and power outages.

But wait, there’s more. What’s known as a “conveyor belt” of cold air aloft wrapped around the surface lows and dumped snow in an arc ranging from New England to Ohio, and down the Appalachian Mountains. This wraparound snow and other precipitation is common in many well-developed low-pressure systems. For many, it was the first snow of the season. As you might suspect, airmets for icing and instrument meteorological conditions went into effect from Michigan to Maine, and as far south as eastern Tennessee. Although the National Weather Service doesn’t give hurricane-style names to winter storm systems, The Weather Channel does. It called this storm Dane.

One week later, the mid-Atlantic and northeast states experienced another winter storm—dubbed Eartha—but this one was a nor’easter that began in the Gulf of Mexico. It may seem counterintuitive to have a snowstorm with origins in such sunny latitudes, but with nor’easters—so called because of their strong winds out of the northeast—it’s common. Once they form, they track up the eastern United States.

The Cape Hatteras area is another prime breeding ground for nor’easters. Other winter systems include North Pacific lows that come ashore in the Pacific Northwest and those that develop along the lee slopes of the Rockies. We’re talking about major storms caused by upper-air dynamics here, not smaller events caused by more mechanical forces, such as lake-effect and orographically induced snows.

Though the major types of winter storms may come from different geographies, the dynamics are similar. A trough aloft generates jet stream winds, which cause lifting at the surface; fronts develop; and their rising motions create clouds with supercooled droplets and their associated icing conditions.

It’s no picnic near the surface, either, with low ceilings and visibilities wherever there’s a tight temperature-dew point spread. Those conditions can happen any time of year, but where freezing temperatures exist you may get to see precipitation in all its forms: fog, freezing fog, rain, freezing rain, freezing drizzle, snow, or snow pellets (also called graupel). On cloud-free nights, you may even arrive at the airport to find a nice layer of frost on the airplane. 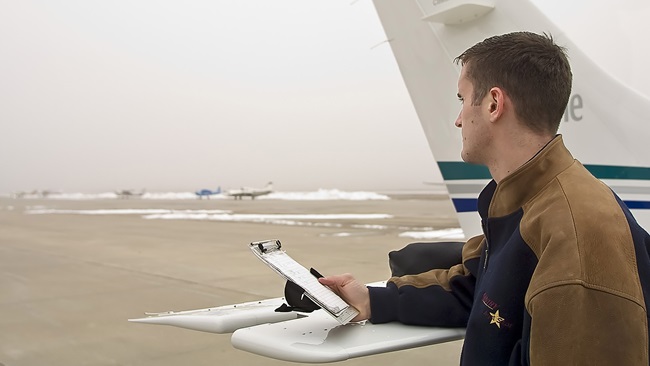 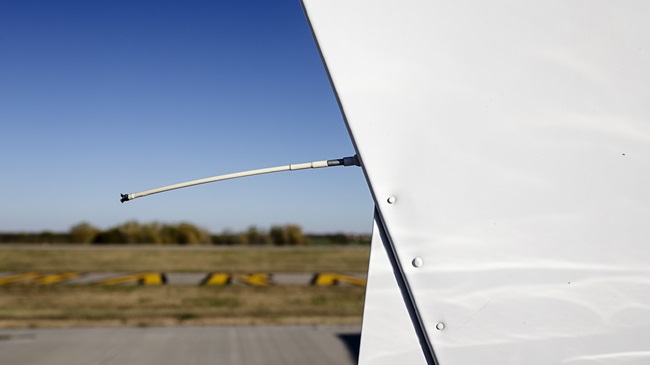 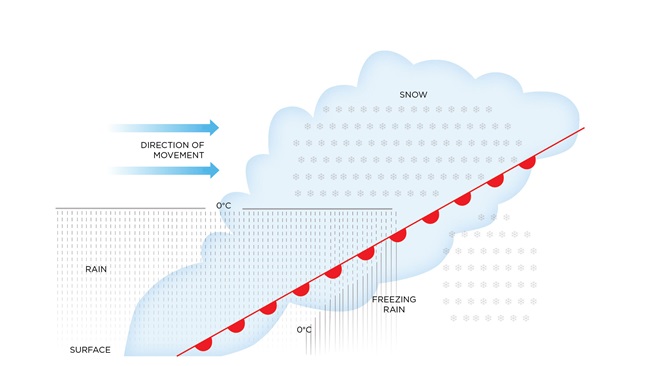