Get the app Get the app
Already a member? Please login below for an enhanced experience. Not a member? Join today
News & Media New Cirrus Vision Jet model includes better takeoff WiFi

Cirrus Aircraft’s latest upgrades to the SF50 Vision Jet provide more thrust for takeoff and a way to brag about it to your friends in flight with a new cellular-based internet Wi-Fi system. The Vision Jet G2+ was announced July 20.

Most significant is a software change to the full-authority digital engine control (FADEC) that extends the amount of time the Williams International FJ33 can maintain higher takeoff and climb power settings by up to 5 minutes. The change improves runway performance between 4 and 20 percent, according to Matt Bergwall, director of the Vision Jet product line. The improvement is most notable at hot and high airports, he reports. For example, because of the reduced runway required, a pilot leaving Santa Monica Municipal Airport in California or Henderson Executive Airport in Nevada can take about an extra 500 pounds of payload in the summer. Or in the Northeast, about any 4,000-foot runway is an option for the G2+ in the summer when departing at the max takeoff weight of 6,000 pounds. Previously, depending on temperature and obstacles, some such runways were off limits to the single-engine jet.

A flight departing Santa Fe, New Mexico, on a 31-degree Celsius day at MTOW with a 10-knot headwind will use about 3,000 feet of runway compared to the current book performance of 4,100 feet, according to Cirrus.

Our demonstration flights on a hot June day out of Frederick Municipal Airport in Maryland at 309 feet msl were not so dramatic, but the G2+ definitely left the ground more quickly than earlier models during flights from the same runway.

The takeoff procedures are the same. The pilot simply advances the thrust lever to the takeoff position and the FADEC does the rest. If the pilot doesn’t reduce the thrust to the Climb setting within two minutes, an Advisory message will appear on the avionics display. After five minutes, an Alert message is activated.

While the takeoff improvement is standard on the G2+, the new Wi-Fi system is optional. The Wi-Fi relies on the Gogo Avance L3 system’s airborne cellular network to deliver LTE-level internet access in flight for everything from email and texting to catching up on the news. Because of weight, size, and cost considerations, such systems have been the purview of much larger aircraft, but the Avance L3 is small and light enough to be practical for the G2+. 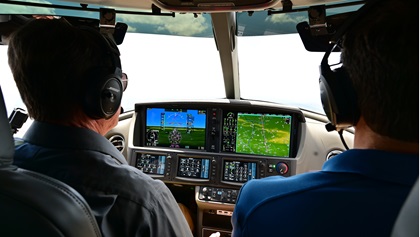 In flight, I chose the Gogo Wi-Fi network on my phone and was soon texting with family and friends while a steady stream of emails came in. Bergwall says the connection helps him stay up with work while traveling and has been helpful in scheduling quick turns with FBOs, making rental car and hotel reservations, and also ordering food via Uber Eats, DoorDash, and others to be waiting for him at the FBO when he lands. Meanwhile, passengers can be surfing the web. The Avance L3 does not support streaming of video.

Bergwall said Gogo is planning to provide special data rate packages to kick off the new service. Meanwhile, a switch in the cockpit allows the pilot to turn off the Wi-Fi in order to manage data usage and prevent distractions.

The Vision Jet is the first personal jet to carry such a Gogo system. In a statement released this week, Mark Sander, vice president of OEM sales for Gogo, noted, “The need and desire to be connected in flight is not bound by aircraft size or aircraft mission—everyone who flies in their own aircraft deserves to have fast, reliable connectivity.” The system covers most of the Lower 48 states, especially above 10,000 feet msl, and parts of Canada and Alaska. The Gogo system can be installed in addition to Garmin’s GSR 56 communication system that provides global data and voice communications via the Iridium satellite system.

Bergwall reports the new model of the Vision Jet includes several manufacturing and product improvements as well. One is the visual ruddervator trim tab indicator. A decal on the bottom of the left ruddervator shows whether it is set in the takeoff range—helpful if the electronic indicator should fail, an event that would otherwise ground the airplane.

Bergwall reports that a G2+ Elite, the first of which should be available in August, sells for $2.96 million and includes the takeoff improvement and the Wi-Fi system. The Elite version includes the options customers choose most often. The current G2 Elite model sells for $2.85 million. The FADEC software change and Wi-Fi are expected to be available as retrofit to G2 models, but not likely to be available for the earliest models of the Vision Jet, which debuted in late 2016. Since then the company has delivered about 265 airplanes and provided type ratings to 530 pilots. 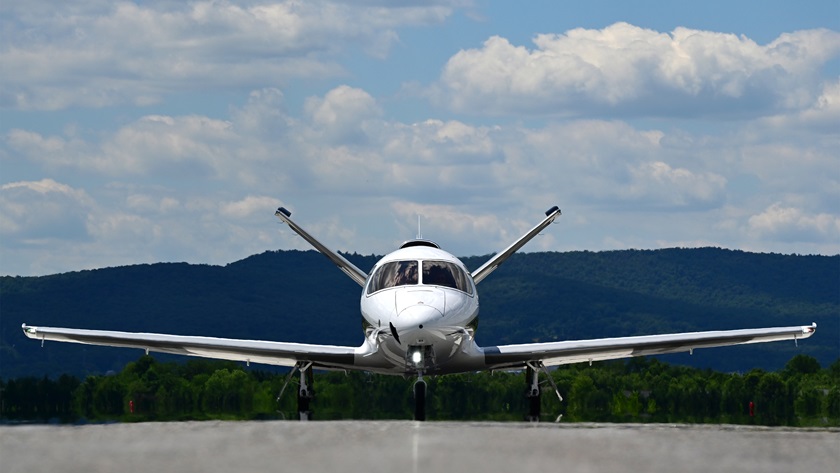 Editor in Chief
AOPA Editor in Chief Tom Haines joined AOPA in 1988. He owns and flies a Beechcraft A36 Bonanza. Since soloing at 16 and earning a private pilot certificate at 17, he has flown more than 100 models of general aviation airplanes.
Go to Thomas B Haines's Profile
Topics: Aircraft, Turbine Aircraft