Get the app Get the app
Get the latest news on coronavirus impacts on general aviation, including what AOPA is doing to protect GA, event cancellations, advice for pilots to protect themselves, and more. Read More
Already a member? Please login below for an enhanced experience. Not a member? Join today
News & Media Training Tip: Dews and don'ts

Your boss might be unhappy if you called in one morning from a distant airport to say that the place is socked in by fog and you will take off for home as soon as it lifts. 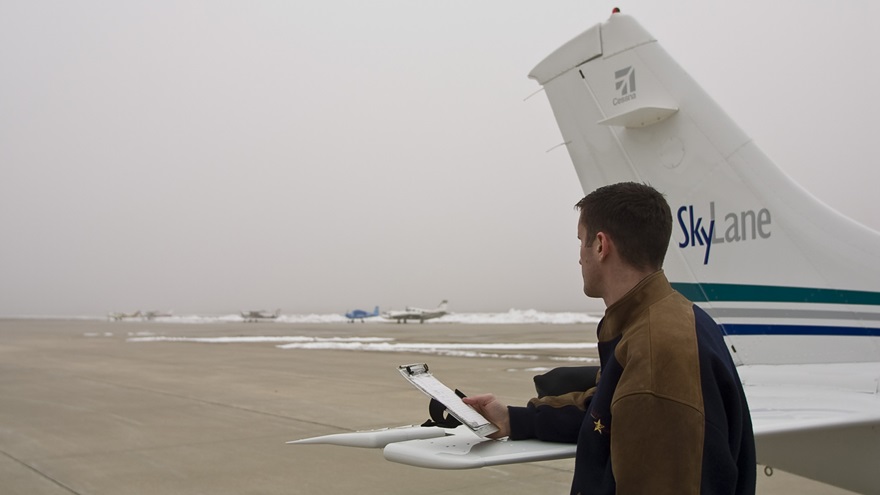 Photo by Mike Fizer.
The story of how you ended up stranded far from home (you’d explain contritely) is complicated. Yesterday you set out on a cross-country to a coastal airport where the weather was supposed to be fine, only to find it hidden beneath fog that had drifted in from the cold ocean (which had chilled the overlying air’s temperature to its dew point). At that point you turned around to return home, but there were rain showers in the vicinity that had saturated the overlying air, fog forming. On your instructor’s advice and the hour getting late, you checked weather at several inland airports and headed for the nearest one—easy to spot in a bend in a river—and landed just before the FBO closed.

Now it’s morning and the airport along the river is socked in by fog that formed as the overlying air cooled overnight.

How many forms of fog did you catalog in this cautionary chronicle of capricious condensation?

I count three—four if we allow a hazy definition.

Don’t forget the fog factor when flight planning, now that we have sprung forward in time, allowing later hours of day-VFR flying. Be cautious during training flights that begin in the afternoon and nibble at the edge of civil twilight by keeping an eye on the temperature and dew point convergence that commonly occurs around sunset. Failing to do so could precipitate problems if the spread closes up before you get down.

A private pilot applicant is expected to have knowledge of hazardous conditions that could affect a flight under visual flight rules including fog and mist.

In the scenario described, advection fog was encountered at the pilot’s original destination. Next, reported precipitation fog made the planned return to the home airport inadvisable. Radiation fog developed and thickened overnight at the airport along the river where the pilot diverted. Because that airport sits in a valley along the river, valley fog, a notably intransigent radiation-fog variant, might persist long after other fog has been reabsorbed in sun-warmed air the next day.

A weather-savvy pilot relies on a combination of forecasts, surface observations, and clear thinking to tell dews from don’ts when planning a VFR flight away from the home airport.