Get the app Get the app
Already a member? Please login below for an enhanced experience. Not a member? Join today
News & Media Spread the word on lasers

Spread the word on lasers

Most pilots don’t need to be told that laser pointers are not toys, whatever the cat might think, but the risk of causing a blinding distraction aboard a distant aircraft is not obvious to everyone. Recent data reveal there remains work to be done raising public awareness. 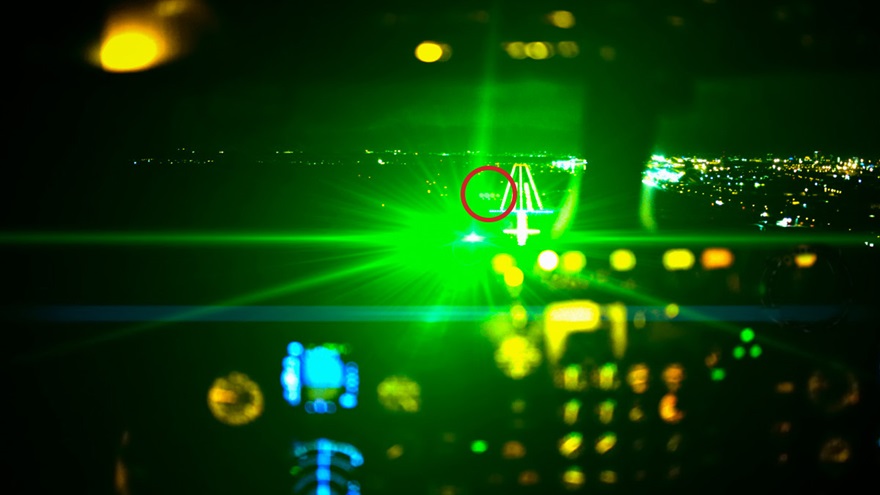 In this flight simulator image, a laser beam impact is depicted from the pilot's perspective. Notice how the runway glideslope indicator lights (circled) are obscured. Image courtesy of the FAA.
While commercial air traffic was down in 2020, the number of reported laser strikes on aircraft (6,852) increased to the highest number seen since 2016 (when flight crews reported 7,398 laser incidents), making it blindingly obvious that many people remain unaware that even a very small device can put lives at risk if misused, particularly near airports. Pilots may be temporarily blinded by the tightly focused beam of light, and that can obviously lead to terrible consequences, particularly if it happens during takeoff, departure, approach, or landing.

This has been a frustrating and persistent problem for years, despite intense effort by the FAA and law enforcement to educate those ignorant of this particular risk, as well as penalties including steep fines and potential incarceration for those who deliberately misuse lasers. It is a federal crime to aim a laser pointer at an aircraft, punishable by up to five years in prison and fines up to $25,000. The FAA updated its guidance to pilots in 2020 with an advisory circular detailing how and what to report about a laser incident to facilitate a law enforcement investigation.

A range of eye protection products have also been developed over the years, virtually all involving tradeoffs between visual perception and protection.

AOPA ePublishing Staff editors are experienced pilots, flight instructors, and aircraft owners who have a passion for bringing you the latest news and AOPA announcements.
Go to AOPA ePublishing staff's Profile
Topics: Security, Training and Safety