Get the app Get the app
Already a member? Please login below for an enhanced experience. Not a member? Join today
News & Media Celebrating Aviation Maintenance Technician Day

May 24 selected in honor of Wright brothers’ mechanic’s birthday

Pilots trust them with their aircraft and their lives, and trustworthy aviation maintenance technicians are as important to the aviation industry as safe pilots. The man Orville and Wilbur Wright trusted to build and maintain their first airplane engine was a machinist named Charles Taylor. In a 1948 interview with Collier’s magazine, Taylor told how he came to work with the Wright brothers in 1901. 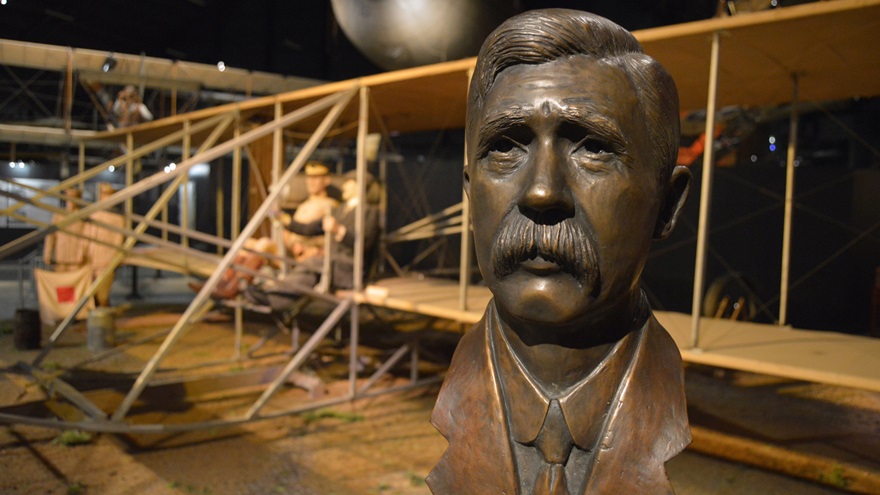 A bronze bust honoring the first aviation mechanic, Charles E. Taylor, is now on permanent display in the National Museum of the U.S. Air Force's Early Years Gallery. U.S. Air Force photo by Ken LaRock.
Excerpts below have been pulled from the Collier’s magazine article, “My Story of the Wright Brothers,” which was published on December 25, 1948. The article is reprinted in full on AviationPros.com.

“It was a hot June night in Dayton. It must have been a Saturday because I was at the Wright Cycle Company gassing with Wilbur and Orville. They used to stay open Saturday nights to take care of the folks who worked all week and couldn't get around any other time.

“One of the brothers, I forget which, asked me how would I like to go to work for them. There were just the two of them in the shop and they said they needed another hand. They offered me $18 a week. That was pretty good money…

“I always wanted to learn to fly, but I never did. The Wrights refused to teach me and tried to discourage the idea. They said they needed me in the shop and to service their machines, and if I learned to fly, I'd be gadding about the country and maybe become an exhibition pilot, and then they'd never see me again.”—Charles Taylor

“I knew they were interested in box kites and gliders, and that they had gone South to Kitty Hawk, North Carolina, in 1900 with a glider. I didn't know anything about that stuff but I did know something about the bicycle business…

“Three weeks after I went to work for the Wrights, they took off for the South with another glider and I was alone in charge of their bicycle company. They trusted me to handle not only their customers but their money.”

From bikes to airplanes

“…when they returned from the South in 1902, they said they were through with gliders and were going to try a powered machine…They tried to locate a motor… Nothing turned up. So they decided to build one of their own…While the boys were handy with tools, they had never done much machine work and anyway they were busy on the air frame. It was up to me…”

“We didn't make any drawings. One of us would sketch out the part we were talking about on a piece of scratch paper, and I'd spike the sketch over my bench. It took me six weeks to make that engine...The completed engine weighed 180 pounds and developed 12 horsepower at 1,025 revolutions per minute...”

“We block-tested the motor before crating it for shipment to Kitty Hawk. We rigged up a resistance fan with blades an inch and a half wide and five feet two inches long. The boys figured out the horsepower by counting the revolutions per minute. Those two sure knew their physics. I guess that's why they always knew what they were doing and hardly ever guessed at anything. We finally got everything crated and on the train…the boys had been making these trips for four years, and this was the third time I had been left to run the shop…”

“You know, it's a funny thing, but I'm not sure just how or when I learned that Will and Orv had actually flown the machine…I suppose their sister Katharine or maybe the bishop came over and told me about it. I know I thought it was pretty nice that they had done what they set out to do, and I was glad to hear that the motor ran all right. But I don't remember doing any jig steps. The boys were always so matter-of-fact about things…”

That sounds like today’s aviation professionals, who do their best work and sign their name to it, generally matter-of-fact about it all. These aviation maintenance technicians range from the guy stitching fabric on a vintage biplane to the avionics technician who keeps the latest airliners flying right. They are a vital workforce and usually go unrecognized by travelers. Smart pilots appreciate their favorite aviation technicians and honor them every May 24 on National Aviation Maintenance Technician Day.

In 2008, Congress passed a resolution “supporting the goals and ideals of ‘National Aviation Maintenance Technician Day,’ honoring the invaluable contributions of Charles E. Taylor, regarded as the father of aviation maintenance, and recognizing the essential role of aviation maintenance technicians in ensuring the safety and security of civil and military aircraft.”

The date was selected to honor Taylor’s birthdate. Born in a log cabin on May 24, 1868, just three years after the end of the Civil War, he lived to see supersonic flight and the first rockets. Taylor died in 1956, age 87, and was buried at the “Portal of Folded Wings Shrine to Aviation” in Burbank, California, among other aviation pioneers. Today, the FAA honors aviation mechanics with 50 or more years of maintenance experience with the Charles Taylor Master Mechanic Award.

Why not take your A&P to lunch one day this May, or at least buy a box of doughnuts for the maintenance hangar gang?