The long-feared June 30 eviction of general aviation from Kawaihapai Airfield on Oahu in Hawaii is on hold at least through December 31, but tenants face an uncertain future as state and military officials negotiate keeping the airport under civilian management. 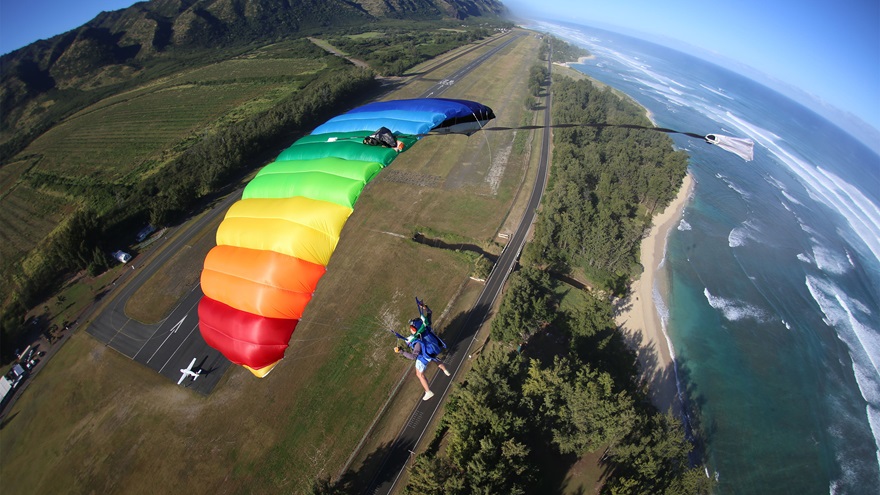 Kawaihapai Airfield, also known as Dillingham Airfield, is a popular tourist attraction for glider rides, skydiving, and flying lessons. The airfield is under threat of closure. Photo by Lindsay Wheeler.

The Hawaii Department of Transportation announced the planned evictions in April 2020 as it worked to engineer an early termination of its joint-use lease with the U.S. Army for the airport, also called Dillingham Airfield.

Local airport advocates promptly rallied against the closure with AOPA helping to coordinate the effort and raise media awareness. The closure issue made its way before the state legislature—a development seen expediting the current negotiations.

Finding solutions to some issues will extend far beyond 2021, which is why AOPA is disappointed with yet another arbitrary eviction date looming over the process.

The mixed messaging from state transportation officials creates an untenable situation for 11 airport businesses and their 130 employees, causing airport supporters to question the state’s refusal to rent empty hangars to a waiting list of potential tenants, effectively passing up revenue opportunities that could partly offset public subsidies.

AOPA has made it known that it is very difficult to do business with a looming closure date if companies cannot hire, invest in their facilities, purchase inventory, or complete compliance requests when they are also being asked to shutter their businesses.

The situation has take a more positive turn, however, with a variety of “moving parts” propelling the issue toward a solution, including the U.S. Army committing to work with the state on a joint-use agreement for the airport, tenants addressing compliance issues, a task force taking on the water-system challenge, and the FAA in forbearance, for now, on its compliance concerns.

On the latter point, an FAA letter to the Hawaii Department of Transportation said the FAA “will not pursue placing HDOT in noncompliance with grant assurances on this specific issue so long as HDOTA is actively pursuing resolution to this situation, and there appears to be reasonable progress towards resolution.”

The local advocacy organization Save Dillingham Airfield welcomed the eviction-deadline extension but also expressed displeasure with the continued eviction threat as officials addressed the problem of how to bring the airport water system into compliance with federal requirements.

“We are waiting for greater definition on what those progress requirements are,” it said, adding the group’s wish for the threat of lease termination to be removed.

The FAA left no doubt about the high priority it places on the water system dilemma, noting that it “must be resolved on or before the end of the current lease with the US Army.”

At the airport’s grassroots level, concern remained palpable despite the delayed eviction date. For 20 years, Steve Lowry has operated a flight training business at the airport and he runs several programs providing free flight training for local youngsters.

In a video interview, he said the airport’s loss would be a “crushing” blow to the GA community and those it serves.

“We’ve invested our whole lives in this, literally,” he said.