Get the app Get the app
Already a member? Please login below for an enhanced experience. Not a member? Join today
News & Media Sun 'n Fun leader Leenhouts to retire in 2022

Sun 'n Fun Fly-In Inc. President and CEO John "Lites" Leenhouts will lead the organization through one more show, announcing November 15 his plan to retire after the 2022 event concludes in April, after more than a decade of presiding over the transformation of an event once known as "spring break for pilots" that now focuses on building aviation's future. 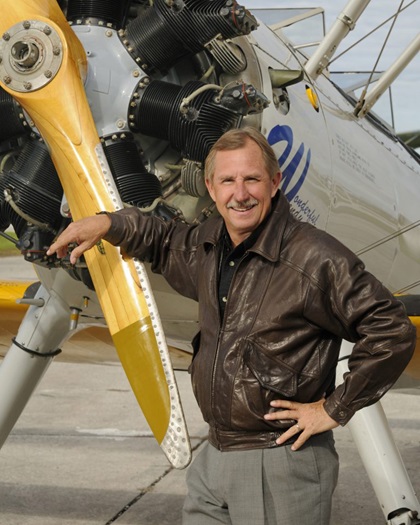 Leenhouts, a former U.S. Navy pilot who served for 27 years before going to work for Northrop Grumman Corp for 11 years, was hired in 2011 to lead the organization that runs what is now known as the Sun 'n Fun Aerospace Expo, and moved quickly to transform the event from a purely fun fling under the Florida sun to one with an educational mission at its core: The Aerospace Center for Excellence was established under his leadership on the Lakeland, Florida, campus to provide aviation-based science, technology, engineering, and math education for students in central Florida schools.

"The future of the Sun 'n Fun fly-in is set forever and ever and ever," Leenhouts reported in a recent video conversation with Gene Conrad, director of Lakeland Linder International Airport, where the event and the ACE, largely funded by proceeds from the event, are based. That conversation, posted November 4, touched on planned improvements to the airport that will allow the airport to accommodate future growth of the show, including an improved layout, and a new runway.

"The future is secure, and we are guaranteed a new facility, as this airport expands," Leenhouts said. "It'll be bigger and better than ever."

Leenhouts earned high praise from his staff and the board of directors he reports to in a November 15 press release announcing his impending departure.

“He was the perfect addition to our team. I don’t think we could have found anyone with more experience or excitement about aviation," said Sun 'n Fun Fly-In Inc. Chief Financial Officer Tracy Neal, in the news release. "He jumped right in and helped us transform from a Not-For-Profit living on a line of credit to a Not-For-Profit able to survive the COVID pandemic. He has guided the team through major improvements across the entire campus, including our latest addition of the Ramus SkyLAB Innovation Center. He has forged bonds with volunteers, donors, and students that will be remembered for years to come."

Leenhouts will continue to be "an active advocate for both ACE and SNF" following his retirement, the organization noted. Dr. Harley Richards, who is the chair of the Sun 'n Fun Fly-In Inc. board of directors, expressed the board's gratitude and appreciation of what Leenhouts achieved during his tenure: "His knowledge of general aviation as well as his organizational and communication skills have enabled him to take SUN ‘n FUN and ACE to a level we could have never imagined. We are anxious to begin our new relationship with Lites as he becomes an Ambassador to ACE and SUN 'n FUN helping us grow and expand our Aerospace Education footprint."

Leenhouts credited others for those achievements in his own statement, citing a "can-do spirit and total team effort on the part of Board, Staff, and Volunteers…it has truly been an honor to serve alongside them in our adventurous journey for this noble cause.” Leenhouts continued: “Of all the wonderful accomplishments that I have been privileged to be a part of while here, the most rewarding experience has been observing average kids populating our ACE/SNF campus and over a very short period of time evolving into competent, capable, and focused young men and women who have become good citizens with bright futures.”