World War II veteran James “Jim” Miller, 94, flashed a smile and a thumbs-up from the front seat of a restored 1940 Boeing Stearman Model 75 Kaydet after Dream Flights pilot Marcus Smith brought the taildragger to a halt in Westminster, Maryland, September 6.

“It was nice and smooth,” Miller said as he pumped Smith’s hand in appreciation. Acting as ground crew for the flight, fellow Dream Flights pilot Max Combeau chocked the blue-and-yellow biplane’s wheels at Carroll County Regional Airport/Jack B. Poage Field.

The mid-Atlantic honor flight is one of about 500 completed missions that began August 1 to remember the Greatest Generation as the youngest of them approach their mid-90s.

Operation September Freedom is intended to locate and honor more than 1,000 World War II veterans with open-cockpit flights during a coast-to-coast barnstorming sweep of more than 300 cities in 61 days. Dream Flights has divided the United States into six regions and dispatched six similarly restored Boeing Stearman Model 75 biplanes—known in their military configuration as U.S. Army PT–17 trainers—to recognize senior veterans for their service. 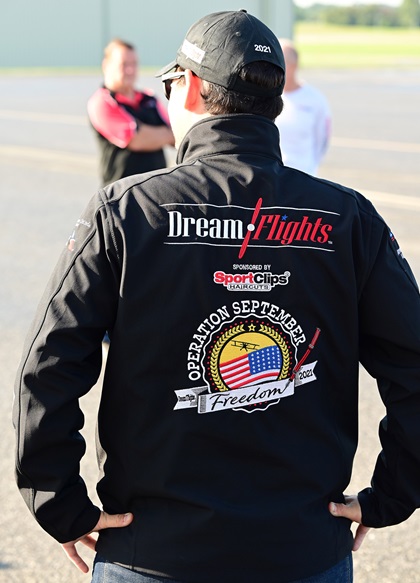 Smith and Combeau are responsible for East Coast flights and were barnstorming to New England when they stopped in central Maryland. The two planned to honor as many veterans as possible with 20- to 30-minute open-cockpit flights at about 90 mph.

“It’s awesome, it’s exciting, and it’s rewarding,” said Smith, a corporate pilot, and a Piper J–3 Cub owner from North Carolina who enjoys flying low and slow at 1,000 feet above ground level. “It’s a culmination of everything I Iove about aviation. It’s so much more than just a flight.”

“It’s such an honor to fly these guys,” added Combeau, a fixed-wing medical evacuation pilot and a Piper J–3 Cub owner from Nevada. “It’s a small thing for us but it’s so rewarding for the veterans and their families.”

For Clint Cawley, an AOPA member since 2014, a third-generation Stearman pilot, and a major airline pilot, the decision to donate his family’s Stearman to the Dream Flights organization was not a hard one.

“I had started flying missions for Dream Flights in Reno in 2019,” and then received a letter from Dream Flights Founder and President Darryl Fisher “who was asking those flying a Stearman to consider donating their airplane to the organization,” Cawley said. “The mission is very dear to me, so my wife and I had no hesitation.” 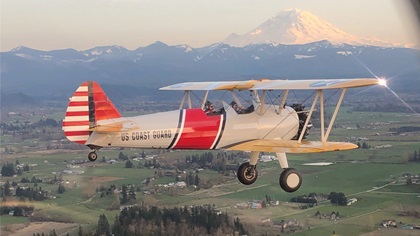 He continues to fly Dream Flights with other Stearmans, and now has piloted about 100 missions. Cawley has flown nearly 50 Dream Flights since August, when he took a two-month leave of absence in advance of the National Stearman Fly-In.

Cawley comes from a family steeped in in aviation. His father, grandfather (who fought in World War II), uncles, cousins, and wife are all pilots. His recently took his maternal grandfather for a Dream Flight in Bremerton, Washington, marking the first time his grandfather had flown with him. That flight marked the beginning of Operation September Freedom, Dream Flights’ initiative to fly as many World War II veterans as possible in 2021.

Cawley was joined by 12 other Dream Flights pilots who converged on Galesburg, Illinois, for the annual Stearman fly-in.

“Our World War II vets are getting up in age,” Cawley added. “We have to thank them every day that they are with us. For my own relatives and all other veterans, we owe them thanks for many of the freedoms we have today, including the freedom to fly. Taking a veteran on a Dream Flight is the best way I can show my appreciation.”

According to Cawley, the actual flight is just part of the Dream Flight experience for the veterans.

“We’ll often have several vets together and they’ll just start swapping stories and making connections,” he explained. “Their families will explain that it can be difficult for them to open up about their experiences to those closest to them, but they will to those who shared similar experiences. I’ll often hear from a family member that ‘I never heard that story in all these years.’”