Get the app Get the app
Already a member? Please login below for an enhanced experience. Not a member? Join today
News & Media The Mexican Lindbergh

Should you become lost on the sandy roads that meander through the Pine Barrens of New Jersey, beware of the “Jersey Devil,” a legendary flying creature with leathery bat wings, a goat’s head topped by horns, cloven hooves, and a forked tail. When you hear a bloodcurdling scream, you’ll know it’s nearby. 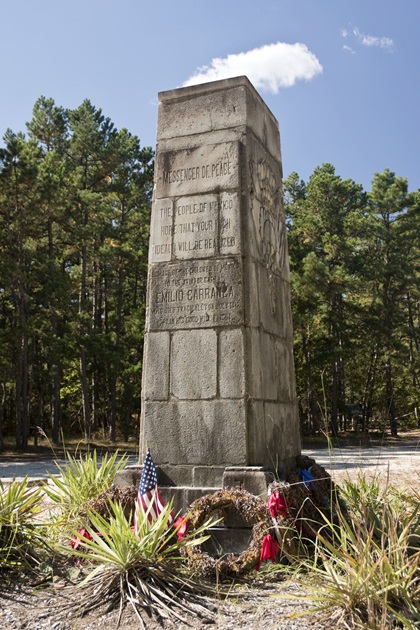 If you evade the Devil and find yourself on Carranza Road, you may wonder how a remote, rural road in New Jersey came to have a Mexican family name. To find out, stop to examine a stone monument standing along this lonely road and learn how the “Lindbergh of Mexico,” Capt. Emilio Carranza Rodriguez, is forever linked to New Jersey.

Two months after his famous flight from New York to Paris, Charles Lindbergh toured the United States, visiting all 48 states before heading south to tour several Latin American countries between December 1927 and February 1928. Lindbergh flew 9,500 miles from Washington, D.C., to Mexico, Guatemala, British Honduras (now Belize), El Salvador, Honduras, Nicaragua, Costa Rica, Panama, Colombia, Venezuela, Puerto Rico, the Dominican Republic, Haiti, and Cuba. His first stop was in Mexico City where he met the U.S. ambassador and his daughters, one of whom would become his future wife.

During and after the excitement of Lindbergh’s historic trans-Atlantic flight, everyone and entire nations were anxious to embrace aviation, including Mexico.

South of the border, a young military flyer, Carranza, followed Lindbergh’s exploits while setting a few aviation records of his own. In 1928, he made the third longest nonstop solo flight, flying 1,575 miles from San Diego to Mexico City. It was no surprise that Carranza was selected to make a goodwill flight, representing Mexico, to the United States, in response to Lindbergh’s tour of South America. After all, he was the grandnephew of a former president of Mexico and nephew of the director of the Mexican School of Military Aviation.

Flying an airplane named The Mexico Excelsior, a Ryan Brougham similar to the Spirit of St. Louis, Carranza planned a nonstop flight to Washington, D.C. He didn’t quite make it after being forced to land in North Carolina due to fog, but on June 12, 1928, he arrived in Washington, D.C., where he had lunch with President Calvin Coolidge.

Flying on to New York City, Carranza landed at Roosevelt Field, where Lindbergh had departed for Paris one year before. New York Mayor Jimmy Walker presented Carranza with the key to the city and hosted the aviator at several banquets with celebrity guests such as Charlie Chaplin and boxer Jack Dempsey. The 22-year-old pilot was soon dubbed the “Mexican Lindbergh." Next, Carranza flew to West Point, where he reviewed the cadets, and on to Lowell, Massachusetts, to open a new airfield. Returning to New York City, Carranza attended more luncheons, dinners, and dances.

Carranza planned to complete the longest nonstop solo flight in the Americas when he returned from New York to Mexico City. Although he was anxious to return home, summer thunderstorms forced Carranza to postpone his flight day after day. After a month in the United States, Carranza suddenly decided to depart on the afternoon of July 12, while at a dinner at the Waldorf Astoria Hotel. Lindbergh and other aviators advised him to wait another day because of a forecast for stormy weather. He chose not to take Lindbergh’s advice and took off about 7 p.m. during a break in the thunderstorms and with darkness falling.

Tragically, Carranza didn’t have Lindbergh’s luck. He crashed in the Pine Barrens of southern New Jersey about 85 miles into the flight. The flat land and forests of the Pine Barrens are known as terrain that fuels thunderstorms that build up as they move east until reaching the Jersey Shore. The cause of the crash could not be determined, although some presumed lightning struck the airplane while others believed Carranza was flying low, looking for a spot to land, when his aircraft hit the trees.

The next morning, John Carr and his family were picking berries along a remote road in the Pine Barrens when they came upon the wreckage and, after a search, the dead pilot. Carr went to the nearest town to call the police, and Carranza’s body was retrieved and taken to a local shop before being shipped to New York City. Carranza’s remains were returned to Mexico by train with full military honors. More than 200,000 people lined the route to view the aviator’s coffin as it traveled to New York’s Penn Station.

Carranza was buried in the Rotunda of Illustrious Persons at Mexico City’s Dolores Cemetery, a spot reserved for national heroes. A pine tree from the crash site was planted by his grave.

If you think of New Jersey as only chemical plants along the Jersey Turnpike and decaying Atlantic City casinos, you haven’t ventured into the Pine Barrens. The “Barrens” is a swampy, forested area so large that when a small part was designated as the New Jersey Pinelands National Reserve, that was still more than 1,700 square miles and larger than the state of Rhode Island.

In 1931, a monument was erected at the site of the crash, funded with pesos donated by Mexican schoolchildren. The 12-foot granite obelisk was built from stones quarried in Mexico, with each block representing a Mexican state. On one face is carved a falling Aztec eagle and on the opposite an arrow pointing skyward. On the remaining two faces a message in English and Spanish reads, “Messenger of Peace. The people of Mexico hope that your high ideals will be realized. Homage of the children of Mexico to the aviator captain Emilio Carranza who died tragically on July 13, 1928 in his good will flight.”

The date of his death on the monument is probably incorrect. If Carranza departed at 7 p.m. on July 12 and flew 85 miles, it’s likely he crashed late on July 12.

Today, the monument stands in a clearing among the pine trees with Yucca plants and dried memorial wreaths around the base. The monument shows some erosion of the stone, especially on the carved lettering.

Each July, on the Saturday nearest the anniversary of his crash, the American Legion Mount Holly Post 11, with staff of the Mexican consulates in New York City and Philadelphia, honors Carranza with a wreath-laying ceremony at the monument.

The next time you’re driving on the New Jersey Turnpike, make a 26-mile detour to visit the Carranza monument. Take New Jersey Turnpike Exit 4 to state Route 73 S (heading southeast) and then turn left onto Route 616/Church Road East. The road will become Evesboro Medford Road. Turn left onto state Route 70 E and continue to U.S. Route 206 S at the traffic circle. Follow U.S. Route 206 S for 1.25 miles and turn left onto Carranza Road and drive 8.8 miles southeast to the monument. For directions, search for “Carranza Memorial” in Google Maps. The coordinates are: 39°46′38.6″ north 74°37′56.6″ west. It’s about 45 miles west of the roulette tables at Atlantic City and 35 miles east of Philadelphia.