Beechcraft King Airs have had a firm hold on the twin turboprop market ever since the first of the brand debuted in 1964. With total sales topping 6,500 airplanes, King Airs continue to dominate, with the biggest, top-of-the-line King Air 350 series holding onto a lucrative niche. 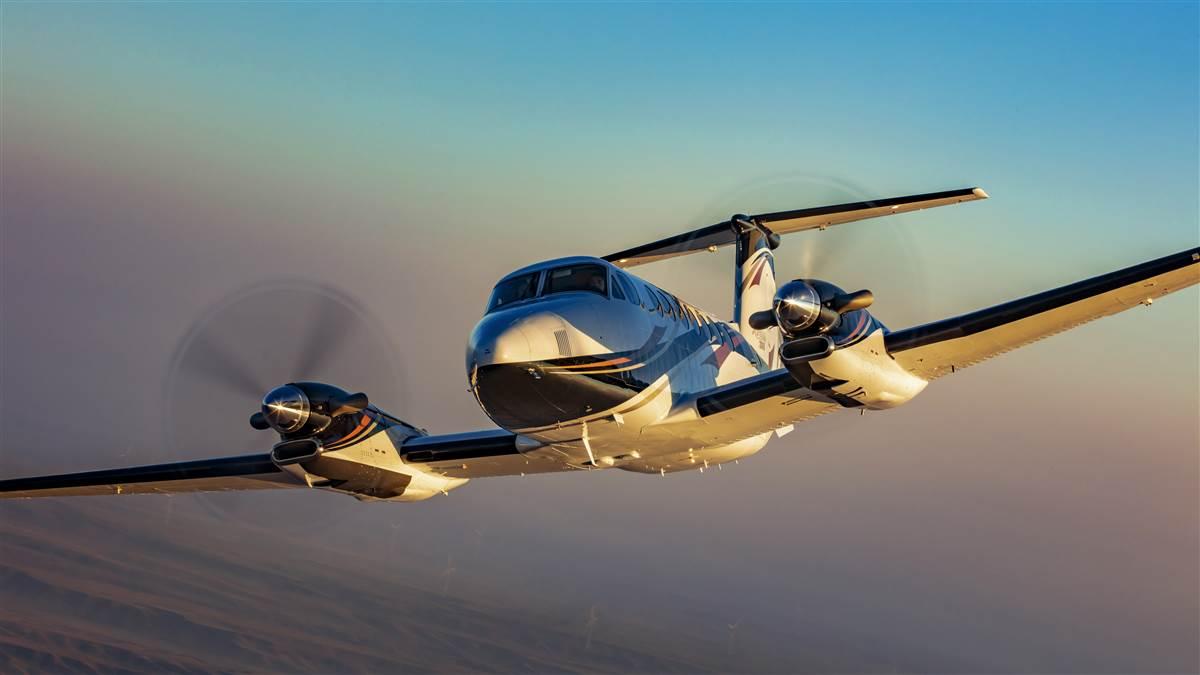 In spite of the COVID-19 pandemic, Textron Aviation sold 34 King Air 350s in 2020, a number topped only by the company’s 51 Cessna Caravan sales. But lately there’s been a shakeup in the King Air fleet.

In August 2020, Textron announced production of the King Air 350i would be phased out and replaced by the new King Air 360. A similar fate befell the latest of the 200-series King Airs—the King Air 250GT—with the December 2020 news of the advent of the King Air 260. Then came word in March that production of the smallest King Air models—the C90 series, including the most recent C90GTx—would cease altogether. The Citation Sovereign twinjet was also dropped from Textron’s business jet line.

Why mess with success? For the King Airs, that essentially boils down to one word: automation. The 260s and 360s come with autothrottles as standard equipment, as well as automated, digital pressurization systems and upgraded interiors. The big news is that autothrottle system.

This is the Innovative Solutions & Support (IS&S) ThrustSense autothrottle system. IS&S has been offering this system as an aftermarket install on both King Airs and Pilatus PC–12s, but now it’s standard equipment on the new King Airs (optional on the new PC–12NGX), and installed on the factory assembly line. The system helps tame workload, prevents engine overtorques and ITT overtemps, lets pilots fly selected airspeeds, and guards against underspeeds and overspeeds. In engine-out situations at airspeeds near VMC, the system is designed to minimize thrust asymmetry by retarding the operating engine’s power to prevent a loss of control. For all these benefits, IS&S says it takes just an hour of ground school and an hour’s flying time to master.

Front and center on the glareshield is IS&S’ standby attitude indicator that doubles as the A/T controller. An on/off button powers up the brains of the system, a menu button calls up an A/T value, and a selector knob chooses one of them—torque or airspeed. Above the left-seater’s primary flight display is an A/T annunciator that lights up to show the system is powered. The rest of the system’s flight (takeoff, climb, and go-around) and protection modes operate in the background.

After engine starts, preflight checks, and a taxi to Runway 19L at Wichita’s Dwight D. Eisenhower National Airport, it was time to put the A/Ts to work. Lined up on the runway and holding the brakes, you press the go-around button on the left power lever to engage the takeoff mode. This brings up the flight director’s command bars to a 10-degree takeoff pitch attitude, and simultaneously brings the engines to takeoff power. Unlike the autothrottles you may be familiar with, there’s no need to push the power levers up halfway before the system “grabs” them and takes over. The power levers start at the idle position, then move on their own to reach the target takeoff power setting. This may take some getting used to. So will the absence of a friction control; the A/T system’s actuators make sure there’s no lever creep.

It’s a comfort to know that the system observes the airplane flight manual recommendations and limitations. This means that during takeoffs, the system will go to optimal torque values for the ambient pressure altitude and temperature conditions. Yet another new feature in the King Airs 260 and 360 also kicks in as you begin the takeoff run: The new pressurization system will prepressurize the cabin. This prevents pressure “bumps” from happening at liftoff, as the airplane’s weight comes off the wheels.

Five minutes after takeoff, the system enters climb mode. This puts the engines at either 100 percent torque or ITT value of 785 degrees, whichever comes first. Gone is the usual pilot workload of tweaking power.

For the rest of the flight, between the Rockwell Collins ProLine Fusion capabilities, the integrated flight control system, the digital pressurization system, and the A/Ts, the airplane essentially took care of itself. This let Textron senior demonstration pilot Jared Jacobs and I focus on the situation at hand. There was lousy weather in Kansas that day, with instrument conditions at the surface and widespread convection. Some thunderstorm cells were contouring and featured red bull’s-eyes of heavy precipitation. The Fusion’s RTA-4112 multi-scan radar proved its worth as we put the imagery in a full-screen view on the center multifunction display. With twice the scan rate of traditional radars, automatic ground-clutter suppression, simultaneous monitoring of multiple scan angles, and increased radar-scan dwell time in the direction of any turns, this radar let us deviate with confidence.

We used the A/Ts to set airspeed and torque values. It’s just a matter of dialing up the airspeed or torque you want and waiting while the power levers move to reach it. Cruising at FL300, at one point we set power manually for maximum cruise power, which at our ISA+12 conditions was 296 KTAS with power set at the maximum 800-degree ITT value. Fuel burn was 290 pph—or about 43 gph—per side.

On the other hand, there is what Textron calls a Single-Engine Protection (SEP) feature (IS&S calls it LifeGuard). This kicks in when airspeed drops near VMCA (minimum single-engine control speed with an inoperative engine, in the air). This is when asymmetric thrust from the operating engine can cause the airplane to yaw and roll toward the inoperative-engine side. If airspeed is flirting with VMCA, the pilot won’t have enough control authority to counteract the yaw or roll, and the airplane could experience a “rollover” and loss of control. The only way to prevent this is to lower the nose to increase airspeed well above VMCA and reduce power on the operative engine to decrease asymmetric thrust. SEP will automatically reduce the operating engine’s power when airspeeds near VMCA. Think of it as rollover protection.

You’d have to be outright oblivious to get into this situation. After all, the King Airs 350, 350i, 250GT, and others—as well as the King Airs 260 and 360—have several other automatic features for when an engine fails. First, the autofeather system will bring the affected engine’s propeller to a near-feathered condition (the pilot has to fully feather it manually). Next, autoignition will light the engine’s igniters to attempt a restart. Then, a rudder boost system will apply corrective pressure as an aid to prevent a yaw to the inoperative-engine direction. If all of this somehow escapes the pilot’s attention, and airspeed approaches VMCA, then the SEP will step in to intervene.

For the descent back to Wichita, we experimented with the A/T to select both airspeeds and power settings. Once below 10,000 feet, it was set-and-forget to select 250 KIAS to comply with the FARs. On the ILS to Runway 19L, fully configured, Jacobs suggested 35 percent for the A/T’s torque mode. We could have selected 120 KIAS in airspeed mode, but with the turbulence the power levers would have chased airspeed fluctuations. So 35, then 25 percent torque it was, down through the murk, then voila—the runway—then A/T off for short final (using a button on the right side of the rightmost power lever) and a landing. Should a go-around have been needed, just press the other lever-mounted A/T button. Up come the command bars—to 8.5 degrees nose-up—and so does climb power.

But even as the newer King Airs 260 and 360 take on more advanced avionics and systems, their original essence pervades. The 1960s subpanel, with its toggle switches and covered gang-bar for the battery and generator switches. The overhead panel. The proudly retro, sidewall-mounted fuel panel, with its outsize gauges. The windshield wipers. The massive yoke, with its art-deco swoopy lines, ergonomic sensibility, and hefty feel.

These signature design elements are so prominent that it can be easy to miss the incremental changes.But they’re there. Ever more powerful engines. T-tails. Autofeathering. Raisbeck wing lockers and aft strakes. Tweaked props, cowls, and leading edges. Winglets. Passive, tuned vibration absorbers and soundproofing. The big ER versions, with their huge nacelle tanks. Better seats and seat materials, culminating in the 360’s pressure-mapped seats. The huge cargo door option, with its door-in-a-door. And now, autothrottles.

And then there’s the 2015 jump from Pro Line 21 to Pro Line Fusion avionics. And yet, all that tech bling somehow melds with the legacy look. Finally, there’s the airplane’s tall ramp presence. Some say that King Airs are dated, that their niche is being challenged by light jets. Textron counters that King Airs can fulfill 75 percent of typical business jet missions. Sure, they’re slower, but they’re fill-the-seats, fill-the-tanks airplanes; can carry more; cost less to operate; and can use shorter runways.

All specifications are based on manufacturer’s calculations. All performance figures are based on standard conditions and maximum weights unless otherwise noted.
txtav.com