Nailing the power-off one-eighty is a source of pride for aspiring commercial pilots. It’s a precision maneuver done with throttle closed on the downwind leg of the pattern abeam a designated touchdown spot on the runway, often the 1,000-foot markers. An acceptable landing falls not before and within 200 feet beyond the spot; otherwise, it’s a practical exam bust. 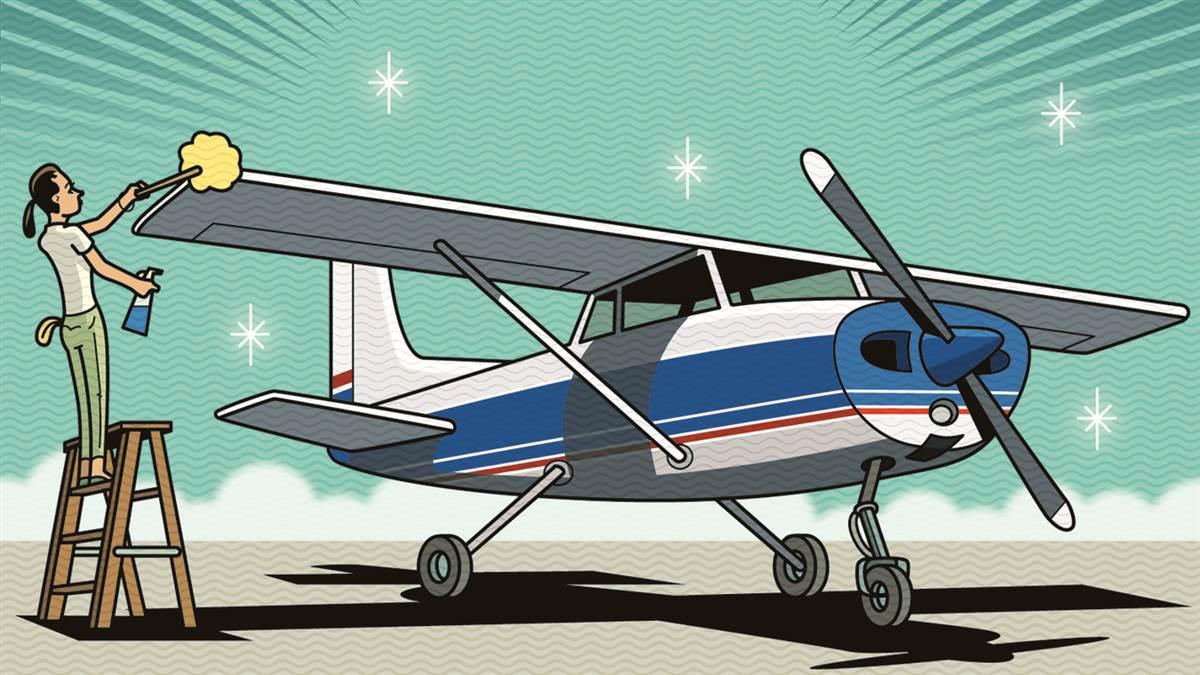 Illustration by Peter and Maria Hoey

All too often, candidates focus on planting the aircraft in that narrow window and forget about landing with any sort of grace. Such carrier landings may be appropriate at sea, but they have no place as a normal procedure because they exact an unnecessary toll on the aircraft. I think to myself, “If these folks owned the aircraft and paid for the maintenance, they would strive for better landings, spot be damned.”

As a designated examiner and a flight instructor, I regularly get a front row seat to see the care, or lack thereof, with which pilots treat aircraft. At the end of one commercial practical exam, the candidate taxied to the end of a long row of Cessna 172s to park in the last spot. Instead of swinging the tail all the way around to the right to avoid blasting the parked airplanes, he added power and stomped on the right rudder to maneuver the tail toward his spot. The other airplanes swayed, and any loose gravel on the ramp was certainly flung their way. Just a bit of planning can save these airplanes from such abuse.

At the beginning of another practical exam, the candidate started up the airplane and completed his pre-taxi checklist. After pushing in the throttle, he checked his brakes without ever retarding the throttle and asked if I would like to check mine while we taxied away from the tiedown spot. After confirming that I would, he immediately released the controls and said, “Your airplane!” My heart raced as I retarded the throttle and found the brakes just in time to avoid taking out a line of parked Diamond DA40s. There are two additional steps to the flight controls exchange procedure for a reason.

Teaching aerobatics in my own Cessna Aerobat Wilbur, I must remind even seasoned pilots that heels should be on the floor during taxi. Applying the brakes without idle throttle is not only inefficient but it’s uncomfortable for passengers and exacts unnecessary wear and tear on the brakes.

I always say that you often can tell the difference between an owner and a renter on the landing roll. A renter will more likely slam on the brakes to take an early taxiway, but an owner usually will touch down at a lower speed, employ aerodynamic braking, and then make lighter use of the brakes to slow and turn off the runway. The only counterexample I ever found to this is a friend who routinely slammed on his brakes to make an early taxiway and explained that his pride is worth more than brake pads. Mine most definitely isn’t.

Early in my aviation career I was guilty of similar lapses, but my flight instructors encouraged me to clean up these and other bad habits. Treating aircraft with care on the ground and in the air instills confidence in passengers. It just takes a bit of extra thought and planning to do so.

Even after 20 years of aircraft ownership, it turns out that my own education continues. Last winter, I swapped airplanes with my friend Michael Moore from Michigan so that my Beechcraft Bonanza, Niky, could get its annual inspection completed there. We met in Ohio so I could take his Bonanza, Ethel, back home to Sewanee. As I hopped up on Ethel’s wing to stow my bags, he barked, “Hey, don’t step on my flap!” I was confused because the flaps were retracted, and the right flap has the anti-slip coating designed for feet.

Moore explained that he doesn’t like putting unnecessary forces on airplane parts that move; after all, it’s not difficult to step over the flap onto the wing. Fair enough. Ethel has come a long way in her restoration process and Moore pampers her. Since then, I’ve stopped stepping on Niky’s flap for the same reason.

I confess that I am haunted by the accident three years ago in which a wing separated from a Piper Arrow during a practical exam in Florida. Many flight schools used these airplanes almost exclusively for commercial applicants who needed to bring a complex aircraft to the exam. I can only imagine how many times such aircraft were subjected to hard landings as flight school students practiced their power-off one-eighties. I don’t know if that was a factor for this accident but when the FAA moved to no longer require a complex aircraft on the commercial and flight instructor practical exams, I breathed a sigh of relief.

Earlier this year, a commercial candidate turned final toward the 1,000-foot markers on the runway for his power-off one-eighty and it looked as if he might come in a tad long. Instead of nosing over to ensure he hit the markers, he raised it and made a beautiful nose-high landing past their end. His heavy sigh signaled an anticipated notice of disapproval. After he shut the airplane down, I told him that while he didn’t make the mark, he took the high road and performed a graceful landing.

In other words, he acted like a commercial pilot that day and deserved the certificate. Incidentally, the 1,000-foot markers are 150 feet long, which means that he still had 50 more feet beyond their end to touch down. While it’s easy to see if a candidate lands short, at 65 knots, I am not a perfect judge of exactly what 50 feet looks like. Just saying.

I am mindful that Wilbur and Niky are 43 and 53 years old respectively and with appropriate care I hope to be flying them for decades to come. They have names because they are family to me. Flying an airplane like an owner is the best way to instill confidence in passengers and extend the longevity of the fleet. Lower maintenance and insurance costs translate to lower rental rates, too. Most important, if we all treat an airplane the way we hope the last person who flew it did, aviation will be safer too.