Supercooled, and looking for trouble

You probably don’t think much about such exotic processes as supercooling or changes in states of matter if you fly into a cloud or precipitation this winter. Unless maybe you were a chemistry major. 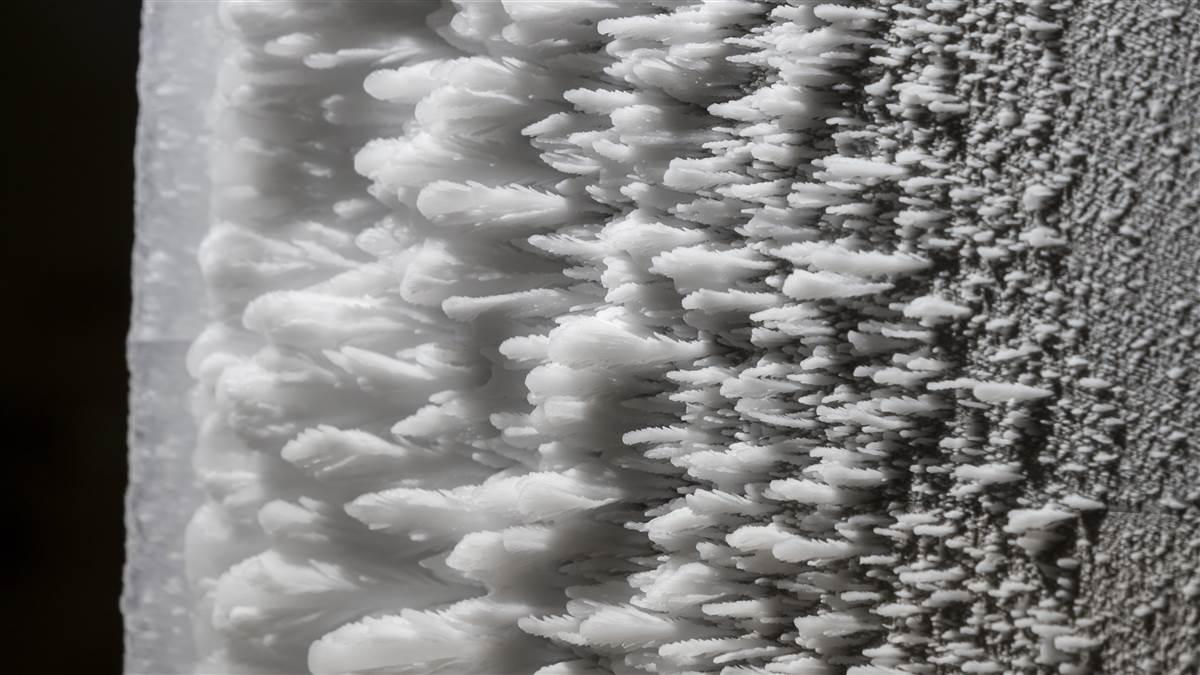 No, you’re worried about the chances of icing. Those chances, and the types of icing, depend heavily on the nature of the clouds or precipitation you encounter. Of course, ambient temperature is one of them, and here’s where a big factor like supercooling enters the picture.

When water droplets are below freezing, yet still in a liquid form, they’re in a supercooled state. They remain liquid until they encounter condensation nuclei. These could be tiny dirt or other particulates suspended in the air, or a very large “particulate” like your airplane. When the droplets lose their molecular fluidity and are given an object they can bond with, that’s when you can see ice accretions begin to form on the airplane. First on the smaller projections—hinges, rivet heads, and other small-radius objects—then on the wing and other leading edges.

Besides temperature, droplet size and liquid water content (the volume of liquid water in a cloud or precipitation sample) are other components in the brew that can put various forms of ice accretions on your airplane. These disrupt lift, create drag, add weight, and reduce thrust—no matter the size of airplane or the power it can put out. All types of ice are dangerous, even when you see terms like “trace,” “light,” “moderate,” or “heavy” attached to them in icing forecasts. If you fly in “light” icing conditions long enough, the accretions can build to the point that they produce the effects of “heavy” icing. This is one reason why the Aviation Weather Center website uses probabilities in its current and forecast icing potential (CIP and FIP) charts, giving chances of any icing beyond the 25 and 50 percent rates. The CIP and FIP make a point of identifying the likelihood of one of the worst icing conditions, which we’ll touch on shortly.

Trace icing, as the name implies, is the classifier that signals the very first signs of ice. It’s a warning that conditions could be right for heavier accumulations to come. It’s time to assess your situation and play it conservative as you mull over your next moves. There won’t be any effect on performance, and the accumulations may be barely perceptible. Still, a 1964 report from the National Coordinating Committee for Aviation Meteorology (NCCAM) provides food for thought. It said that trace ice can accumulate one-half inch of ice on a small probe in an 80-statute-mile distance. And yet, the report says the use of any deicing equipment, such as inflatable-rubber leading edge boots, is unnecessary.

Rime icing, which consist of small droplets and has low liquid water contents, typically accumulates when flying in stratus clouds. Air temperatures typically range from minus 20 to minus 10 degrees Celsius (minus 4 to 14 degrees Fahrenheit). At first, it can leave a pencil-thin line of rough-textured ice on an airplane’s leading edges, then expand with time to cover more of the leading edges. Keep flying in rime ice and performance deteriorates after one hour.

Clear icing is definitely bad news. It’s associated with large supercooled droplets and air masses with high concentrations of liquid water, such as those found in cumulus or cumulonimbus clouds. It typically occurs in temperatures right around the freezing point—between minus 10 and 0 degrees Celsius (14 to 32 degrees Fahrenheit). Any length of time or distance flown in clear ice can be very hazardous. That’s because those large droplets remain liquid after initially striking the airplane, then flow back along the wings and other surfaces before ultimately freezing solid. The resultant ice buildups distort the shape of the airfoils and can ruin lift and render control inputs ineffective. 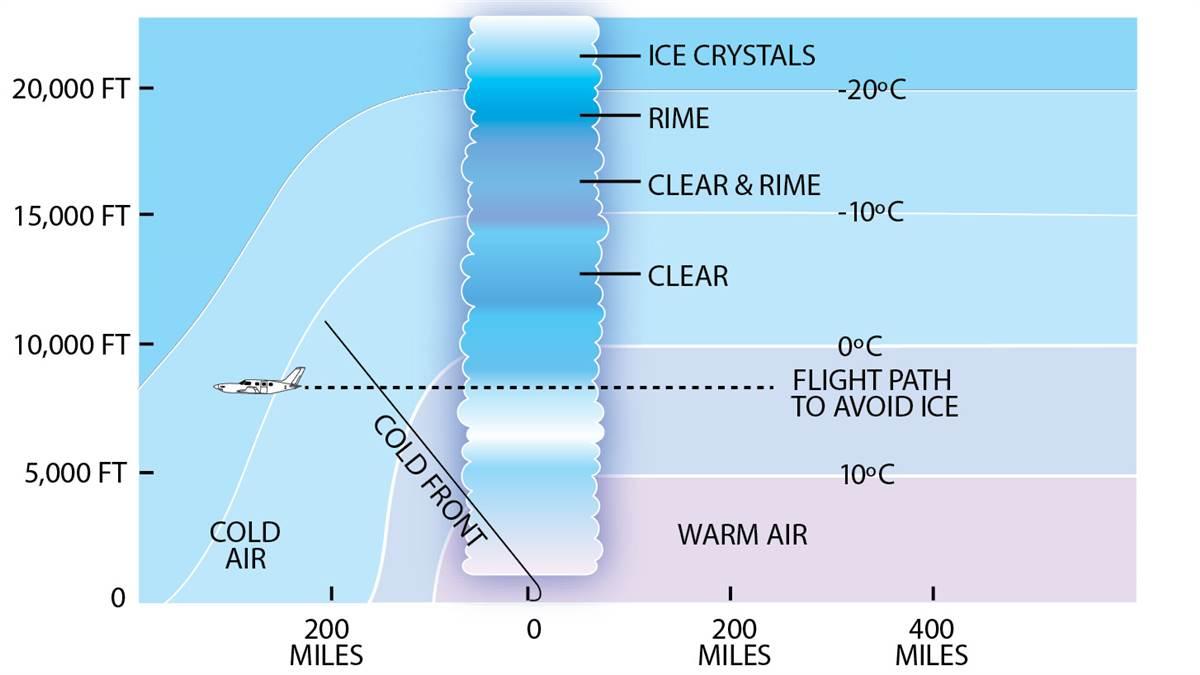 This hypothetical, yet often typical, cross section of cold front icing shows how rising, cooling air can set up bands of vertically stacked icing conditions with altitude. The most dangerous ice accretions—clear, rime, and mixed—tend to occur between 0 and -15 Celsius.

Mixed icing is a combination of rime and clear ice, and has a rough surface that can build quickly and project forward from leading edges. Its pebbly formations are notorious for raising stall speed and creating so much drag that level flight can be impossible—even at high power settings.

Supercooled large droplet (SLD) icing is really bad news. This is the type that’s called out by red stippled areas on the CIP and FIP charts mentioned earlier. It’s most likely to occur within a few degrees of the freezing point, in cumulus clouds that are packed with the largest droplets and highest liquid water contents. Why? Because these tend to occur in systems located over and around the Great Lakes, Pacific Northwest, and New England—where northern latitudes and soggy cold-season lows and fronts like to linger.

One of the first signs of SLD icing is droplets that splatter and create icing on the sides of windshields and other areas that don’t otherwise tend to ice up. Like mixed icing, SLD icing can quickly create unusual shapes. One of them is a double-horned projection that extends forward from the leading edges and other airframe parts. Not only does this create huge amounts of drag, but the formations also block the oncoming flow over the wings and tail, moving the centers of lift and causing control surfaces to make uncommanded deflections. SLD icing is a relatively recent discovery, made possible by some high-profile accidents.

Freezing rain is supercooled rain, and the worst of the icing threats. Unlike the other forms of icing, freezing rain creates no rough surfaces on an airplane. Its droplets are too large, so freezing rainfall can instantly coat an airplane—even one approved for flight into known icing (FIKI)—and render it uncontrollable. It can happen within clouds producing SLD, and even fall from cloud layers into clear skies. This happens beneath warm fronts aloft, when rain falls from the warm frontal surface aloft into the subfreezing air of the retreating cold air below.

Pireps for all forms of icing are the closest we’ll ever get to real-time information. A study has urged efforts to change the way icing pireps are categorized. Instead of relying on the vague trace-light-moderate-heavy descriptors, which don’t acknowledge the differing ways that icing can affect the variety of aircraft types out there, a level-of-effect approach has been proposed. This quantifies the specific performance effects of the reporting aircraft and classifies them according to four levels. What’s missing is the type of icing encountered. Even so, level-of-effect data could be meaningful as an added dataset to what’s already available, if put into effect.

As always, prompt detection and evasive action remain the best ways of avoiding an icing encounter. Yes, ice protection systems like deice boots, bleed-air heated leading edge panels, or electrically heated windshield are nice to have, and can buy you some time. But even these have their limits. 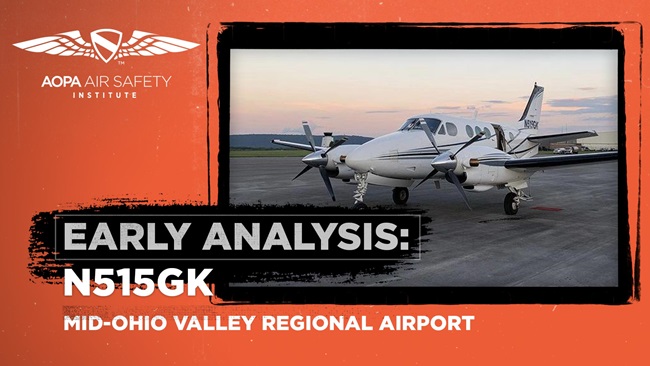