Editor's note: This story was updated February 28 to clarify the NTSB's recommendation.

Concern over potential structural failure affecting rudders fitted to various vintage Piper airplanes prompted the NTSB to call for action, such as replacement of any older-model rudders secured with a particular alloy of steel. 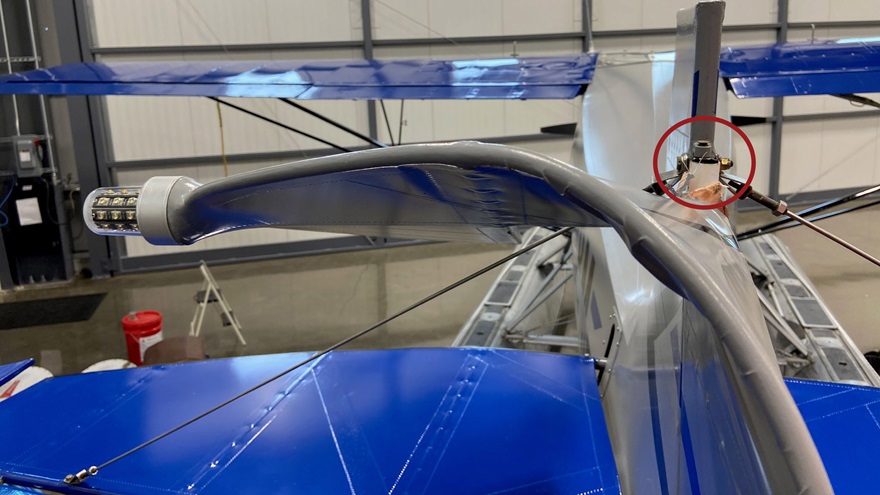 A Piper PA–12 on floats became nearly impossible to control after the airplane's rudder post fractured above the upper hinge (circled) on June 8, 2020, causing the top of the rudder to fold over in flight, one of two in-flight failures investigated by the NTSB, and among five rudders found to have similar failures, as the NTSB documented in a recent report. NTSB photo.

The FAA issued an airworthiness concern sheet in 2020, seeking information about rudder failures from the owners of many Piper single-engine aircraft. That action was promoted by an incident reported by the CFI flying a PA–12 on floats in Anchorage, Alaska, on June 8, 2020.

The reporting CFI was giving dual instruction to the airplane's owner and took control after the pilot flying reported abnormal control feel during a landing attempt. The instructor managed to land the aircraft safely and discovered soon after that the rudder post had fractured just above the top hinge, allowing the top of the rudder to fold over in flight like a basset hound’s ear. The top of the rudder, now roughly parallel with the horizontal stabilizer, created additional downforce on the tail requiring much of the available elevator deflection to keep the nose at the horizon. The instructor deployed the water rudders hoping to regain directional control but assessed that making a 180-degree turn to land on the water was not feasible, and opted for a runway ahead instead.

Just over a year later (on July 23, 2021), the pilot of a 1948 Piper PA–14 reported a nearly identical rudder fracture in cruise flight, also in Anchorage. At first, the pilot wrote in that report’s narrative, the aircraft reacted “as if it was getting light turbulent wind off of the mountain tops,” requiring frequent rudder inputs to keep the ball in the center, which he compared to landing a tailwheel aircraft on a paved surface. “Then yawing began to get worse with slight elevator adjustments to maintain altitude. Then the oscillation stopped and very large right rudder input was required” to maintain directional control. “I determined it would be best to use minimal control inputs with only turns to the left to get the aircraft on final approach.”

The pilot made a successful landing, having increased speed by 10 mph on final as a precaution, and touched down without incident.

NTSB investigators found the two aircraft had much in common beyond being older Piper aircraft based in Alaska. In each case, “NTSB’s findings indicate that the rudder post fractured above the upper hinge and the top portion of the rudder folded over the upper tail brace wires, resulting in diminished control of the airplane.”

Investigators found three more rudders with similar fractures, two provided by repair facilities, and a third that was provided in response to the 2020 airworthiness concern sheet issued by the FAA. All five rudders had a common Piper part number 40622, and posts made from the same AISI 1025 steel, an alloy that Piper discontinued using in June 1974 in favor of another alloy with greater resistance to fatigue.

“Although the five rudder posts that we examined had beacons or strobes installed that increased the posts' susceptibility of failure, our analysis shows that, even without the additional stress of these components, in-service stresses likely exceed the endurance limit for AISI 1025 carbon steel rudder posts that have corrosion, scratches, or surface roughness features,” the NTSB wrote in a report issued January 10. “As a result of the loads study and materials laboratory examinations, the NTSB concludes that it is likely that each of the five recently examined Piper part number 40622 rudder posts, all made of AISI 1025 carbon steel, fractured due to fatigue. The NTSB also concludes that posts made of AISI 1025 carbon steel in Piper part number 40622 rudders are susceptible to fatigue cracking under normal service conditions.”