Editor's note: This story was updated January 14 to include new information.

The FAA on January 13 published 1,478 notices to air missions (notams) related to pending activation of 5G C-band wireless base stations with far-reaching implications for air travel, including emergency medical transportation. 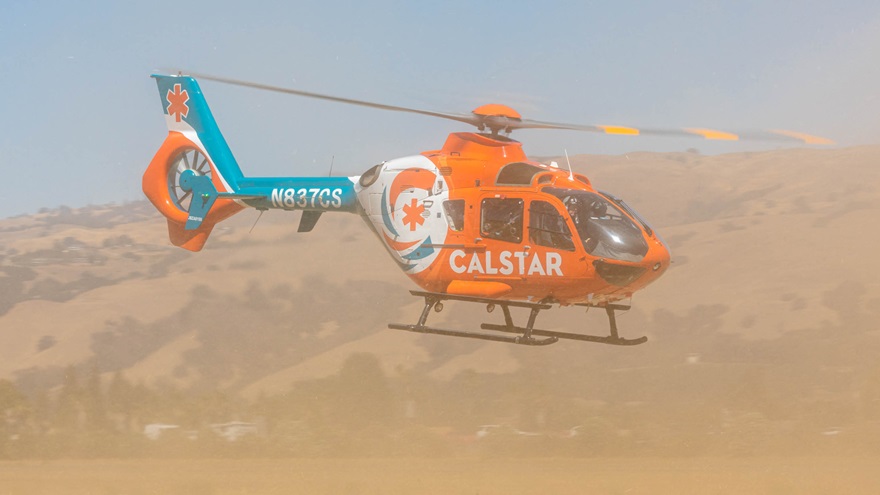 Helicopter air ambulances have been required to use radar altimeters since 2017, and operators are concerned that 5G C-band interference could halt flights in poor weather. Photo by Joshua Lapum Photography.

By January 14, the scope of the FAA action had fluctuated, with some notams being canceled and others added to the list; the overall number of notams related to pending 5G C-band activation hovered just above or below 1,500.

While much of the media attention on the aviation implications for 5G C-band activation has focused on delayed and canceled airline flights that are virtually certain to result from restricting use of instrument approaches and other procedures that rely on radar altimeters, immediate impacts could extend beyond the 1,305 airport notams issued January 13, along with 50 airspace notams and 123 related to precision instrument approaches that require functioning radio altimeters (also known as radar altimeters).

The fluctuating number of active 5G C-band-related notams reflected ongoing, updated risk assessments and changes to limitations imposed, some based on information about the locations of the new 5G C-band towers provided directly to the FAA by wireless operators, though not yet shared with pilots or the public.

The FAA and a coalition of aviation groups including AOPA formed to advocate for a commonsense approach to 5G C-band implementation continued to analyze the effects of the rapidly evolving measures taken to mitigate the risk posed by pending activation of new base stations. By January 14, some concerns had been alleviated, though not all, and the extent of potential disruption that could ensue when the new 5G C-band transmitters are powered up January 19 remained unclear.

The central issue remains potential interference with radar altimeters, which have for decades operated on frequencies near the C-band and are installed in thousands of aircraft, including commercial airliners, some business jets, and many helicopters.

In that last category, helicopters used for emergency medical transportation and flown under Part 135 have been required to have radar altimeters installed since 2017, pursuant to a final rule published by the FAA in 2014. That rule mandated a package of safety requirements and updates, including increased weather minimums that apply to Part 91 helicopter operations.

HAI filed that petition October 29, and several groups and air ambulance operators provided comments in support of the petition, including the Air Medical Operators Association and the Association of Air Medical Services.

The FAA granted most of the exemptions sought, authorizing helicopter air ambulance operators equipped with night vision goggles (once they have submitted a letter stating intent to "exercise the relief granted in this exemption" and agreement with the conditions and limitations of the exemption) to continue providing medical transportation in areas where an active notam would otherwise preclude such operations. Conditions include continued use of the radar altimeter "when it is performing normally," use of an FAA-approved searchlight during night operations, and establishing contact with ground personnel prior to landing. In cases where such communication cannot be established, pilots are required to conduct a high reconnaissance to assess the landing location.

“This was a significant victory not only for HAA operators but for the countless communities and hospital networks that would have been deprived of the critical life-saving support that can only be offered by helicopter operations,” said HAI Government Affairs Director John Shea. “We are very grateful to FAA and appreciate the support we received by way of public comment from AMOA, AAMS and several HAA operators. The big picture here is the FAA’s determinations on the elements of HAI’s petition defined a path for replicating this for certain other helicopter operations that are in the public interest. The ADs and NOTAMs on 5G interference are still going to have a huge impact on the helicopter operations, and we have much more work to do.”

While the FCC has resisted or rebuffed repeated requests from aviation advocates and the FAA to delay 5G C-band activation long enough for aviation safety issues to be properly assessed and addressed, some held out hope for a last-minute reprieve. With C-band activation less than a week away, AOPA and other coalition members continued to seek mitigations of disruption beyond the exemption granted for helicopter ambulance operations that left thousands of other aircraft operations—including airlines, helicopters, and business jets, many of them serving critical public needs—vulnerable to significant flight cancellations and delays.

How it came to this

The wireless operators who paid tens of billions of dollars to license the C-band spectrum have long resisted calls from a coalition of aviation advocates formed to promote commonsense solutions that allow 5G service to expand without compromising safety. While aviation advocates and the FAA have been accused by the wireless industry of waiting until the last minute to voice concerns, the issue has been on aviation’s radar since long before the FCC licensed the C-band frequencies in 2020. The coalition, of which AOPA has long been an active member, reiterated those concerns in 2021, highlighting the risks C-band transmissions pose to sensitive devices used on thousands of aircraft.

With the FAA poised to issue notams that could render certain instrument procedures unauthorized, Verizon and AT&T agreed in November to delay activation until early January. Two days before that activation date, under intense pressure, the two companies agreed to push the date to January 19.

The FAA recently published a list of 50 airports where Verizon and AT&T have proposed operating nearby C-band transmitters at reduced power for six months, though AOPA has learned that this list might be updated, just as the number of notams related to 5G C-band transmission continued to fluctuate following the initial January 13 release. While the wireless industry provided the FAA with a full list of 5G C-band transmitter locations, that information, which would be useful to many pilots, was deemed proprietary, and is not publicly available for flight planning purposes.

For many operators including helicopters and business jets operated at smaller airfields, or away from airports entirely, limiting the power of 5G C-band transmission near major airports, including over runways and for one mile from the approach and departure ends, is irrelevant.

Airline operators and other pilots who rely on radar altimeters for a variety of procedures including precision instrument approaches to major airports in poor weather have warned that flight delays and cancellations are inevitable if C-band transmitters activate without more stringent mitigations in place.

AOPA continues to advocate for a commonsense solution that allows 5G C-band service to commence without compromising aviation safety, and commends the FAA for sharing those priorities. The agency created a website to share information and answer common questions about 5G, including an explanation of how mitigations taken in certain foreign countries are significantly different from what AT&T and Verizon have volunteered to adopt in the United States.

“The FAA has done a superlative job handling a tough problem that would have been much easier to tackle had the Federal Communications Commission acted three or more years ago,” said Jim Coon, AOPA senior vice president of government affairs and advocacy. “Protecting the safety of all airspace users is aviation's most important priority.”