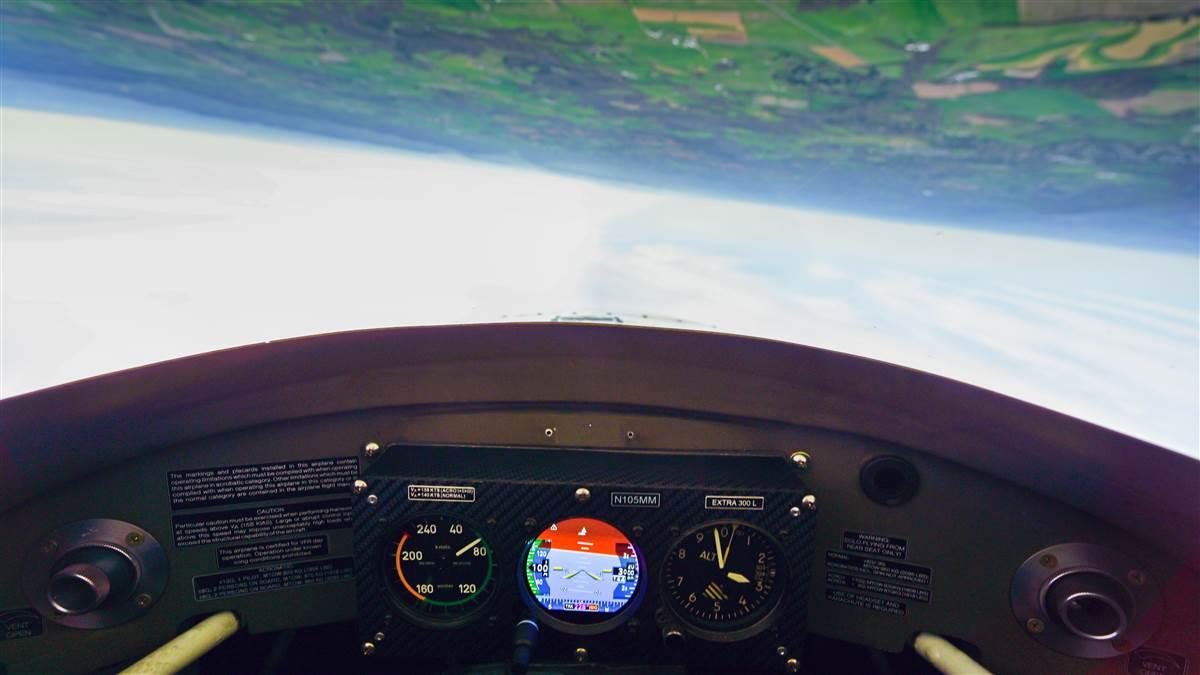 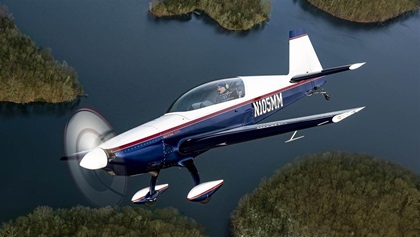 Angle of attack, or AOA, is the angle between the chord line of an airfoil and the relative wind. Increasing the angle of attack increases lift—to a point. When an airfoil surpasses its critical angle of attack, it loses lift, or stalls. As training in the Extra so aptly demonstrates, AOA is unrelated to pitch attitude and the natural horizon.

This old saw has been around so long, and it seems so obvious, that it hardly seems worth questioning. The fact that pulling on the yoke results in a climb, and pushing on it produces a descent, is deeply ingrained during flight training and reinforced on every flight.

That is, until pilot encounters stalls, spins, and unusual attitudes. Then, all of a sudden, the old truism just isn’t true anymore.

Beyond 90 degrees of bank, pulling on the yoke can make the houses get bigger, sometimes at an alarming rate. Similarly, during stalls and spins, the airplane may be in an extreme nose-down attitude yet pulling on the yoke doesn’t raise it. It’s as though the airplane has developed a mind of its own, or it’s possessed. All of it feels terribly bewildering and wrong—especially during an unintentional loss of control in flight.

This tension and confusion is just the area that unusual attitude training is meant to address. And the AOPA Extra 300L is an ideal aircraft to cut through the fog.

The two-seat aerobatic aircraft is rated for plus or minus 8 Gs with two people aboard, so as long as it’s got altitude, it’s strong enough not to be bothered by a heavy-handed pilot’s mistakes. And all pilots make mistakes, especially during novel or ambiguous situations they haven’t encountered before, and when exposed to high gravitational forces that are foreign to them.

Also, the Extra has “honest” flying qualities. It has no quirks or peculiar corners of the flight envelope. Its performance is spectacular, but its behavior is precise and predictable.

Bruce Williams, a veteran flight instructor who owned flew the Extra 300L for two decades before donating it to AOPA, said the biggest benefit to spin training is the hyper-awareness to stalls and spins that comes from repeatedly flying at the edge of an airplane’s critical angle of attack. The crossover point from controlled flight to an aerodynamic stall becomes easily identifiable and well known.

AOPA will produce and share video content that emphasizes these points during the time the association operates the Extra.

“Practicing recoveries from accelerated spins, flat spins, and multi-turn spins is all well and good—but it misses the point,” Williams said. “The unintentional stalls and spins that result in accidents tend to take place at low altitude where recovery may be impossible regardless of pilot technique. The key is teaching stall/spin avoidance in such a way that pilots never unintentionally lose control of their aircraft in the first place.” 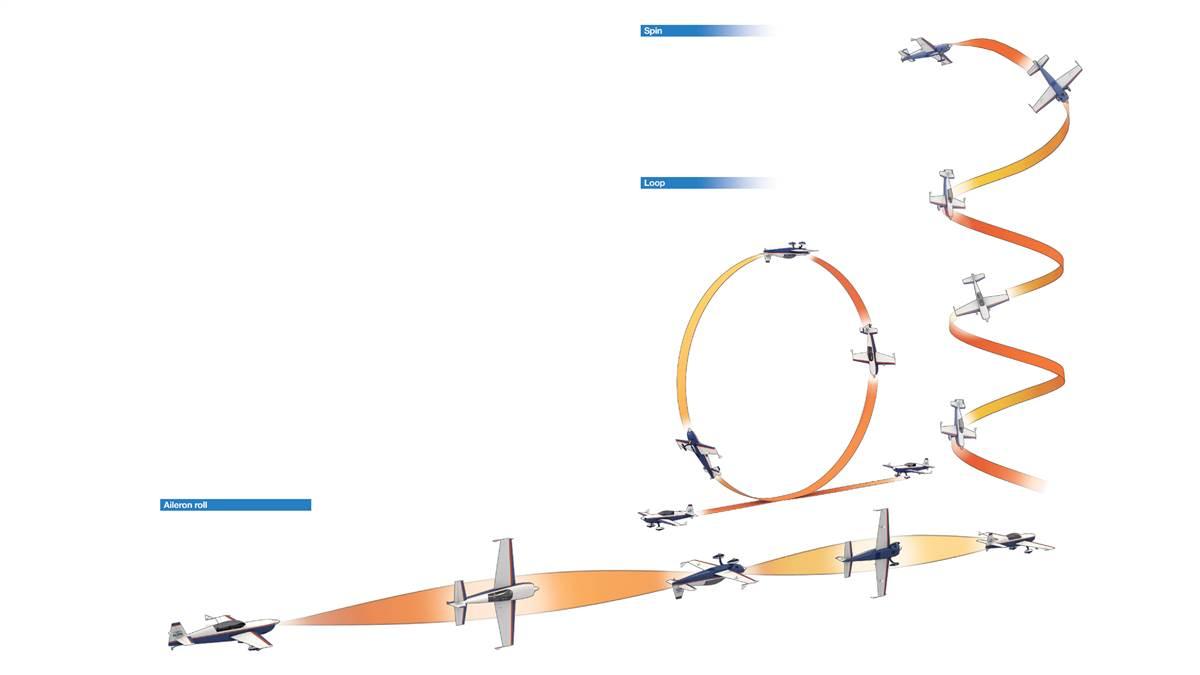 Spin
Spins can be disorienting and intimidating at first, but practicing them heightens pilot awareness of both the critical angle of attack at which the wings stall and yaw—the two essential ingredients of a spin. Also, some bungled aerobatic maneuvers can result in an inadvertent spin, so getting comfortable with spin recoveries is a must for aerobatic pilots.

Loop
The loop requires that pilots look out the sides of the airplane for orientation as the nose rises above the horizon. The Extra’s aural stall warning system can chirp at any time during the maneuver and it’s a real-world example of how the wing can stall at any airspeed and attitude. The cure for a high angle of attack is reducing back-pressure on the stick, and that will silence the chirp at any point during a loop.

Aileron roll
The aileron roll is a fun, confidence-building maneuver in the Extra, largely because of its extremely rapid roll rate. There’s almost no adverse yaw, so the only control input required is aileron. 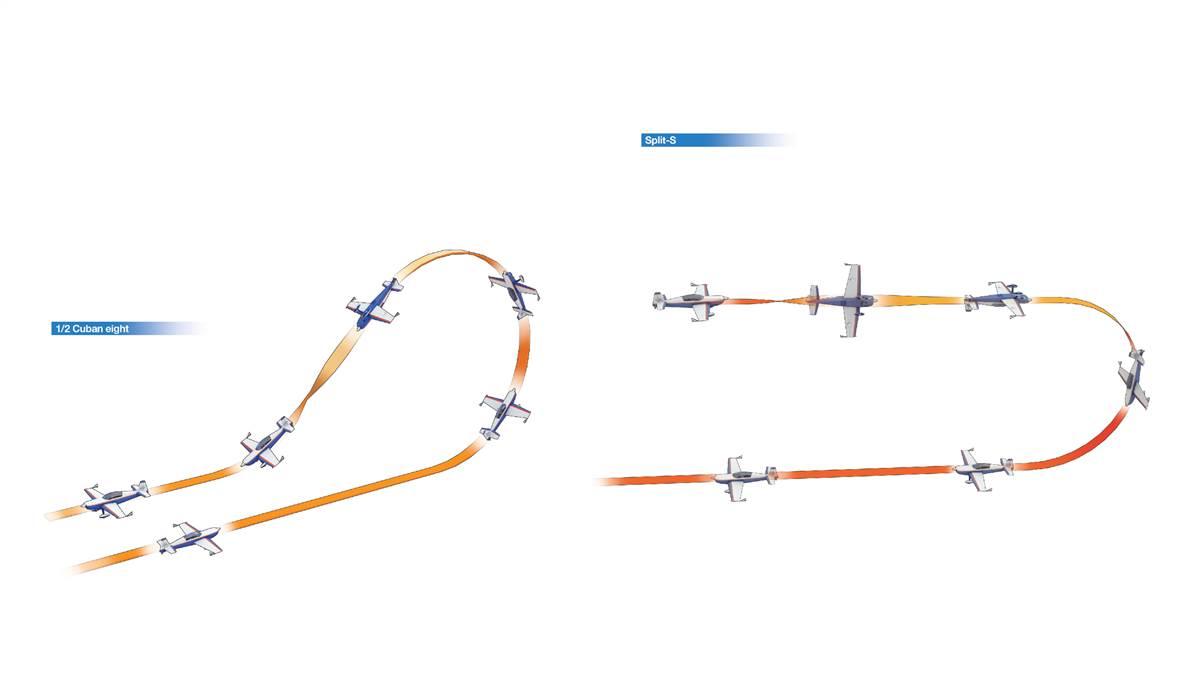 1/2 Cuban eight
This maneuver starts out like a loop and continues that way until just after the half-way point. Then, with the inverted airplane descending at a 45-degree angle, the pilot keeps the nose pointed at the ground and half-rolls to upright. Then, it’s time to pull out of the dive. The airplane should finish the maneuver at the same altitude but reciprocal heading as it began.

Split-S
The Split-S begins with a half-roll to inverted, then a steady pull so that the nose falls through the horizon. The airplane accelerates rapidly during the descent so take care to enter the maneuver as slowly as practical and reduce engine power during the descent. The aircraft should finish the maneuver much lower, faster, and on the reciprocal heading as it began. 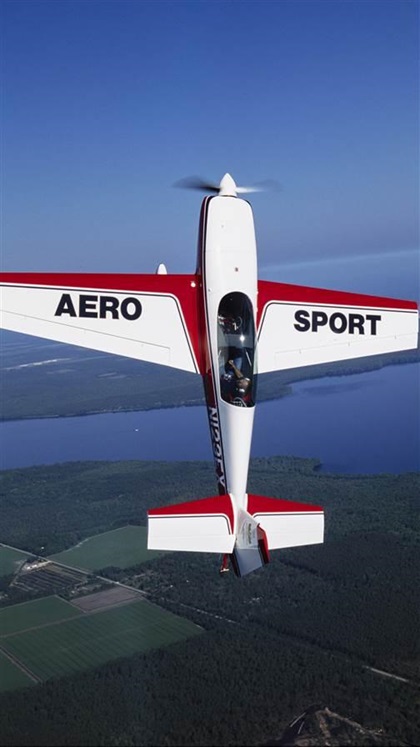 In the Extra, pilots can explore turning stalls, deep stalls, accelerated stalls, secondary stalls, and cross-controlled stalls knowing that they aren’t taxing the airplane’s capabilities. No matter how badly they bungle a maneuver, this unlimited aerobatic airplane will recover without complaint.

It’s the aerial equivalent of learning to drive in snow by going out to a big, vacant, icy parking lot and doing donuts, one after another. Sure, it’s fun to do, and for many teens in cold climates, it’s the highlight of driver training. But its real purpose is safety.

In the Extra during a right-turning stall, for example, at high engine power, it’s common for the airplane to snap to an inverted position when it reaches its critical angle of attack and departs controlled flight. That’s an eye-opener the first few times it happens, but it’s no crisis.

The recovery procedure is identical to all other stalls: Lower the angle of attack (by releasing back pressure on the control stick) to break the stall. Then adjust pitch, power, and bank to recover to level flight.

The Extra flies like other airplanes—there’s just more of everything. More power, more roll rate, and the rudder and elevator authority. Every pilot tends to over-control at first, then they settle down and quickly get the hang of it.

The Extra’s wings are symmetrical and there’s zero angle of incidence—so the airplane flies pretty much the same right-side up or upside-down. The wings have no dihedral, so there’s no inherent stability or rudder coupling. If you’re flying straight and level and a wing dips, you can’t pick it up with opposite rudder. Roll and yaw forces are totally separate and independent.

Aside from its control sensitivity, however, much about the airplane is conventional and feels familiar. There’s an aural stall warning and light airframe buffeting before the stall break. Visibility through the bubble canopy is excellent, especially from the rear seat. The controls are well balanced and forces are linear. Aileron and elevator controls are activated by pushrods—not cables and pulleys—so there’s no slop or play whatsoever. The airplane does exactly what the pilot commands it to do without hesitation.

Aerobatic maneuvers in the Extra can be big, slow, and graceful or abrupt and immediate depending on pilot control inputs. Over-the-top maneuvers such as loops and Immelmanns are an important part of upset training because those maneuvers teach pilots to calibrate how hard they can pull without overstressing an airframe.

In a typical loop, for example, pilots aim to pull about 3.5 Gs at the start and finish of the maneuver. Most FAA standard-category aircraft are rated for a maximum 3.8 Gs in normal flight. That means pilots who learn what 3.5 Gs feels like while practicing loops have a baseline for how heavy they should feel in the seat while recovering from an upset in a Cirrus or a Bonanza.

The only criticism of the Extra from a flight training standpoint is that its performance is so superlative that it doesn’t necessarily transfer to other aircraft categories. With a roll rate of about 360 degrees per second, for example, the Extra rolls about six times faster than a Cessna 182 or a 206.

Companies such as Stallion 51 in Kissimmee, Florida; Flight Research in Mojave, California; and Victory Aviation in Denton, Texas, use former military jets and other relatively heavy and fast aircraft to train corporate and airline pilots in airplanes that are similar to the ones they fly professionally. Aerobatic training allows pilots to confidently and decisively control their airplanes throughout the full 360-degree spectrum of pitch and roll. It also shows them exactly where the critical angle of attack resides, and it introduces the physical sensations of high G loading so they know how much they can ask of an airplane in an emergency.

Loss of aircraft control remains a persistent cause of accidents in airplanes ranging from the smallest to some of the largest, and pilots of a broad range of experience levels can succumb to it. A Super Cub making a tight turn in a mountain valley, a Cessna 172 with a heavy load on a hot day, a Learjet making a tight turn in the traffic pattern, and an Airbus A330 with an erroneous airspeed display have all unintentionally stalled with tragic results. Unusual attitude and spin awareness training in an aerobatic aircraft such as the AOPA Extra 300L give pilots the knowledge and experience to guard against these kinds of mishaps.

With a heightened sense of how airplanes behave close to their critical angle of attack, pilots with this kind of specialized training are more likely to recognize and avoid crossing the line. And if they ever do stall inadvertently, they know to resist the “panic pull” reflex that only makes things worse.

It’s hard to imagine such a fun and exciting form of flying having a more noble purpose. 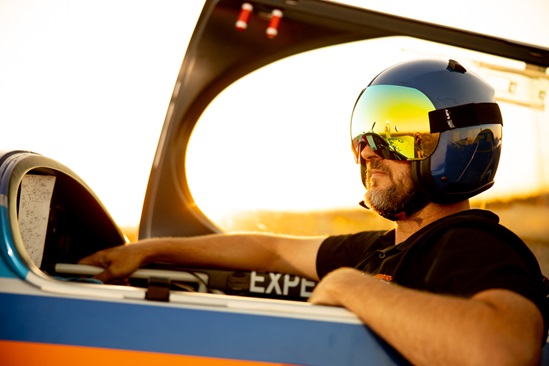 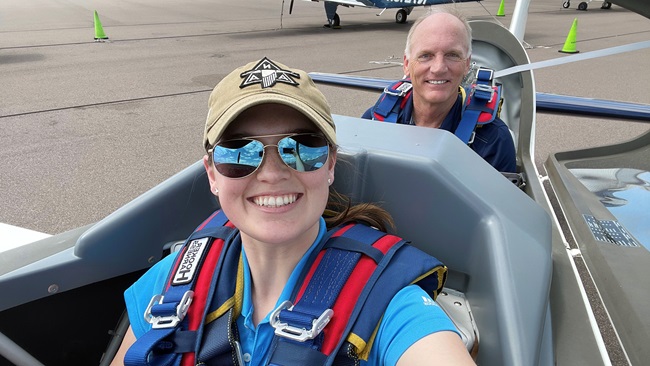 'Make sure your straps are tight' 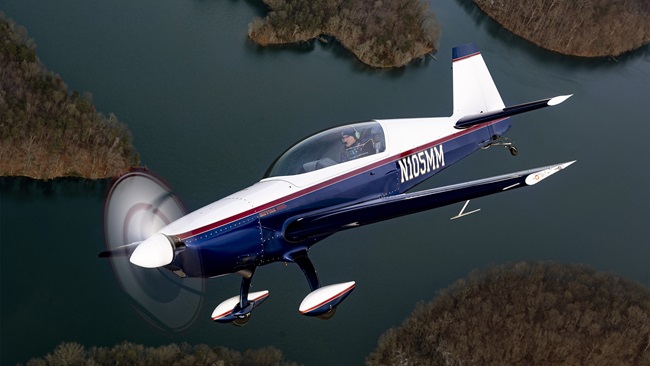