Editor's note: This story was updated March 11 to correct a reference to the author's helicopter experience.

Helicopter Association International’s Heli-Expo was a surprising smorgasbord of treats for a fixed-wing pilot. 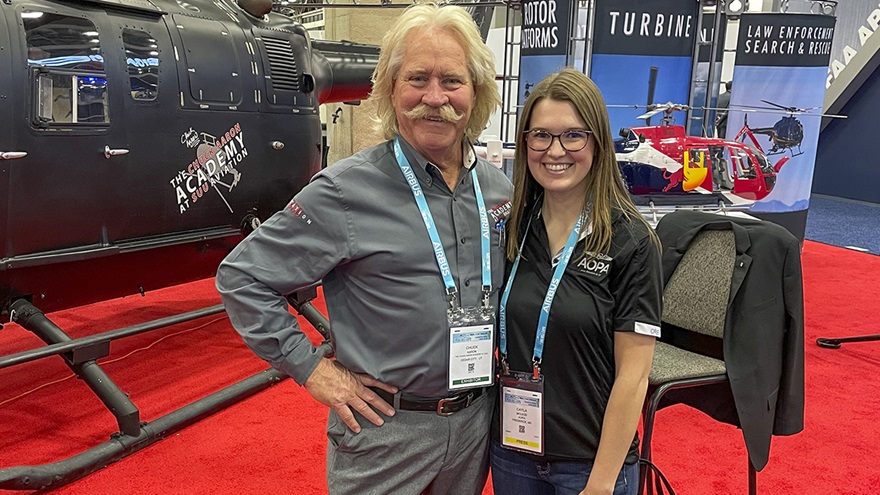 As a fixed-wing pilot, Heli-Expo was never really on my radar. So, when my bosses told me they were sending me to Dallas to report on the show, I started preparing for a few days of boredom. I wouldn’t know very many people, I don’t know anything about helicopters, and it’s a dressy, indoor convention. In short, it is the buttoned-down polar opposite of the tent-camping fun found at my favorite aviation gathering: EAA AirVenture in Oshkosh, Wisconsin.

Setting aside my fear of the unknown (still wondering how I was going to be able to strike up a conversation with helicopter pilots), it was officially showtime on March 8. Once I arrived at the Kay Bailey Hutchison Convention Center I found my way to the press room to gather my credentials. Flashing my press badge got me into the show an hour ahead of the public—a privilege I have never enjoyed before.

As I entered the exhibit hall, I immediately noticed the dozens of multimillion-dollar helicopters that had been meticulously arranged, filling the hall with flash. Although I couldn’t tell you what kinds of helicopters they were without reading signage or phoning a friend, my interest had been piqued.

I took particular notice of a black helicopter with Chuck Aaron’s name on the side sitting near Sikorsky’s exhibit area. Although I may not be the most in tune with the helicopter industry, I definitely consider myself to be a fan of Aaron’s aerobatic helicopter routines.

Robbie Paul, assistant chief pilot and marketing director at Southern Utah University, filled me in on the university’s partnership with Aaron. The program that they created—the Chuck Aaron Academy—is designed to teach advanced helicopter techniques to help pilots survive if they find themselves inadvertently flying into instrument conditions. The mission took on renewed urgency in 2021, when just such an accident killed NBA legend Kobe Bryant and eight others. Aaron said his post-Red Bull focus is on preparing pilots to do better in that situation.

“You only have a minute before you crash,” Aaron said. “We are teaching…upset recovery. It is a staple for fixed wing, [we] want it to be mandatory for rotorcraft.”

Aaron, who has recently retired from the airshow business, hopes that his program at Southern Utah University “carries on the torch.”

Somewhat starstruck by meeting Aaron, I made my way to the MD Helicopters display, where two Embry-Riddle Aeronautical University students were being celebrated for earning two separate MD-500 transition training scholarships. MD Helicopters awarded the scholarships to Darren Mudge, 20, and Oliver Myers, 21. The $12,000 scholarships will be used to help Mudge and Myers achieve their long-term goal of becoming professional helicopter pilots. “This scholarship is a big help because it’s giving that turbine transition time and kickstarting my sprint down that path,” said Mudge.

Enstrom Helicopter Corp., the Michigan-based manufacturer that shut down its shop in January, made a surprise appearance in the form of a group of officers and representatives from MidTex Aviation in Texas. They didn't answer many questions, but they did provide a press release announcing they’ve reached an agreement to purchase all of Enstrom's assets, restart operations at the Michigan factory, and hire back many members of the staff who lost their jobs in January. 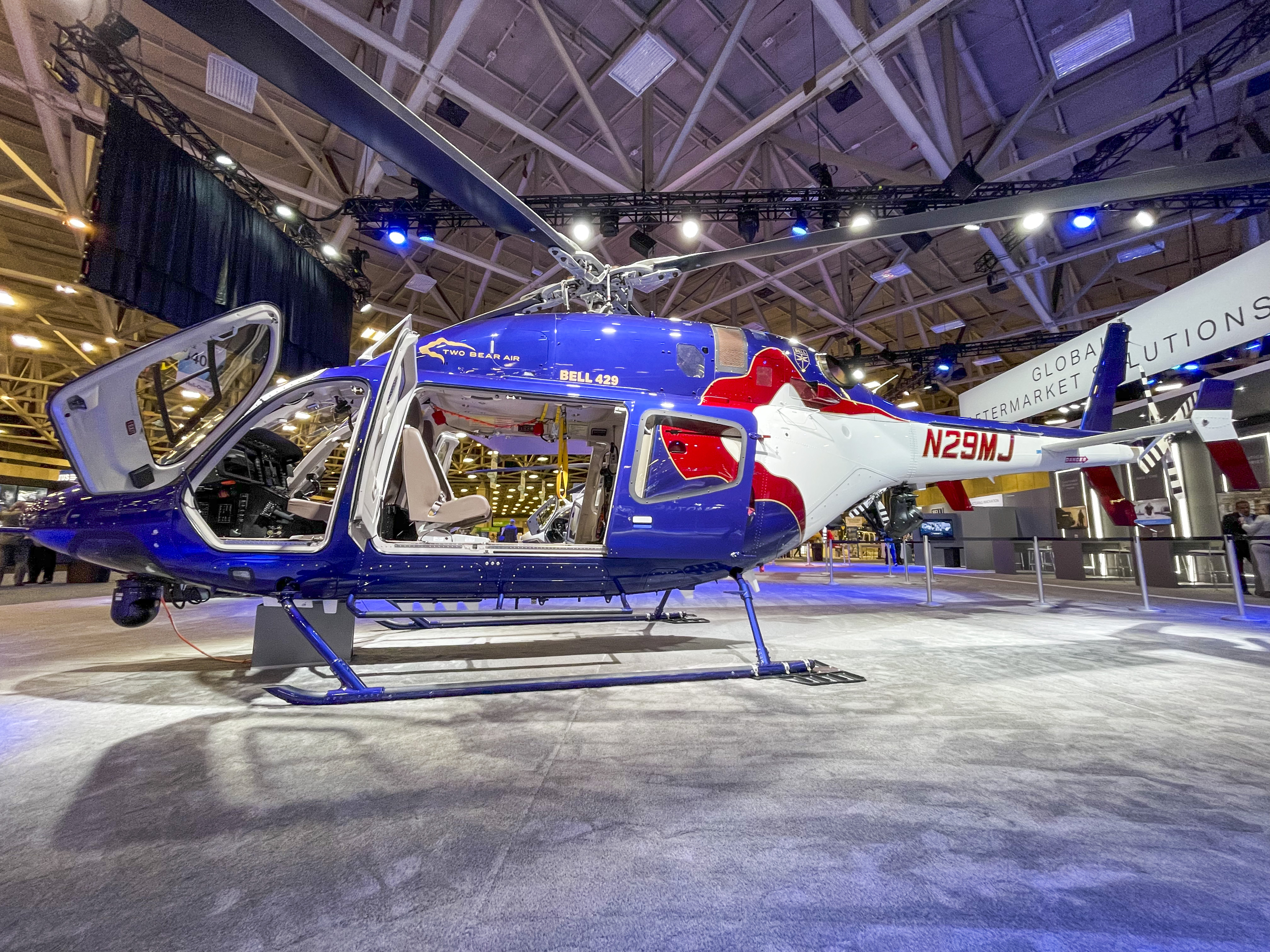 The MidTex representatives said they will rename the company Enstrom Aerospace Industries once the details are finalized, and will continue to “provide parts and support to existing owners, as well as new helicopters.”

Later in the event I managed to find time to meet up with Errick Smith, a friend and sales representative for Bell. After a few minutes of catching up, I admitted to wishing that I knew more about helicopters (other than trying to remember what I learned during an hour of dual in a Robinson R44 four years ago). Smith turned that into his mission when he opened the door on a new Bell 429 and told me to hop in. It was there in the middle of Bell’s temporary showroom that I had my first minutes of helicopter ground school and discovered a new mission for myself: Solo a helicopter.

Parked beside the helicopter I had the privilege of chair-flying was another 429 in a vibrant shade of purple with the words “Two Bear Air” down the side. After a little research and a lead from Smith, I had the opportunity to meet with pilot Jim Bob Pierce, who shed light on the mission for the purple Bell 429: “Without the hoist and the camera we are just a cool helicopter… that’s what sets us apart from the other resources out there…where we live, [in Montana with] 100-foot trees, cliffs, you can’t land a helicopter. That’s where we come in and use the hoist to get [people] out.”

Two Bear Air Rescue is a privately funded organization that provides free search-and-rescue services to individuals stranded in Montana, Idaho, Washington, and Oregon. The foundation is funded by philanthropist Michael Goguen, who spares no expense when it comes to saving lives. Pierce said, “Mike has funded it from the beginning, 100-percent, we have no outside money.” The organization hopes to spread awareness for starting foundations that provide lifesaving services via helicopter. “I’ll fly anywhere in the world to help somebody [start a program like ours.] Just because it’s out of our area it’s still saving somebody’s life… and that’s what our whole mission is for.”

Although I was slightly apprehensive about attending a three-day-long helicopter event, I couldn’t have left the event feeling more thankful for the opportunity to attend. The stories and people from the event left me feeling inspired, the technology left me staring in amazement, and my legs were left feeling quite sore. 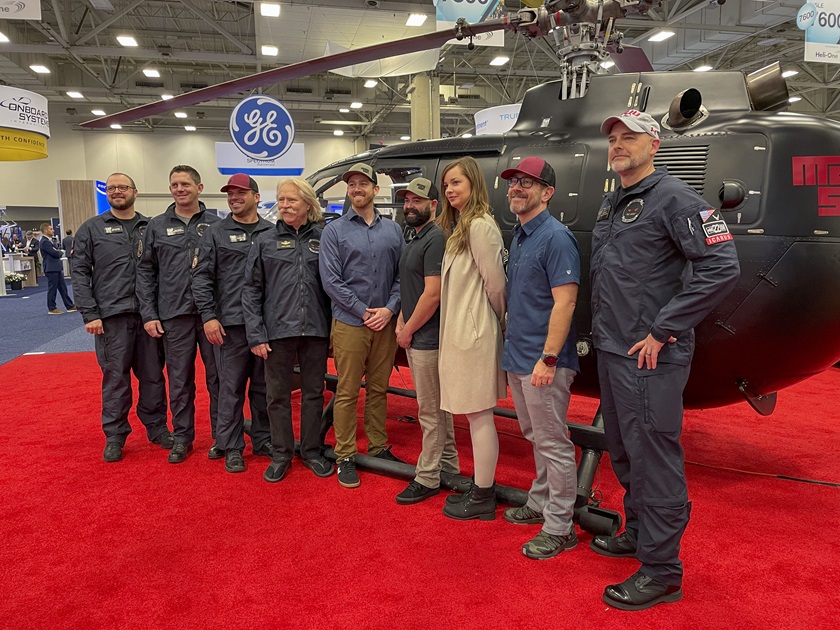