New edition of a classic timepiece made for pilots

Swiss watchmaker Breitling unveiled the 2022 edition of the Navitimer watch with AOPA wings at 12 o’clock. 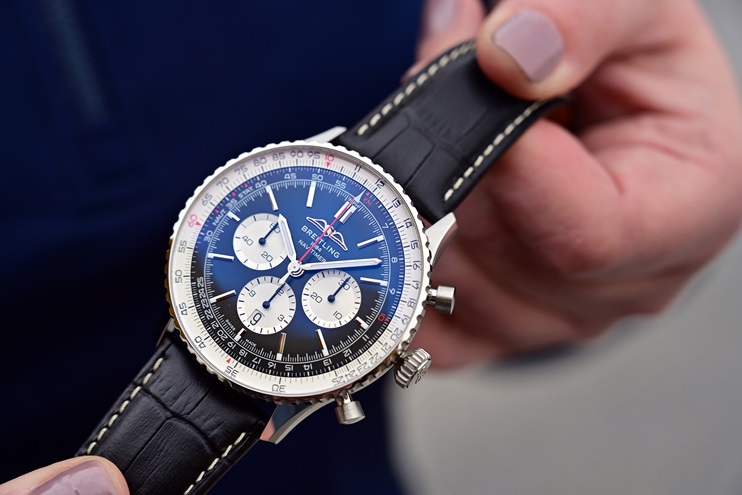 Breitling offers the Navitimer with AOPA wings at 12 o’clock in three sizes with two case materials (18-karat red gold or stainless steel), and a strap made of metal links or the alligator strap shown here. Photo by David Tulis.

Founded in 1884, Breitling was making watches two decades before the Wright brothers created a market for a watch made with pilots in mind. Willy Breitling created the first Navitimer in 1952, crafting a stylish chronometer with the accuracy that navigation demands, integrated with a circular slide rule to make navigation calculations.

Two years later, AOPA made the Navitimer its official timepiece, and AOPA’s wings were added to the watch face. Another version of this navigation-timer was worn in space by astronaut Scott Carpenter in 1962, adapted from a 12-hour display to a 24-hour timepiece to help differentiate day and night when orbiting the planet made such distinctions less obvious.

While the functionality as a navigation aid helped make the Navitimer popular among pilots and astronauts, its style made it a must-have accessory for celebrities including Miles Davis, Jim Clark, and Graham Hill. 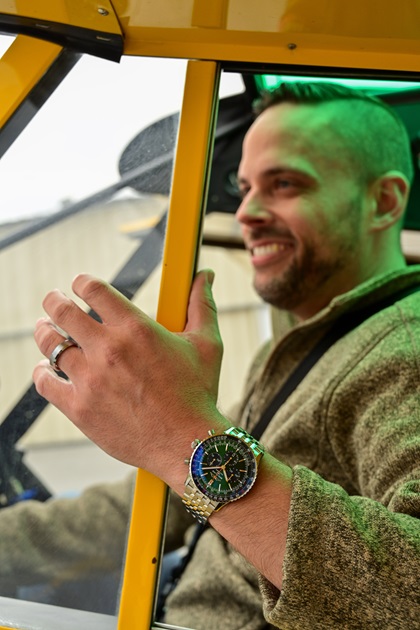 The 2022 edition of the Navitimer retains key elements of the original design that made the Navitimer an icon of horology and fashion, Breitling noted in a press release announcing the seventieth anniversary edition of the Navitimer. The circular slide rule, baton indexes, three chronograph counters integrated in the face, and notched bezel mark this watch as a Navitimer, though closer inspection reveals a few modern refinements. The slide rule has been flattened, and the crystal has been domed to give it a more compact profile. Alternating polished and brushed finishes give the metal elements “a lustrous, yet understated quality.”

The movement, backed by a five-year warranty, has 70 hours of reserve power when the watch is standing still, and not being wound by the oscillating weight that powers the movement while the watch is worn.

Breitling offers the new Navitimer in two case material options­­ (stainless steel or 18-karat red gold), and three sizes: 41 mm, 43 mm, or 46 mm. The watch strap may be fashioned from metal links or alligator skin. The price varies through a wide range, depending on selected options, from $9,000 to $39,500.

Breitling lined up a few more stars to wear its 2022 Navitimer, assembling a “Navitimer Squad” of basketball superstar Giannis Antetokounmpo; American Ballet Theatre principal dancer Misty Copeland; and aviation pioneer and explorer Bertrand Piccard, who completed a journey around the world in 2016 in Solar Impulse 2. Piccard took turns flying legs along that journey with project co-founder André Borschberg, and Piccard was at the controls of the revolutionary aircraft for the final leg, a life experience that fits well with Breitling’s Navitimer advertising campaign, “for the journey.”

“We don't throw the term ‘icon’ around lightly,” said Breitling CEO Georges Kern, in the news release. “The Navitimer is one of the most recognizable watches ever made. It’s on collectors’ lists of the greatest watches of all time. What began as a tool for pilots has gone on to mean something profound to every single person who has had this timepiece along on their personal journey.” 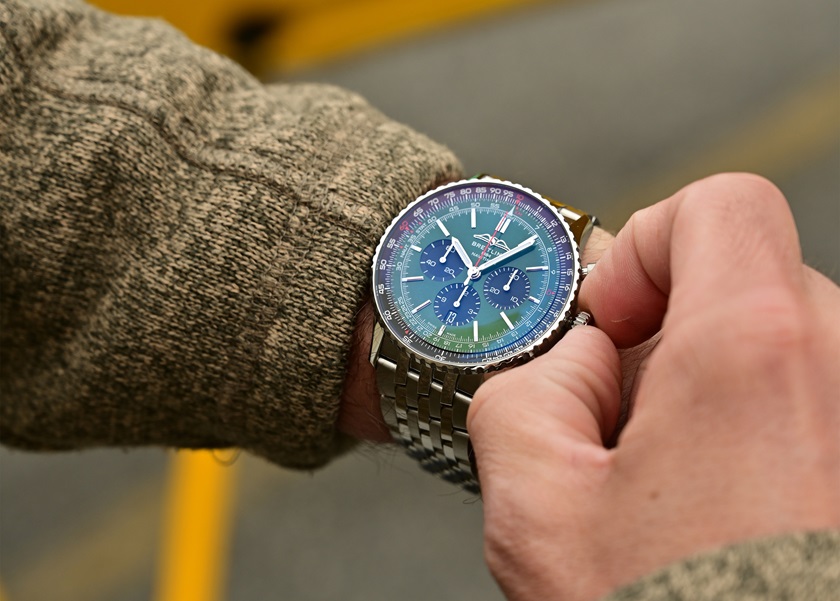