Aviation excitement abounded as more than 2,000 attendees—including pilots, aspiring aviators, and public officials—took part in a Fly Into Fall open house at Midland Airpark in Texas on August 27. 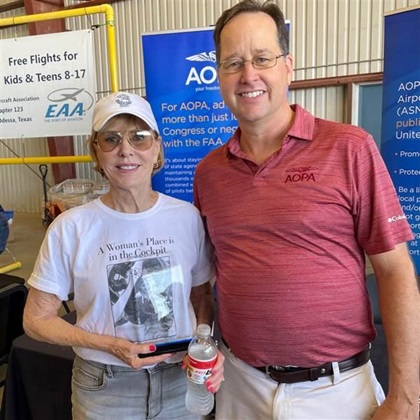 By opening the gates and introducing the public to general aviation, the event was a step forward in bringing the local community closer to the airport. Organizers were pleasantly surprised by the number of attendees—more than triple what they anticipated.

Festivities kicked off with a 5K on the runway followed by the Fly Into Fall event, which included exhibits from Midland International Air and Space Port tenant AST & Science, a Commemorative Air Force fly-in, classic cars, and food trucks. Speakers included Rep. August Pfluger (R-Texas) and former NASA astronaut Don Thomas, both of whom participated in Q&A sessions. Aviation was front and center with flight simulators and a drone obstacle course, but perhaps the most exciting part of the event was the opportunity to take discovery flights courtesy of Floris Flight Services.

The liveliness, mood, and scores of attendees supporting the airpark were a far cry from the closure threat Midland battled in 2021, when the airpark’s future was ambiguous with serious discussions of relocating the GA airfield in favor of land redevelopment.

At the time, AOPA worked diligently with Airport Support Network volunteer and pilot Vicki Hurt to defend Midland Airpark. Together, AOPA and Hurt rallied more than 200 pilots, tenants, and local business leaders to oppose its closure—arguing it was an economic benefit to the community. Ultimately, the city agreed, and following a cost analysis study and an obvious outpouring of support from the local community, the decision was made to keep the airpark open.

AOPA presented Hurt with an award for her perseverance and work to fight off the closure threat. As a pilot based at Midland Airpark for decades, Hurt hopes others will continue to take notice of the opportunities the airpark offers the community and local businesses.

City Councilwoman Robin Poole, who attended the event, was instrumental in the vote to save the airpark—calling it an asset to the community. “Midland Airpark has always been a hub of commerce, but hasn’t been well-known to the community. Fly Into Fall was an integral first step in introducing the people of Midland to Airpark by showcasing aviation, its people and its industry through interaction and hands-on experiences,” said Poole.

Moving forward, city officials hope to invest even more into the airport with plans to add more hangar space, and redevelop signage, roadways, and fences.

Thanks to its success, the city plans to make Fly Into Fall an annual event for Midland.